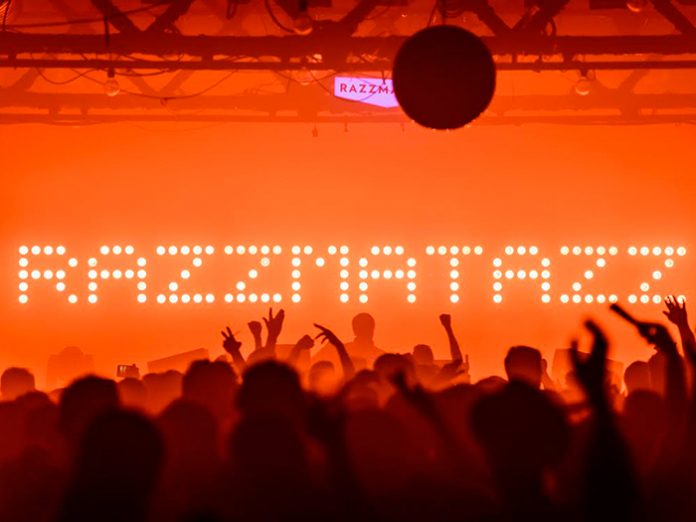 One of Barcelona’s flagship nighttime hotspots, Razzmatazz, continues to innovate in order to stay among the region’s top entertainment venues. A recent installation of Elation Professional Cuepix Panel LED matrices has added to the venue’s visual possibilities, whether for a live music performance or a night of clubbing.

Known throughout Europe as a must-visit venue, a myriad of artists have stepped onto the Razzmatazz stage over the years, including big names like Coldplay and Kanye West. Razzmatazz uses its 3700m2 of space and five distinct spaces in a variety of ways however. On weekends for example it transforms into a nightclub and its various rooms can be used to host parties, fashion shows, galas or virtually any event. The five separate spaces – Razz Club, the Loft, Pop Bar, Lolita and the Rex Room – can also function as one with the advantage of creating different ambiences at the same event.

The 4,000-capacity venue has a house lighting rig but for some bands and DJs additional lighting equipment is hired in. “Usually we receive guidelines from an artist’s management team regarding the aesthetic look that the band wants to achieve for their show,” explained Magdalena Kozlowska, Lighting Manager at Razzmatazz. ”We have always liked warm-white incandescent matrix blinders and have hired them repeatedly for many concerts. Once we were shown the Elation Cuepix Panel it became instantly obvious to us that they would become a hit at our venue.”

The Cuepix Panels are LED matrix blinders with 25 RGBW LEDs per panel and are often split between the Loft, where they are used as an LED wall behind the DJ booth, and the venue’s main concert space, Razz Club, although the fixtures may be used in any of the venue’s five spaces. “When we have live concerts we often position them standing on the stage floor, or hung individually from truss sections,” Magdalena stated. “When we use them with video content and Art-Net, mostly for our nightclub events with international DJs, we usually assemble them in 10 x 1, 5 x 2 or 3 x 3 configurations, and other times over tripods.”

Technical Director at Razzmatazz, Xavi Prats commented: “Our experience with the Cuepix Panels has been a very positive one.” The value for money is very high. Also we have received many positive comments from visiting lighting techs and LDs that work with the bands and DJs that visit the venue and that has made us offer the panels now to all the visiting artists, not just for use for our club nights.” Xavi praises the unit’s easy, intuitive and fast set-up and assembly, along with its sturdy build. “They are quite sturdy while at the same time have a weight that makes their handling very manageable by one person on his own,” he stated. “One of their main advantages is the versatility of the fixture since it can be used with three different control protocols (DMX, Artnet, Klingnet). Another advantage is the myriad of creative possibilities that the fixture offers you when programming a light show.”

“They have a great versatility of colours,” Magdalena added, “a much smaller power consumption than traditional matrix blinders and even when we take them to full brightness, they are very pleasing on the eye and never blind your retinae. Personally I like the look when they are assembled and forming an array. It looks very clean and the VJ team, using Art-Net and VJ creation software, have achieved quite incredible looks in far less time than what it would take to replicate those looks by programming every step and chase on a traditional lighting board.”

“When it comes to concerts though, I personally like them better with each unit as an independent light source, as this option produces very beautiful colour washes on stage, kind of like an immersive colour drape,” she continued. “I also like them as backlight behind the artists on stage, pointing at the band and the audience.”

The panels often run pixel-mapped effects with content coming from a media server. Razzmatazz’s resident VJ Eloi Costilludo mostly runs monochromatic shapes and patterns across the panels, following the rhythm of the DJ’s music. He commented: “The panels show minimal delay when I feed them content and they are extremely bright. I also like the ease of cabling them by way of inexpensive Cat-5 cable runs and the total control that I have over the units from my VJ software installed in my laptop thanks to the Art-Net protocol. When I communicate directly with them through Art-Net I have complete control over their output, since it is not being fed from a lighting board. Therefore I only have to take care of the DMX and IP addresses of the set-up. This allows me a creative range and use of the Cuepix Panel fixtures in a deeper way than by programming steps and chases on a lighting board or by making use of the built-in chase macros.”

The Cuepix Panels are certain to be busy this fall as Razzmatazz celebrates its 15-year anniversary with a special lineup of gigs, not to mention the popular club nights and other special events.