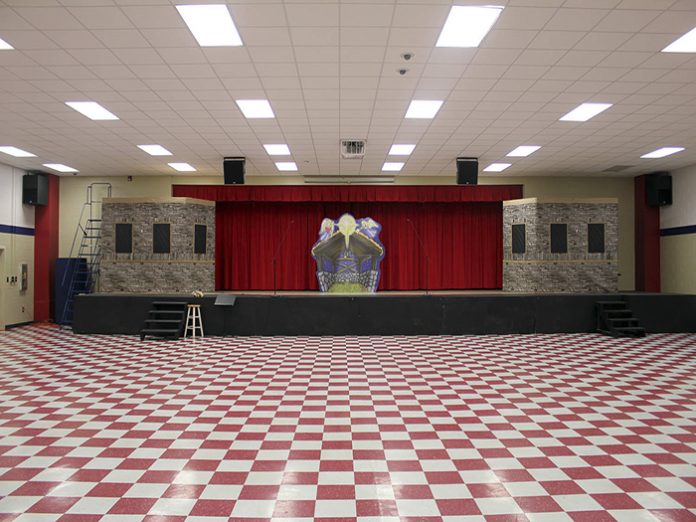 Recently, dB Integrations, of Gainesville, Georgia, updated the sound reinforcement systems in three of its spaces – the school gym, the school theatre, and the church gym using Danley Sound Labs loudspeakers and subwoofers for improved intelligibility and musical impact.

Neil Philpott, sales consultant at db integrations emphasised: “The old sound system in the school gym was a product of old school ‘grab-some-speakers-from-the-music-store-and-call-it-good’ thinking, the church decided to improve that situation when the work could coincide with the refurbishing of the floors and the installation of additional bleachers.

He continued: “The other big advantage of using Danley boxes in a situation like this is that Danley pattern control is excellent and extends octaves deeper than other manufacturers. The mono system is elegant in its simplicity: four Danley SM100 loudspeakers cover the bleachers, two to a side, with a fifth SM100 firing straight down over centre court.

An additional Danley TH115 subwoofer flown over centre court fills out the deep low-end content for the entire room. Neil explained: “We had some of the tech guys, who normally run the church’s big sanctuary system, attend our set up procedures. They were blown away by how much honest low end this system was able to deliver

“They said we were outperforming the bass in the main sanctuary by nearly a full octave!” BiAmp Nexia processing, Crown XTi-Series amplifiers, and a portable Allen & Heath console complete the system for a huge number of configurations and event types.”

“They had their first performance two weeks after we completed the work, there were no feedback problems, and you could hear what every student was saying without straining. The technical director at the church commented that the school’s theatre is now the best-sounding room at Sherwood, big-time sanctuary included!”

The gym at Sherwood Baptist Church has bleacher seating only on one side; dB Integrations covered it with three Danley SM100’s and angled them such that their patterns extend from end to end and out to mid-court. In addition, a Danley TH115 subwoofer hangs at centre court. Again, Crown XTi-Series amplifiers power the system with processing from another Ashly 3.6SP.

Neil explained: “The church had suffered with a terrible sound system in the gym for nearly 15 years , it makes integrating these Danley systems even more gratifying: not only do we give them great sound, we relieve them of anxiety giving technical ministry partner’s like Sherwood Baptist and Sherwood Christian Academy the confidence that they’ll have a fantastic system for years to come.”