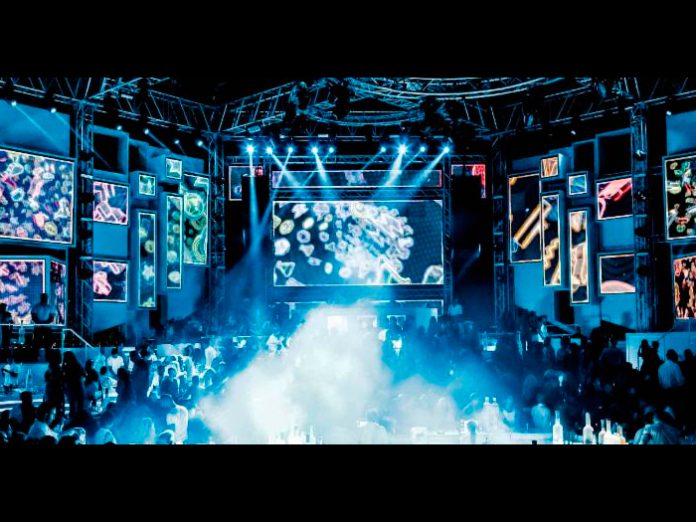 A team of Avolites S4 servers, Expert Pro console with Wing and TitanNet Processors were deployed to control more than 350 fixtures and 150 sq metres of LED screens for an extraordinary party to open WHITE Club Dubai’s new season.

Procom Middle East, the Dubai-based professional audio, lighting and video equipment supplier and Avolites official distributor delivered the venue at the request of Addmind, the venue’s owner and manager.

They teamed up with club lighting designer Dave Parry of Most Technical, lighting programmers Ross Chapple and Tony Chidiac, and Immersive’s John Munro and Martin Harvey to create the awesome event.

Two Avolites Ai S4 servers were specified to control over 150 sq metres of LED screens and over 200 pixel bars. Immersive created the spatial design of the installation and produced all the custom video and animation for the venue.

“The large amount of LED made of 36 separate facets had to be efficiently arranged over three processors which made the Ai S4 perfect for the complex task of mapping,” said John. “It meant that we could run multiple layers of 3.2k custom content while simultaneously mixing effects and using live capture in different ways.”

The screen was ‘chopped up’ into 12 segments, allowing it to be isolated and used in a mixture of ways within Ai.

“The S4 was configured to a MIDI controller, to be able to mask out any of the screens with a hit of a button, as well as play each layer like a piano keyboard,” John continued. “We wanted the experience for the VJ to be seamless and for the server to be an extension of their body’s rhythm.”

More than 350 fixtures were used on the night, including Cyclops Zoom 37 and CPX436-MZ, and Philips Showline SL NITRO 510C strobes. An Avolites Expert Pro with Touch Wing controlled the entire lighting rig, with two Avolites TitanNet Processors expanding the universes controlled and providing increased reliability and control over the massive set-up.

“My role on the project was to program all fixtures using the Expert Pro and Touch Wing, in a way that would make sense for an in-house operator to use over the course of the season,” Programmer Ross Chapple explained. “The circular stage was the centre point and focus of the design with fixtures on the legs of the ground support through the joining cross-trusses and finishing on the concentric rings above the central stage. Fixtures on the rings were used predominantly for fully cue-listed intro moments and dance acts.

“The Expert Pro was the ideal desk for this – its wealth of faders being one of the primary reasons. This is also expanded on significantly when a Touch Wing is introduced. Having to store palettes on the expert faders would have meant storing playbacks across more pages, which in a club environment where fast paced busking is key – having to frequently change back and forth between pages is not the ideal scenario. The new Key Frame Shape generator was also put to good use, making the creation of more complex shapes quicker and easier,” Ross continued.

The x2 Avolites TitanNet Processors were used to expand the number of channels controlled from 4 universes to over 12 universes. “Reliability was also key,” said Rami. “The processing power of the units allows for delay free command on the club fixtures.”

The TitanNet Processor (TNP) enables any Titan console to be expanded to a total of 64 universes. Each TNP processes up to 16 universes of which 8 are provided as DMX512 on the unit and all 16 universes are available via Art-net over the dual Ethernet port.

WHITE Dubai is a high-tech and ultramodern space that markets itself as ‘the ultimate go-to party destination to steer anyone’s evening escapades in the right direction, a night full of energy, thumping music and an overall feel-good vibe’. The club will be open on weekends throughout the season.