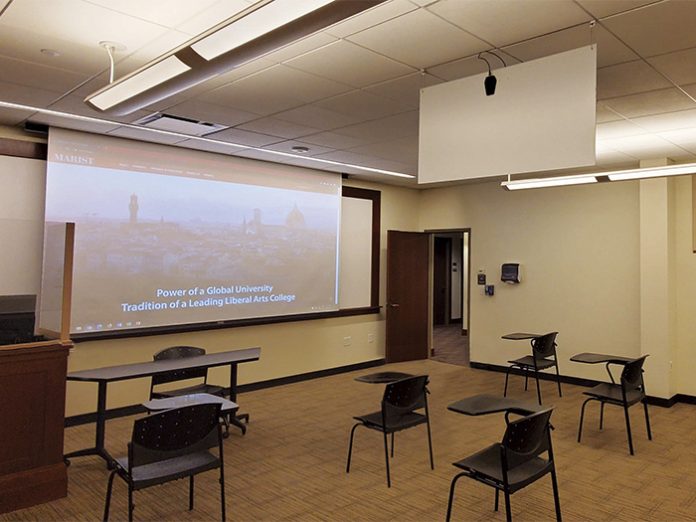 During the COVID-19 pandemic, literally every aspect of life has had to be rethought, but few verticals have faced hurdles like education is facing today. Whether or not to hold classes in person or remotely has become literally a fundamental choice. Marist College, a private liberal arts college founded in 1905 in Poughkeepsie, NY, faced those same difficult options as it readied itself to start the new school year in late August. Unique technology solutions from Audio-Technica, a leading innovator in transducer technology for over 50 years, made that task infinitely easier and successful. The school acquired and installed 150 Audio-Technica U851RO Omnidirectional Condenser Boundary Microphones and 50 ATDM-0604 SmartMixers®, which now outfit 50 classrooms at the school. But the story of how this project came about is an education in itself.

“We wanted to offer a learning experience as close to traditional in-person classes, using a blended synchronous model in which the teacher and half the class are live and the other half are remote, while still conforming to all the New York State and Department of Health requirements and staying within our budget,” explained Lee Walis, Manager of Technical Services at Marist College, an AVIXA Certified Technology Specialist who would design and install the systems.

“At first, I thought we’d need a high microphone count in each room, at least five in the smaller classrooms and a minimum of ten in the larger lecture halls, as well as multiple mixers per room to handle a variety of different processing needs. An additional design requirement is to include a voice-lift feature, because the instructors and students would be wearing masks. It was going to be a complicated project and the microphone costs alone were going to be substantial.”

However, Lee began to look into the idea of using boundary microphones, and discovered the Audio-Technica U851RO Omnidirectional Condenser Boundary Microphone, which incorporates key unique features such as the UniSteep filter and UniGuard RFI-shielding technology, and also is equipped with self-contained electronics, eliminating the need for an external power module. Using one U851 attached to a classroom’s podium and two more attached on either side of a piece of Dibond aluminum / polyethylene composite sheeting hung near the classroom’s ceiling-mounted projector, he was able to cover each room in full in terms of picking up instructors’ and students’ voices.

“You can hear students from the back of the room, with masks on, no problem,” he said, “and the pickup pattern on the boundary microphone means the professor isn’t closely tied to the podium, so everything feels very natural. And the microphone rejects HVAC and projector-fan noise, which would have been a problem with the choir-type microphone arrays we considered in the beginning.”

In addition, Lee is using Audio-Technica’s ATDM-0604 SmartMixers, one in each of the 50 classrooms he’s outfitted for the start of the semester. “The processing is fantastic,” he said. “We’re not doing sound reinforcement for the room mics, so there’s no feedback, even as we’re picking up the softest voices in the room. And even with such a variety of acoustical environments — some classrooms have absorptive carpeting while other have reflective linoleum flooring — we’re getting clear speech intelligibility and predictable response. Plus, the USB output on the mixer is our portal to the computers running either Webex or Zoom for the distance-learning part. In fact, where I thought I was going to have to program the DSP for each room, it turns out that with the ATDM-0604 and U851RO I can have the exact same program in every room, with only minimal adjustments needed for a few rooms with extreme conditions.

“So, we were able to drastically reduce the number of microphones needed, and use fewer mixers, and I could tune one system once and use that same program in virtually every classroom, thereby reducing labour,” Lee continued. “We were able to accomplish all of this at a fraction of what we though it would cost, which for a small, private college is an achievement, even without the issue of the pandemic. What we’ve accomplished here with Audio-Technica would be a spectacular mic-array-and-mixer package for public schools, which are also budget-challenged today. We’re planning on using these same components as a standard for all future classroom builds.”