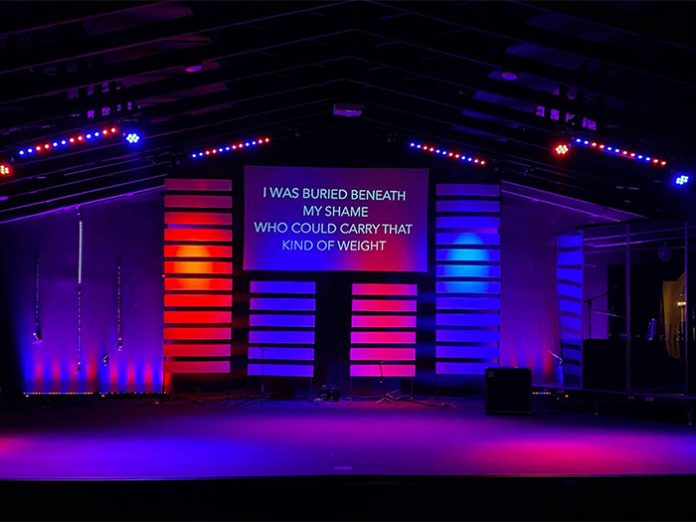 Earlier this month, Essential Church in Huntsville, Alabama, upgraded their stage lighting to improve the production quality of both in-person services and the footage they capture for online broadcast. Conventional fixtures were replaced by energy efficient LED lighting from ADJ and sister company Elation Professional, improving the aesthetic appeal of the stage and at the same time reducing the church’s energy bill.

Like most religious congregations around the world, Essential Church have made online services a major priority this year. However, as they experimented with filming their worship and teaching in their auditorium, they realized that the lighting setup, while adequate for those attending in person, was limiting the quality of their video recordings. They brought in Christopher Watts of Watts Technology to advise on a cost effective, efficient and effective solution to add creativity to their stage lighting and also improve the quality of their online broadcasts. In turn, Christopher brought in lighting designer and regular collaborator Thomas Griffin of Lti Productions.

After visiting the church and discussing with leadership what they were looking to achieve from their lighting, Thomas designed and specified a new system. The current conventional front lighting fixtures were replace with LED fixtures, new LED pars and battens were installed above the stage, while a small number of existing LED fixtures were repurposed and integrated into a new DMX control system, which Thomas programmed to be easily operated by the church’s volunteer tech team.

Four of ADJ’s Ultra Hex Bar 12 LED color wash battens were fitted to lighting bars hanging above the stage, parallel to the room’s apex ceiling, with the inside pair positioned towards the back of the stage and the outside pair towards the front. Each of these versatile fixtures feature 12 10W hex color 6-in-1 LEDs (RGBAW+UV), which are grouped into 6 individually-controllable pairs. Offering a beam angle of 40-degrees, the units feature ADJ’s magnetic ‘Quick Align’ end locking system that means multiple units can be easily positioned end-to-end for a seamless output of light with no break in the spacing of the LEDs.

“The addition of backlight was an important part of the solution to the church’s broadcast lighting problems,” explained Thomas. “When you film someone on stage with just front light they look flat, the backlight adds a bit of a halo effect and separates the person from the background and makes them look more three-dimensional and lifelike on camera. I like the Ultra Hex Bar 12 because it is a double hit fixture, you get a nice wash but you can also use the pixel control (in groups of two) to create chase patterns.”

To further enhance the church’s online broadcast quality, as well as the look of the stage in general, Thomas put in four of ADJ’s 5P Hex LED par fixtures. These were positioned beside the rear Ultra Hex Bar 12s and angled backwards to wash a series of four scenic elements the church had constructed, each consisting of multiple white rectangles. The 5P Hex is a compact fixtures with 5 x 10W HEX color 6-in-1 LEDs (RGBAW+UV) and a 30-degree beam angle. It features a dual hanging yoke that can be used to either hang the fixture – as in this case – or set it on the ground.

“The 5P HEX is a nice fixture,” commented Thomas, “it’s not the brightest LED par in the ADJ range, but plenty bright enough for this size of space. The beam angle is good for backlight and the hex LEDs provide plenty of colour mixing choice. It is also cost effective, which meant that it fit within the church’s budget for this project, but it also provides the reliability that I know I’ll get from an ADJ fixture.”

To replace Essential Church’s power-hungry conventional front lights, Thomas chose the SEVEN PAR 7IP from ADJ’s sister company Elation Professional. With 7 25W 7-in-1 RGBAW + Lime + UV LEDs and a CRI of 90, it is an extremely bright fixture ideal for washing a stage in absolutely any colour that is required.

“The SEVEN PAR 7IP is a great fixture,” enthused Thomas. “I really love everything about it. In my opinion, you can’t get a better light for the money. It is small, punchy and incredibly well built. Because it has a high CRI it is ideal for use as front light, and you can get a nice 3000K warm white out of them, but with the 7-in-1 RGBAW + Lime + UV LEDs, you can also create absolutely any colour you need. There’s nothing you can throw at it that it can’t do!”

To provide the church with a powerful, flexible and intuitive control solution, Thomas introduced them to the ONYX platform from another of ADJ’s sister companies, Obsidian Control Systems. Alongside the ONYX PC software, he put in an NX Touch, which is a powerful yet simple control surface that features 14 touch faders and 20 velocity-controlled pads.

“Obsidian is my go-to for control,” stated Thomas. “I like to put the NX Touch in churches because it is so tough and I know that at some point a kid is going to mess with it. Real faders can easily get broken, but I think the NX Touch could get smacked with a hammer and it would still work fine!”

Following the installation and setup of the new system, the team at Essential Church were very happy with transformation to the lighting of their stage. Not only do the pastors and worship team on stage come across sharper and more naturally on camera, the backlight and colour washing enhance the atmosphere for those who attend the in-person services. Add to this an easy to use and powerful control solution, and the church is ready to take its services – both on and off line – to the next level.