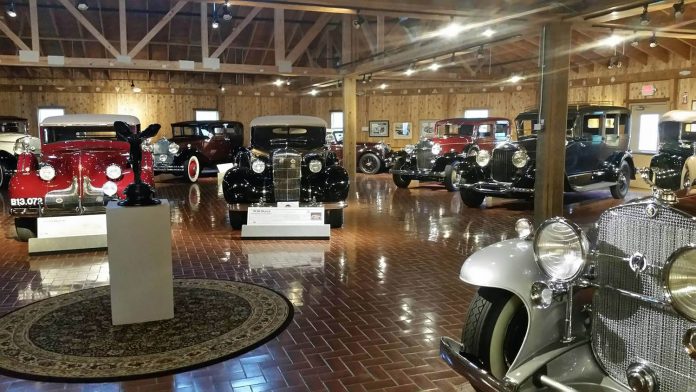 For automobile enthusiasts the Gilmore Car Museum is the place to go. Located on ninety acres in Hickory Corners, Michigan, the museum opened in 1966 with just 35 cars from the personal collection of founder Donald Gilmore. Partnerships with other classic car organisations helped to grow the collection to nearly 400 cars that are displayed in an ever-growing number of outbuildings.

Local A/V integration firm Crookston Audio installed a paging system a decade ago centred on an Ashly amplifier that is still going strong. However, so much expansion has happened since then that the museum called the company back to extend it. Crookston obliged with new Ashly amplification and DSP, using Dante to feed signal to the more remote outbuildings.

John Crookston, owner of Crookston Audio, explained: “The system we gave them ten years ago is still great, but several organisations had since added buildings that weren’t covered. In addition, budget constraints for the original system prevented us from delaying any of the output, so there was a noticeable ‘Grand Canyon’ effect whenever anyone made an announcement. With Ashly’s Pema Series and nXp Series combined processors and multi-channel amplifiers with Dante, we could address both problems at the same time.”

He continued, “We’ve been using Ashly for a long time. We like that they offer a complete set of solutions for any situation and that the Ashly Protea DSP software always operates exactly the same way, regardless of which specific product we’re using. We figure it out once, and then there’s zero learning curve. In addition, the Ashly DSP has all of the features we could possibly want to optimise sound for our clients.”

An existing Ashly PE-800 amplifier continues to drive the original paging system, but Crookston added a Shure SCM262 mixer ahead of it, along with a new Shure SLX wireless microphone system and a new Denon DN-300Z media player. A new Ashly Pema 4125.70 accepts output from the original system, and its four 125W networked amplifier channels power nearby outbuildings that had lacked coverage. The Pema’s built-in 8×8 Protea matrix processor allows to do complex digital signal processing on each channel.

Importantly, Crookston ordered the Pema with optional Dante output, which feeds a fibre line that had already been installed to a more remote outbuilding. There, a new Ashly nXp752 dual-channel 75W multi-mode amplifier with Protea DSP and optional Dante picks up the signal. Because the museum prioritized voice-over music, it decided to go with basic Atlas voice-range horns. Crookston used the Ashly Protea DSP to condition signals for maximum intelligibility and musicality and to delay each building relative to the “pedal car barn” to minimise the “Grand Canyon” effect.

“We’re new to Dante, and we only later realised that the museum had put each separate outbuilding on its own separate network,” John said. “However, they also had a second run to each building that wasn’t being used. We were able to establish a single network that is now dedicated to Dante and is ready to grow as the museum continues to grow. Once we had a network, it was a simple two-minute process to get all of the Ashly gear communicating via Dante,” he concluded.