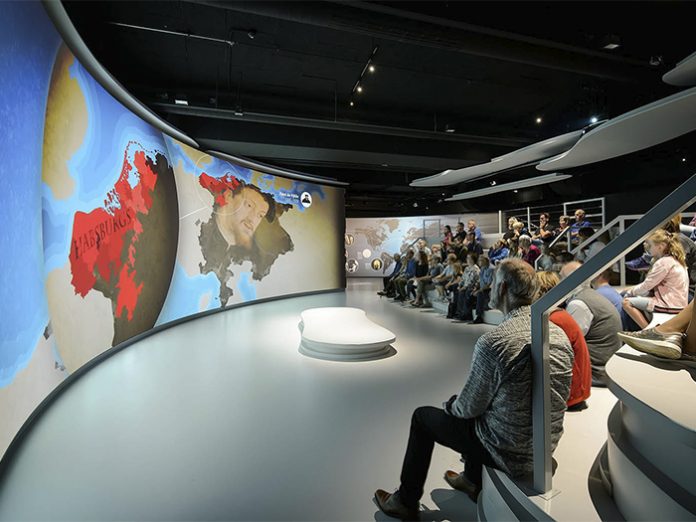 Dutch A/V design and integration firm Rapenburg Plaza worked with the Netherlands Open Air Museum to make the exhibition The Canon of the Netherlands successful, relying on 44 channels of Ashly Audio fully-networked and DSP-enabled amplification.

The Canon of the Netherlands is divided into several sections, and within each section, several displays transport visitors through space and time using innovative audio-visual technologies. An entry zone includes ten uniquely shaped screens, each with its own KEF Ventura 6 loudspeaker powered by its own channel of an Ashly nXp 1504 four-channel 150W multi-mode network amplifier with onboard DSP. In addition, four 100-volt Yamaha VXS10ST subwoofers add low-end support where needed and get their power and processing from an Ashly Pema 4250.10 four-channel 250W network amplifier with a built-in Protea matrix DSP.

“The Ashly nXp 1504s are all used in different zones but with the same KEF Ventura 4 & 6 loudspeakers,” Wilfred said. “They give us the flexibility of a low impedance setup and 150W per channel – ample power for this application. In installations such as this, there is no need for super high-power amplifiers. That is a benefit of the Ashly product line. In addition to the high-power amplifiers common to other manufacturers, Ashly also offers fully-featured low-power versions. Thus, the client is not paying for extra output that will never be used. The fact that the nXp 1504 is just 1 RU gives the large system a small footprint.”

He continued, “The most important network functionality is power on/standby, muting, and preset recalls. Although we often use Ashly DSP for intricate setups, we’re using the onboard DSP on the ten Ashly nXp 1504s and one Ashly Pema 4250.10 in a pretty straightforward manner: mostly equalizing for optimum speaker sound and power consumption.”