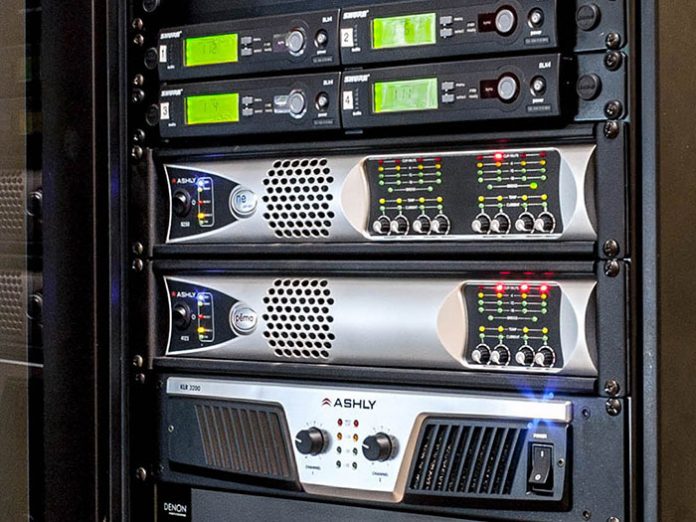 The Raleigh-Cary Jewish Community Center in Raleigh, North Carolina is set in a beautiful, thirty-acre campus that features the Steven N. Guld Family Center, an outdoor pool, fascinating walking trails, a stocked lake, an amphitheatre, a basketball court, and a playground. The centre is in the midst of a sizeable expansion, which started with a renovation of the family centre and an update of the pool facilities. Among the many improvements are new sound reinforcement systems both for the centre’s 100-seat multipurpose room and for the pool. Local A/V integration firm Avant Systems Integration designed and installed the new sound systems, relying on Ashly Audio DSP, amplification, and user control to power a 5.1 Danley surround system for the multipurpose room and a Danley OS-80 fully weatherised loudspeaker for the pool.

Scott Carneval, President of Avant explained further: “Designing the system for the multipurpose room was challenging because of all the various ways in which they hoped to use it. First, they wanted a solid 5.1 surround sound system for movie nights, but that potentially conflicted with its use for presentations and meetings, where a distributed system would normally be the solution. Fortunately we were able to call on Danley’s uniquely accurate phase coherence, which reduces feedback in the first place, and on Ashly’s effective feedback suppression software for anything the Danleys didn’t keep from popping up.”

The beauty of the design is that the ne8250.pe’s remaining six inputs accept the output from a Denon DN-500AV surround-sound preamplifier, which keeps the 5.1 signal in the 5.1 room, whereas any other input can be fed through to any other location in the facility. Moreover, presentations and other input types only get routed to the front two loudspeakers. A 137-inch Da-Lite motorised screen at the front of the room complements a Hitachi CP-WX8255A projector. A Denon Blu-ray player, Apple TV, and a computer input serve as sources to the video system. Although Scott and his team briefly considered using a generic A/V receiver for the 5.1 system, what was actually needed was Ashly’s power to drive the system with enough headroom. Moreover, Ashly’s sophisticated equalisation and dynamics processing really tuned the system properly.

An additional output from the Ashly Pema 4125 feeds an Ashly KLR-3200 two-channel 1600W amplifier, which in turn powers the weatherised Danley OS-80 that covers the pool (its other channel will eventually power a Danley subwoofer that was cut from the original system for want of budget). Everyone at the community centre originally wanted a distributed sound system for the pool, but the cost of wiring the whole thing made the Danley OS-80 the more cost-effective option, not to mention the fact that they have plans to replace the pool in the next several years. The OS-80 covers the entire area, and it covers it with way better sound quality than they would have gotten with a conventional distributed system. Danley’s mounting hardware made it easy to attach the OS-80 to the side of the nearest building.

Despite everything going on under the hood, the system is simple from the user’s perspective. Scott’s team’s original plan was to have a third party controller that would control the video and audio systems together, but they couldn’t swing it, budget wise, which is why Ashly’s free iPad (and now iPhone) app is such a game changer. As far as the audio is concerned, it’s better than any third party controller, and it allowed Scott’s team to stay within their budget while still making it easy for the staff to use. There’s a separate page for each room, with source select, volume, and mute. There is also nothing else for them to worry about or be confused by.

Already a hit, the new sound reinforcement systems at the Raleigh-Cary Jewish Community Center will undoubtedly inspire similar systems in the buildings and facilities that are slated for construction in the coming years.