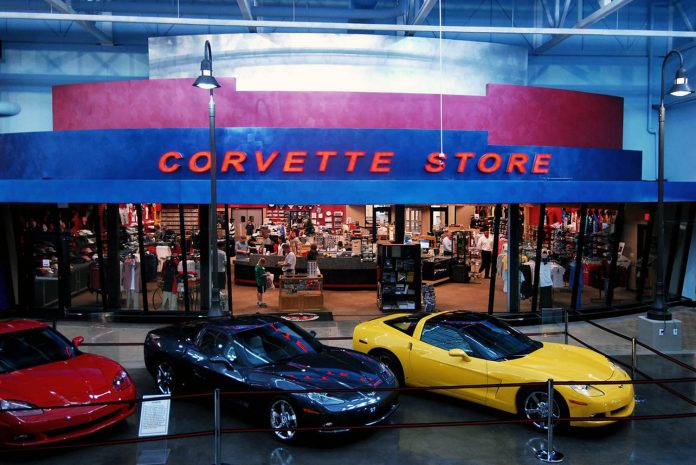 The National Corvette Museum opened in 1994, just a quarter mile from the famous sports car’s production facility in Bowling Green, Kentucky. It has numerous historical and technological exhibits, but the main draw is an ever-rotating collection of mint Corvettes that span the car’s sixty-plus years in production. A gift shop and café round out the experience. The museum also made headlines in 2014 when a sinkhole opened under one of its main showroom floors, swallowing eight cars, but no one was hurt and the damage has since been fixed.

He explained: “For years, the museum used the modest sound system that went in with the building for paging, mainly. The exhibits used TVs with DVDs on loop, which didn’t pack a lot of punch. We noticed that the National Corvette Museum had the feel of a natural history museum – it was quiet. For example, the museum has a ‘boardwalk’ where new Corvette owners can pick up their custom-ordered vehicles. It’s awesome looking – all these new Corvettes awaiting their new owners – but it was silent! We convinced them that they needed some exciting music, consistent with the brand.  And without the able assistance of Greg McDougald, Centerline’s project manager, this very complex system would not have happened.”

The newly-renovated system consists of over two hundred SoundTube in-ceiling loudspeakers in forty zones powered by five Ashly ne8250.pe 8-channel 250W network amplifiers. The Room-Centric Audio Design strategically locates the amps throughout the facility to minimize loudspeaker cable runs. The built-in Protea DSP does all of the loudspeaker processing. Dante connectivity links the Ashly amplifiers to a Symetrix SymNet Radius DSP matrix router. Users can adjust the zone volume and source material from ARC controllers, and the entire system is tied intelligently into the fire and paging systems.

“We love using Ashly amps and processors because they’re so reliable,” Oliver said. “If we have questions, it’s easy to get Ashly support on the phone. In the end, going with Ashly invariably makes our job much easier.”

As value added, Oliver volunteered his deep, sonorous “radio voice” for all of the voice-overs that now entice visitors to stop by the gift shop or to catch lunch in the Corvette café! So not only is Oliver behind the National Corvette Museum’s awesome new vibe, he has become the voice of the museum.