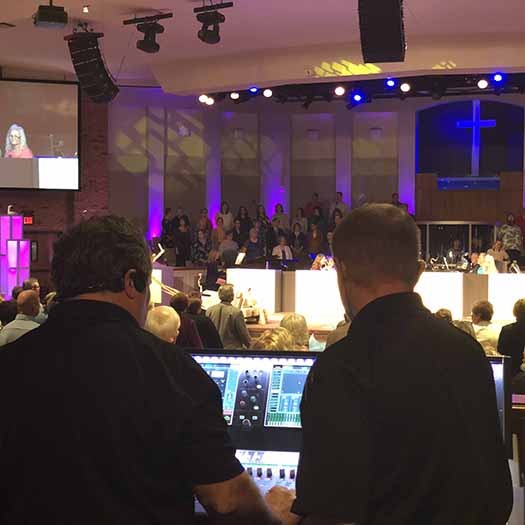 Nashville, Tennessee-based Morris Integration has expanded audio capabilities at the First Baptist Church of Arnold, Missouri using Allen & Heath’s dLive consoles. Making its debut in front of almost 2,700 people who attend weekly services at this house of worship just south of St. Louis, the systems upgrade is based around an Allen & Heath dLive S7000 control surface at front of house and a dLive S3000 used for monitors.

Services range from traditional to contemporary at the church, using an average of 80 inputs on any given Sunday. With an Allen & Heath dLive DM48 MixRack serving the house and a DM32 MixRack standing-in at monitor world, both MixRack processors utilise gigaACE networking cards to provide 96kHz audio and control transport via Ethernet over standard Cat 5e cabling.

“Not all that long ago, it would have been crazy to think you could transmit that much audio over Cat 5,” said Morris Integration design engineer Collin Adams. “But here we are today, and it’s a reality. Being able to draw upon the powers inherent in this kind of technology has allowed us to give the church the flexibility it desired along with sonic quality and performance transcending that of previous systems.”

Versatility was further enhanced with the addition of Waves Audio networking cards. Offering a full gamut of Waves plug-in processing, audio distribution, and digital mic splitting options, the cards provide a direct 96kHz interface to the Waves SoundGrid networking platform, placing a wide variety of effects right at the fingertips of system operators. An IP8 remote controller equipped with eight motorised faders and an IP6 remote controller with six rotary knobs are also available in the house and onstage, bringing an even greater depth of command with tactile control of bus masters, matrixes and other functions sometimes relegated to a console’s bottom layer.

“When you consider all of this,” Collin added. “Plus features like each dLive control surface’s ability to store scenes, have any input or mix assigned to any and every bank and/or layer, and place assignable SoftKeys plus pages of assignable rotaries in front of the operator, these systems can pretty much be configured in any fashion. The church came to us with a need to build something that would take them well into the future. I feel we’ve achieved that goal, and have given them a great return on their investment along the way.”