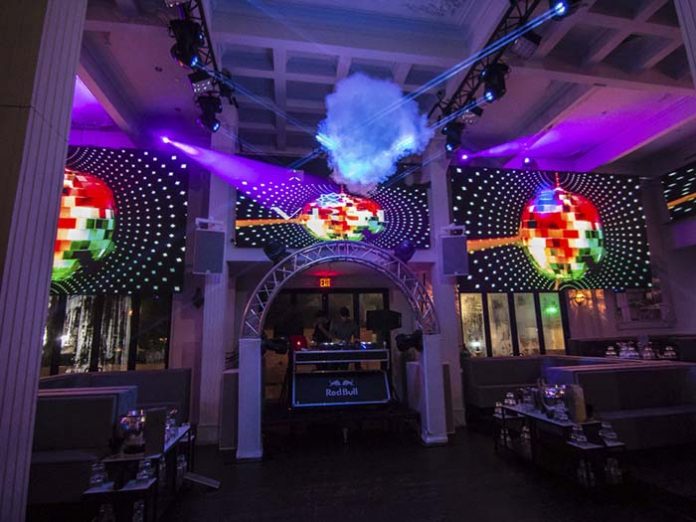 With the 51st Super Bowl set to take place in February at the NRG Stadium in Houston, TX, local venues are preparing for the big party that it is sure to bring to the city. In fact, the ability to show the game on huge screens was a key concern when the audiovisual system for new downtown nightclub VrSi was designed last year. Now the rig – which features no less than 172 ADJ AV6 LED video panels – is up and running. It is ready to show the big game live, but in the meantime is delighting the club’s guests with incredible eye candy.

Inspired by the lavish parties hosted by the French king Louis XIV at his palace in Versailles, Houston’s new night spot is an upscale venue that inspires to treat its patrons like royalty. The chateau-style interior features ornate ceilings, striking pillars and plush booths in which guests can enjoy premium drink offerings before heading to the central dancefloor to party the night away.

While the décor of VrSi takes is cues from the 17th century, its audiovisual system is cutting-edge. Looking for a setup that would not only make the venue stand out from the crowd, but also ensure VrSi is the number one choice for watching the 2017 Super Bowl on TV, the club’s owners brought in Mark Tristan of Tri Star Installations to design and install the audio, video and lighting systems. Established in 1987, Tri Star has a long history in the nightclub industry and had already worked with VrSi’s owners on other, smaller, projects.

“The owners were looking to do something different,” Mark told us, “an LED wall video-based system, which no one else has done in the Houston area. So, we looked at all the different panels that were available from various manufacturers, including the ADJ AV6 that had just come onto the market at the time. Its specification met what we were looking for and its price point is really good for a panel offering 6mm pitch, so we decided it was the best option for the project.”

A total of 172 AV6 panels were installed in VrSi – arranged across five separate sections – to create a totally immersive video experience. At the front of the venue, two large screens drop down from the ceiling, flanking the DJ booth. A further, smaller, screen then sits between them, above the DJ. The impressive installation is completed by two more, longer and thinner screens, which sit above the two bars at either side of the main space.

One of Mark’s concerns when undertaking the installation was to ensure that each of the separate screens were kept level. To achieve this, he decided to run a continuous length of Global Truss America square trussing right across the back of the venue. He then used ADJ’s AV6RB1 rigging bars to hang each of the three separate front screen sections from the truss, which meant that all three screens were perfectly level.

The effect created by this impressive deployment of LED panels is awe-inspiring. During club nights, animations and other graphical content powered by ArKaos MediaMaster is displayed across the whole system, which completely envelops the crowd on the dancefloor with eye-popping visuals. The management then also has the option to display sports broadcasts on the screens, either multiplying the same game across all five sections or splitting them up to show different matches at the same time.

To further enhance this remarkable video system, the Tri Star Installations team also specified and installed a collection of carefully selected lighting fixtures. Hung from the ceiling, at either side of the dancefloor, are two trusses each of which carry three ADJ Vizi Beam 5RX moving head fixtures. These were selected due to their potent Philips® Platinum 5R discharge lamps and impressive optics, which allow them to create powerful beams of light that cut through the atmosphere in the club injecting it with colour and movement.

In-between the Vizi Beam 5RXs on the central trusses are ADJ Freq Matrix Quad RGBW LED strobe fixtures. These distinctive units provide intense strobing effects, as well as coloured chasing patterns, to compliment the moving beams and LED screen visuals. The lightshow is then completed by four of Elation Professional’s impressive Sniper 2R laser-like beam projectors. The Snipers are mounted above the main screens, two on each side, angled towards the dancefloor to create stunning mid-air effects.

While the lighting system certainly adds to the look of the venue, the video screens are without doubt the stars of the show at VrSi. Mark deliberately designed and programmed the lightshow to accent the video system, but not to overpower it, allowing the visuals and animations displayed on the wrap-around video wall to take centre-stage.

Now that the system has been installed for almost a year, both Mark and the owners of VrSi are pleased with their decision to install AV6 panels, citing their modular design as a real advantage when it comes to servicing. “When we’ve come to service the panels,” Mark explained, “it made it easy the way that you can pull out a single module, even if it’s right in the middle of the whole system, so it’s been pretty easy to work with.”

Having already become a popular nightspot for Houston’s party crowd, thanks to its lavish décor and hi-tech video and lighting system, VrSi is now ready for the Super Bowl to come to town next year. With the biggest installation of LED video panels we’ve seen in a venue of this size, it’s sure to be the best place in Houston to catch all the action for anyone who doesn’t manage to bag a ticket for the stadium!