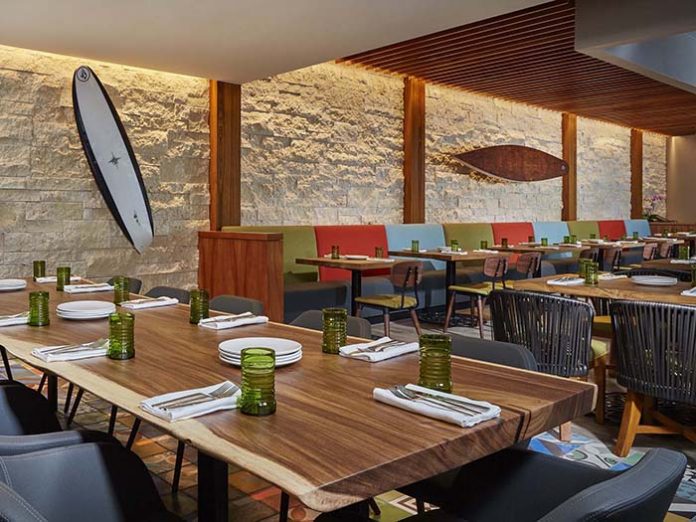 For over a quarter century, T S Restaurants’ family of Hawaiian-themed eateries, Duke’s, has been pleasing Southern California diners with quality Pacific cuisine. And now the sound at the La Jolla and Malibu locations matches the acclaimed level of edibles; both of those restaurants recently had their house sound upgraded with systems from Bose Professional.

Background music in both locations now emanates clearly from Bose FreeSpace DS 100F and DS 40F flush-mount, and DS 100SE and DS 40SE surface-mount speakers, while diners who want to dance at the Malibu restaurant’s Barefoot Bar can do so to live music played through a Bose L1 Compact portable line array system. Both locations also use Bose ControlSpace CC-64 and CC-16 wall-mounted controllers, and the sound systems are managed through Bose ControlSpace ESP-00 Series II engineered sound processors. The systems were installed over the course of the last year by San Diego-based AV systems integrator 5 North Media, Inc.

“We are passionate about quality in all aspects of our restaurants,” commented Susie Saxten, Chairman of the Board of T S Restaurants and Director of Legacy of Aloha, the company’s highly regarded charitable program. Susie describes the previous sound system in the Malibu location as “dated” and in need of upgrading. She says 5 North Media recommended the Bose components, and she also recognized the Bose brand as one that is commensurate with T S Restaurants’ own image of quality. “The Bose name speaks for itself,” she remarked.

5 North Media President Bob Bobuk agrees with that assessment, adding that Bose Professional offers a wide range of product solutions for a variety of applications. For instance, he says, the Bose DS 40 series loudspeakers were perfect for the dining areas, providing clear, articulate sound with the kind of musical presence that didn’t require high volumes. On the other hand, the DS 100 series speakers were the best for the bar areas, able to reproduce excellent bass with a frequency response down to 60 Hz. “The DS 100 has full-range sound from a small, unobtrusive enclosure, so they’re especially good for restaurants and other spaces where the aesthetic is very important,” Bob explained. “Bose matches the quality of the setting. It’s a solution we use often for hospitality projects.”

Mark Herron, 5 North Media’s Director of Engineering, says the FreeSpace DS 100 speakers were also the best choice for the La Jolla location’s banquet space. “They fill the room but without having to crank up the volume,” he explained. “That’s a huge reason why Bose is such a good choice for high-end environments.” And Herron says that the Bose CC-16 and CC-64 controllers, placed in the bar, dining and banquet areas, allow the venues’ management the ability to set each space’s volumes at exactly the levels they need at the moment. “The Bose system has all the tools we need to make sure a great restaurant like this sounds as good as it looks,” said Bob.