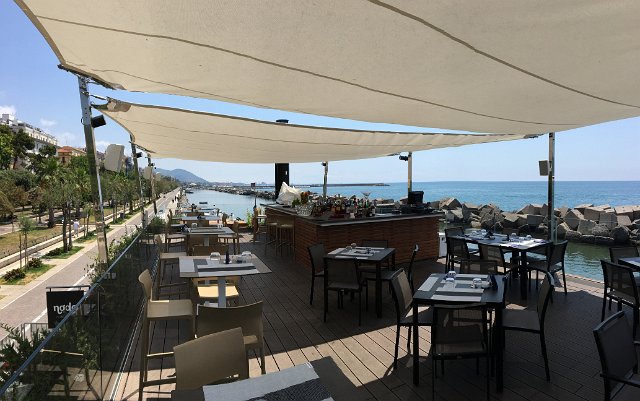 After several years in a poor state of repair, the Embarcadero waterfront bar/restaurant in the Italian city of Salerno has undergone a major refurbishment to mark its 50th year. A comprehensive Yamaha Commercial Installation Solutions (CIS) zoned audio system has been added, which delivers high quality sound while being very easy to control.

Established in 1967, Embarcadero traditionally attracted wealthy clientele because its moorings attract tenders from yachts passing through the Gulf of Salerno. This year its present owners, Mr Generoso Galderisi and Mr Ettore Merola, have returned it to its former glory.

Generoso wanted to add a cutting-edge audio system and considered various options. He spoke to Mariano and Valerio Fabio of Salerno-based installers Casa Musicale Cav. Quinto Fabio then suggested a Yamaha CIS system to be the best solution. Wouter Verkuijl of Yamaha Music Italy demonstrated to Generoso, his architect and technical consultants that the CIS solution was not only the best sounding and looking but that it would also satisfy all the venue’s needs.

Embarcadero has a number of indoor and outdoor areas, which could prove difficult for designers using less comprehensive product ranges or mixed-brand systems. However Yamaha’s solutions meant a complex but easily-controlled, nine zone system could be installed, with 36 loudspeakers delivering high quality audio to every area. The indoor zones are in the restaurant (VXS3F and HS8S loudspeakers), restaurant kitchen (NS-IC800), bar/takeaway counter (VXS5, VXS10S, NS-IC800, NS-IC400) and the information point (NS-IC800). The outside zones comprise the bar terrace (IP35-rated VXS8), upstairs terrace (IP35-rated VXS5 and VXS10S), the Champagneria (VXS8) and a separate zone for when live performances and DJ sets are taking place on the upstairs terrace (DSR112 and DXS18).

The system is managed by a Yamaha MRX7-D matrix processor and is controlled wirelessly using Yamaha’s versatile Wireless DCP and MusicCast Controller apps, as well as by DCP4V4S and DCP1V4S surface-mounted panels. Two Yamaha WXC-50 Network Stereo Pre-Amplifiers are also installed, one for the bar and zones 2-4, the other for the restaurant and zones 5-9 with separate volume controls. Both ‘sides’ use their WX-C50 independently for music from internet radio, Spotify and USB flash drives. “The restaurant needed high quality audio at low SPLs but it was important that the speakers were almost invisible. This meant the VXS3F was perfect,” says Mariano Fabio. “An HS8S subwoofer is hidden behind a lattice above the entrance and its sound blends in very well with the VXS3F. Together they deliver a luxurious, deep sound for customers.”

Because the Champagneria is 50 metres from the MRX7-D matrix processor, its VXS8 loudspeakers are driven by an XMV8280-D, Dante-enabled power amplifier connected to the MRX7-D by CAT6 cable. “The full-range VXS8s do a great job of creating a relaxed, open air lounge sound, aided by the very musical EQ of the matrix processor,” adds Mariano.

For live performances and DJ sets on the upstairs terrace, Tony specified a pair of DSR112 full range loudspeakers with two DXS18 subs configured in cardioid mode. This ensures that the lowest frequencies are pushed out to sea, not towards the buildings on the landward side of the venue. “The resident sound engineer told me he had never measured such high SPLs from this type of system. For him it was unbelievable that the music had such a clear sound at high levels. The DSR range still surprises people, even after seven years on the market” says Tony.

Despite its complexity, the Yamaha system delivers great sound while being extremely simple to control by the Embarcadero staff. In addition multiple zones can be combined into one, when required, at the touch of a button.

“The owners and staff of Embarcadero are both very happy with the system,” says Mariano. “Generoso is now working on other important developments in the province and he will now call us first for his audio needs.”