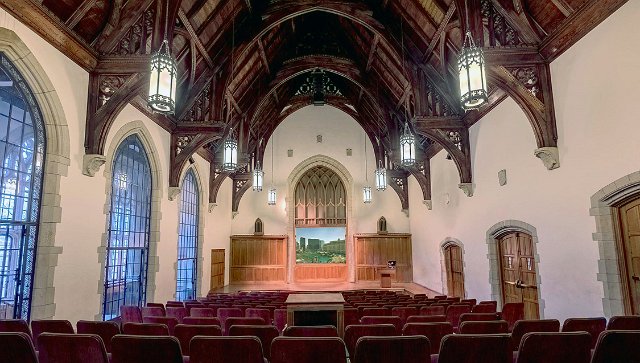 America’s third-oldest college, Yale University is perhaps as noted for its Gothic-flavored architecture as for its history and academic achievements. So, when updating the AV systems in several of Yale’s existing spaces, as well as one of its newest ones, systems integrator North American Theatrix (NAT) turned to L-Acoustics knowing that its products would deliver superior audio fidelity while discreetly blending into each rooms’ décor.

“We’re a preferred vendor for Yale and have worked on their AV systems in the past, so when they asked us to find the best sound solution we could for these spaces, we naturally went with L-Acoustics,” said Pat Nelson, Chief Operating Officer of NAT, which is also an L-Acoustics Certified Provider for Install (CPi). “Theater and auditorium spaces are one of our specialties, so product lines like Kiva and XT were sonically and visually ideal for Yale’s orchestra rehearsal room and a recital hall. But we were also dealing with a wider range of environments that included a lecture hall and a dining room, and we were pleased to find that those same systems were very well suited for addressing the school’s needs in those disparate spaces as well.”

Using L-Acoustics’ Soundvision 3D real-time acoustical modeling software to determine the optimal designs, stereo Kiva arrays and SB15m subs were specified for the Orchestra Rehearsal Room in the School of Music’s newly opened Adams Center, whose $57.1 million cost was largely borne by the school’s alumni, is a stunning, three-story soundstage-like space, and will be the first home that the Yale Philharmonia and Yale Symphony Orchestra have had on campus.

“They plan to have guest conductors work with the orchestra there via videoconferencing, so the sound needed to be impeccable,” said Pat. “The Kivas are perfect for that. We applied acoustical treatment to many of the room’s surfaces and also installed motorized reversible acoustical panels, so the room is even more flexible. The Kivas and the subs make it sound amazing.”

Kiva and SB15m also recently went into William L Harkness Hall’s Sudler Recital Hall, which hosts classical and other types of musical performances as well as speech reinforcement and video presentations as part of its mission as a performance space and a classroom. “We were able to fly the Kivas in this room about 60 feet up in he rafters,” said Pat. “You can’t see them from below, but their coverage of the room is incredible.”

Sterling Law Building’s Room 127, which is Yale Law School’s largest classroom and named for its address in New Haven, is classic Yale architecture built in 1931 and follows the designs of English Inns of Court. For the range of lectures and other teaching applications there, NAT once again turned to Kiva, plus some ultra-compact 5XT coaxial systems. “This was another case of having to integrate the speakers into classic interior aesthetic designs,” said Pat. “The compact size of all of the L-Acoustics speakers made that task much simpler and effective.”

Six 5XTs powered by an LA4X installed at Greenberg Conference Center Dining Hall further underscore the benefits of L-Acoustics’ solutions. Each system that NAT designed is powered and processed by a single amplified controller, not only minimizing rack space requirements but also simplifying and speeding up installation for a cost benefit to both the contractor and client. Furthermore, Pat points out that NAT chose L-Acoustics because its products represented “high-quality, long-term solutions. We are confident that these systems will provide Yale with many years of reliable service.”

Pat additionally commented that the loudspeakers and amplifiers were a key component of a larger AV integration project that also included QSC’s Q-Sys networking system and Shure ULX-D microphones. “The goal was to make these fully digital sound systems from microphone to amplifier to speaker,” Pat explained. “L-Acoustics delivers a pristine sound that let us reach that goal here; their products are always a smart choice.”