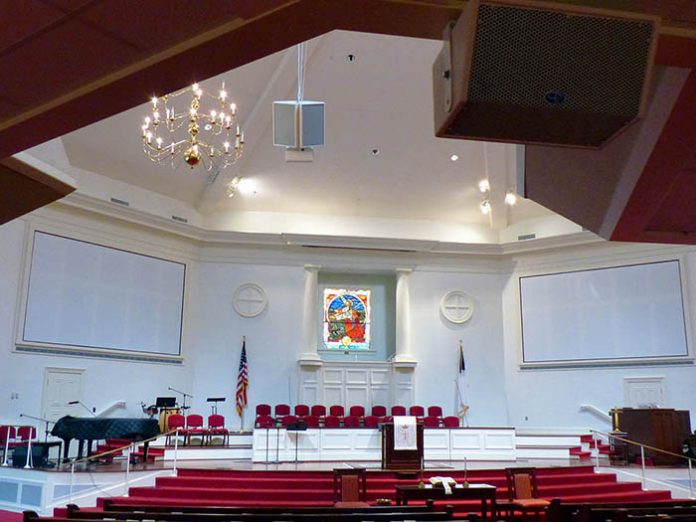 Ashland, Virginia Baptist Church was organised by fifteen members on August 20, 1858. That first meeting was held in the Union Meeting House, currently the Masonic Hall on England Street, and served as the worship centre until the dedication of the new church on Railroad Avenue. That “new” church building also served as a hospital during the Civil War.

In 1967, the congregation moved to its present location. Since that time, several wings were added including a new sanctuary and fellowship hall to accommodate their growing congregation. When church leaders determined that a new sound reinforcement system was needed to improve intelligibility and musical impact, they also knew that it could not come at the expense of First Baptist’s sanctuary aesthetics. Audio/video integration firm RTW Media designed and installed a Danley Sound Labs system that satisfied both the sonic and visual objectives by minimising the number of speakers that were required to provide precise, intelligible coverage.

“First Baptist of Ashland is revitalising it’s sound and image to appeal not just to older, established church members, but also to the younger and more diverse generation,” explained Walsh Hinnant, account manager at RTW Media. “The church leaders are working with Arrabon to broaden First Baptist’s appeal and to diversify its congregation, and David Bailey, Arrabon President recommended that they speak with us about a new sound reinforcement system.”

Walsh continued, “Their old system had ten loudspeakers just for the mains. It didn’t look good and it sounded worse than it looked. Danley became the obvious choice as their loudspeakers are incredibly efficient, allowing us to get the job done with significantly fewer boxes. Moreover, Danley is a Christian company, like RTW Media, and we both know that churches spend years and sometimes decades saving money so they can reinvest in technology for their worship experience”

The new Danley system uses two Danley SH-69s on each side of the stage (four total) in a true stereo configuration. A pair of Danley TH-212 subwoofers round out the bottom end, and four Danley SH-Micros provide under-balcony fill. The new system has a much smaller visual footprint but vastly greater output and fidelity. Three 4-channel Danley DNA 10k4 Pro amplifiers with onboard DSP power the mains: two for the SH-69s and one for the TH-212 subwoofers. A single 4-channel Danley DNA 5k4c powers the SH-Micros. “Our field guys love the new Danley DNA amplifiers because they have presets for every single Danley box,” said Walsh.

Mack McKinney, RTW field manager, who has installed hundreds of audio systems throughout the Mid-Atlantic, said, “There is no other loudspeaker and amplifier combination that sounds as crisp, yet warm out of the box as the SH-69 and its complimenting DNA series amplifier. Clients are in awe when we fire up the pair and play a track directly into the amps. It’s my favourite moment on every job.” A DiGiCo S21 console serves as a user interface for the church techs.

Walsh added, “The way we were able to fill that huge space – fifty-foot ceilings and massive, multi-level balconies – with just a handful of unobtrusive boxes was simply awesome. We were able to completely eliminate two of the pre-existing speaker fly points. And it’s highly intelligible. You can understand every word that’s spoken and really feel the depth of the music. We have a criterion that we use to calibrate our work here at RTW Media: we ensure that someone attending service for the first time in a decade, and sitting in the last seat of the last row, hears the message as if they are standing in the centre of the front pew. At First Baptist of Ashland, Virginia, Danley Sounds Labs helped RTW make that happen.”