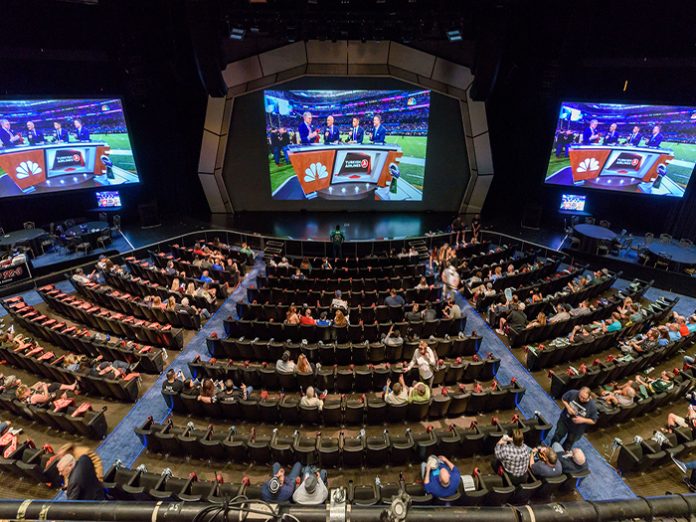 GRAMMY Award-winning recording artist and performer Barry Manilow began an extended residency at the International Theater at the Westgate Las Vegas Resort & Casino on May 24, featuring favourites from his deep songbook of hits. The International Theater is one of Las Vegas’ classic venues — the 1,600-seat theatre is where Elvis Presley performed 837 consecutive sold-out shows — and it now has state-of-the-art sound in the form of a RoomMatch system from Bose Professional.

“I’m so glad they haven’t touched the showroom,” the singer told the Las Vegas Sun. “If you put long tables in that room instead of the theatre seating, it would take you back to the days of Sinatra and Dean Martin. Showrooms just don’t look like that anymore, and they even kept the name. Barbra [Streisand] opened it followed by Elvis, and everyone from Aretha Franklin to Michael Bublé has played that stage. Even when I walk out for soundcheck, it really does feel like a very special place.”

Ken Newman, Manilow’s longtime front-of-house engineer, says he had some hesitancy about using the new sound system ahead of the first shows, having never worked with a RoomMatch system before.

“I went there and put the system through the same evaluation process I always do, including analyzing pink noise through the system and then playing eight sets of stem files through the house console from previous recordings I’ve done of Barry in other venues,” he explained. “I came away rather impressed!” Newman said Manilow shows are surprisingly loud, averaging in the mid to upper 90-dB range and sometimes peaking above 100 dB, thanks largely to his enthusiastic audiences who know every word of every song.

“It’s a challenge keeping Barry’s vocal above the audience, so they can still hear him even while they’re singing along,” he said. “But the RoomMatch system has the headroom I need for that. The system is well-suited for this type of environment, the classic Las Vegas showroom.”

The system consists of 16 RoomMatch modules configured eight per side in a left-right hang, with eight ShowMatch SMS118 subs stacked under the stage, four RoomMatch RMS218 subs and eight RMS215 subs flown above the stage, nine RoomMatch Utility RMU208 loudspeakers for under-balcony fills, and a dozen RMU105 loudspeakers used for front fills. A VIP seating area has its own RoomMatch L-R system. The entire system is powered by 28 PowerMatch PM8500N amplifiers and managed using fully Dante-compatible Bose Professional ControlSpace DSP.

Joe Dougherty, Head of Audio for the International Theater, is deeply aware of the venue’s legacy, and of how the RoomMatch system will help keep it alive. Citing the range of artists with upcoming shows in between the engagement’s nights, such as the Alan Parsons Project’s Eye in the Sky 35th Anniversary Tour, a show by legendary prog-rockers Yes in August, and an extended engagement by veteran entertainers Clint Holmes and Earl Turner called Soundtrack: Your Songs. Our Stories, he says RoomMatch will handle all of them well.

“It’s a great system for this room and for what the theatre needs to accommodate,” said Dougherty, adding that the venue is also used for corporate events and overflow from the hotel’s Sportsbook for events such as NCAA Tournaments and the Super Bowl. “The theatre has its own needs for low frequencies and for articulation, and then each artist has their own requirements, and the RoomMatch so far has met them all. The system has a lot of flexibility built in through the DSP, such as allowing us to adjust the delays for the fills based on what each show demands and letting us manage a lot of zones. But most of all, it sounds very, very good, no matter what we put through it. That’s always the bottom line.”