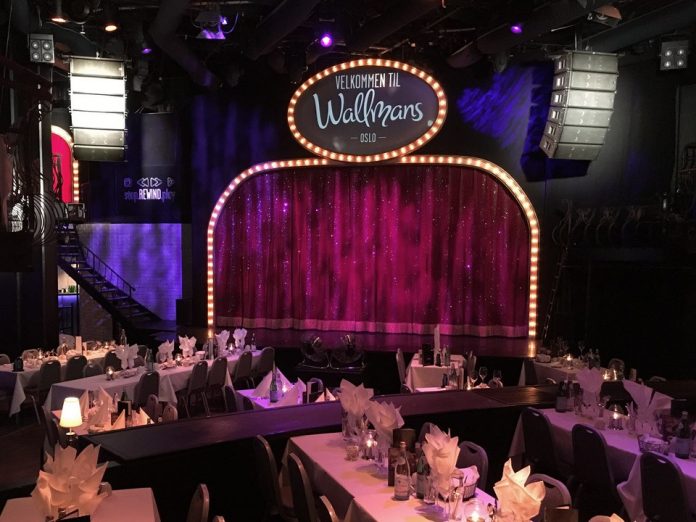 “Many customers attempt to influence installs with their knowledge of home audio, but Raymond is a highly regarded FOH technician with more than 4000 shows at Wallmans, 2entertain and other venues throughout Norway,” explained Avon’s Lead System Designer and co-founder, Edgar Andraa Lien. “Raymond is a true pro audio guy who knows exactly what needs to be changed, added or adjusted, without being distracted by details that simply burn time and energy.”

The goals for the Wallmans audio update were fairly straightforward: deliver concert-grade sound quality that would appeal to the growing roster or discerning talent and guests, offer exceptional fidelity with ample headroom and low frequency extension to address a broad mix of music styles, and be up and running in time for the unveiling by May 2018.

Line arrays, subs and support speakers are all powered by a total of five VUE Audiotechnik VUEDrive V6-d Series Systems Engines. Both Dante and analogue signals are fed to the VUEDrive units from a Soundcraft Vi-3000 console at FOH. All 30 V6 output channels are in use, with full user control available form the front panel of the rackmount VUEDrive units, or remotely via iPad or Mac.

“The VUE speakers offer so much detail that my mix really comes to life,” remarked FOH Technician, Sigmund “Sigge” Rønning. “The al-8 is virtually invisible to my ears. It has a wide-open voice that allows me to place the source of the sound right where I want it in the mix. I’m free to create an experience where sound is coming from something on stage, rather than from a loudspeaker hanging above or to the side of the stage. I have never experienced anything like this before.”

Technical Manager Raymond “Ray” Hem concluded: “With great help from Avon, we now have a speaker system that covers all 600 seats equally. The transition between top and sub is just amazing. I wanted a system with better definition in the low end than before, and I must say that VUE delivers way beyond my expectations.”