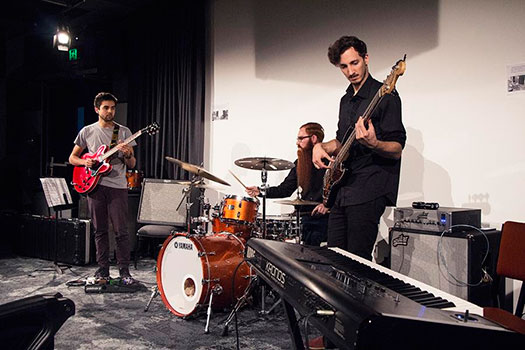 With state-of-the-art performance and teaching facilities, the Western Australian Academy of Performing Arts (WAAPA) is one of the most successful and renowned arts training institutions worldwide. Based at the Mount Lawley Campus of Edith Cowan University, WAAPA is home to a variety of performance studios and theatre spaces including the newly refurbished Music Box Theatre – a space which received a new VUE Audiotechnik PA system designed by Amber Technology and installed by Sinclair Communications. The PA system includes al-4 Subcompact Line Arrays, al-4SB Flying Subwoofer Systems and V4i System Engines.

Formerly serving as a lecture hall, the space that is now home to the Music Box Theatre is now being used for contemporary jazz and modern rock performances by students as well as guest artists. The limitations of the existing space – caused in part by its close proximity to adjacent lecture spaces – and the need for high-quality sound reproduction presented several challenges in the design of the PA system. Due to a steep rake in the seating area and the addition of a false ceiling, space to fly a PA system had restrictions. The position of the arrays and the anchors for the frames had to be determined and installed prior to the room’s upgrade. In addition, special consideration had to be given to a large projector screen on the back wall as well as lighting bars that were already in place.

“We had a PA demo between the contending manufacturers, and while each system we listened to had it merits, we were really impressed with the definition and clarity of sound that the VUE system produced,” said Tim Landauer, venue services officer, WAAPA. “The system gave us great low-mid balance and coverage control, plus the low profile looks great in the room.”

To determine the optimal placement of the arrays to overcome the physical challenges of the space, Ironside and his team employed EASE Focus 3D Acoustic Modeling software to determine optimal coverage and the best hang points for the arrays. “Using the VUE al-4s, the system easily overcame the issue of varied sound distribution,” Ironside reveals. “Concerns regarding transmission of noise to the lecture theatre directly above the venue were alleviated by carefully focusing the arrays mounted in the frames and the chains used to install them to mitigate the transmission effects.” Installation was performed by Sinclair Communications and supervised by its owner, Cliff Blackburn. To increase isolation and further control acoustic reflections, the room was then heavily treated with acoustic panels.

Four al-4 Subcompact Line Array Systems and one al-4SB Flying Subwoofer System were flown per side above the front edge of the performance area. The al-4SB’s integrated rigging hardware allows the al-4s to be suspended directly below the al-4SB cabinet, enabling the complete system to provide thorough and consistent coverage throughout the room while providing low-frequency reproduction down to 45 Hz. Amplification with built in dsp and networking is supplied by two VUE V4i Installation System Engines, each capable of generating two channels at 1600W for the low frequencies plus two channels at 550W for the high-frequency components.

“Performances using the new VUE system have been regular,” Ironside continued. “The venue is booked out most days with concerts and ensemble rehearsals.” According to the staff at WAAPA, the VUE system has performed flawlessly under this rigorous schedule. “The seamless coverage in the room is fantastic,” observed Landauer, Laurie Sinagra, lecturer, Production and Design and Arts Management, WAAPA concurs, “I’ve never heard a more clear and natural sounding system.”