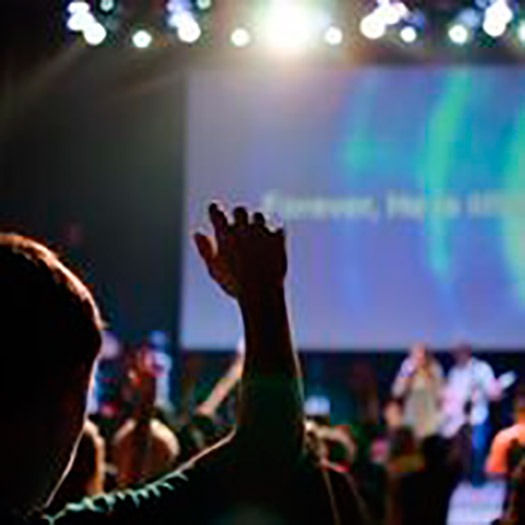 When Crossroads.TV Church moved to a new facility-the former home of a multiplex movie theatre in Lancaster, OH, it was clear the expanding congregation would benefit from a new sound system. Having already worked with the church on the audio install at their Lithopolis, OH, campus, Crossroads.TV entrusted Dave Lowery and Matt Price from Sound Inspiration LLC to design and deploy the new PA featuring VUE Audiotechnik’s al-4 Subcompact Line Array System.

The PA system requirements at Crossroads.TV Church are unlike those of a traditional house-of-worship audio install. Crossroads.TV’s progressive weekend experiences feature loud, edgy music intended to attract and speak to younger generations. The new VUE system is able to accommodate those needs while maintaining clear sight lines from all areas of the room.

“We were on a rather tight budget,” explained Joe Miller, Executive Pastor of Campus and Creative at Crossroads.TV Church. “Our solution required the best possible audio quality, as well as the best possible coverage, at a price point we could manage. We heard many systems in the price range, however, when we heard the VUE demo at BoMA in Downtown Columbus, OH, we were excited by the clarity and power that this minute rig generated, because sight lines were also a concern for our room. There was no other PA that had the clarity and performance of the VUE system.”

Crossroads.TV Church’s Lancaster campus opened in September 2012 at the Fox Family YMCA with less than 100 members. But with attendance growing to nearly 400 congregants weekly, the church outgrew the space and needed a new home to prepare for further growth. Three theatres in the cineplex were renovated and combined into one 600-person capacity theatre by tearing down two walls.

The VUE system design allows the entire theatre to experience the music as well as the message through two main hangs, each with eight VUE al-4 Subcompact Line Array Systems, plus four as-215 Dual 15-inch Vented Subwoofers arrayed in a cardioid pattern on the ground. Each al-4 features dual Kevlar-cone woofers with neodymium magnets, plus a 1-inch compression driver with VUE’s proprietary Truextent beryllium diaphragm. Truextent beryllium diaphragm technology delivers dramatic improvements in the high-frequency range and provides response linearity far beyond that of traditional aluminum or titanium diaphragms. The al-4’s compact profile (10.2, 18.9, 5.4 inches) avoids line-of-sight issues for the congregation while producing average SPLs of 113 dB. The as-215’s produce a usable LF response down to 38 Hz and are capable of 128dB SPL long-term continuous. A small center fill of two VUE a-8 Compact Full Range Systems was added on the stage lip to provide direct coverage for the first few rows.

Crossroads.TV’s VUE PA has been a resounding success, appreciated not only by the technical personnel but also the pastors. “The clarity in the sound system is incredible,” said Lead Pastor Tim Moore. Rick Jones, Campus Pastor, concurs, “It is unreal how loud and full this system is without losing any clarity.”

FOH Engineer/Production Assistant, Maria Leonard agreed. “I’m overwhelmingly pleased with the evenness and clarity in the VUE system,” she said. “More importantly the responsiveness, when I make a change at the board – whether in gain or EQ – I can immediately hear the system respond to the changes I’ve made.”

The VUE system consistently delivers on its promise, added Joe. “When we research and undertake projects like this, we have very detailed conversations and expectations regarding our investment. Due to the fact that our money comes from church members, we want to make sure we are the best stewards possible of the finances we receive, so going in we know what we want and work the solution as such. The VUE system has not only met but exceeded our expectations.”

Located in the River Valley Mall in Lancaster, OH, Crossroads.TV Church is a progressive-style church with a mission to help people get on the path to God. The renovated 600-seat venue is also available for rental to host outside events.