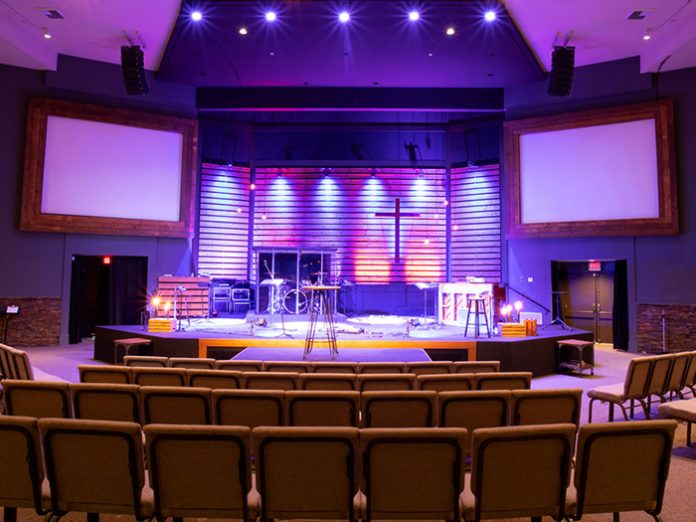 Co-lead pastor Justin Hoeppner had been planning an audio system upgrade for New Community Church in Vista CA., for almost 2 years. The church seats about 600 with the aid of a huge balcony that extends out over half of the lower level. This always presented an audio challenge. With a weekly attendance of 400, New Community wanted to reach every person in attendance with clear audio. Justin described the old audio system: “Our old system was tired, rundown and cranky. It had virtually no high frequency response which gave us a muddy mid-range”. New Community decided it was time for an upgrade.

Expecting to make a healthy investment into a new system, they researched choices for about a year by visiting other churches and demoing various manufacturers. Of course, they demoed big name systems in large churches. But they knew the goal wasn’t to overpower their congregation, Instead, they wanted to provide clarity and inspiration, especially to those in the balcony where the old system failed to perform.

Their research paid off as they discovered the VUE reputation. After connecting with VUE partners, Essex Sound, and designing a system to cater to their building’s needs, the al-4 line array was installed. To accommodate the unique shape of the auditorium, 120 degree wide dispersion horns were used to ensure proper coverage. Two al-4 arrays (8 elements per side) were suspended and wired in stereo by request. Two as-215 subwoofers fill out the low-end. VUEpoint Beam Forming allowed the system to be aimed to cover the balcony and lower seating area, while attenuating hot spots.

After the first service Justin commented: “With our old system, we could always see a difference between the audience on the floor and the audience in the balcony. The difference in sound made the balcony attendees much less engaged with the music. Now with our improvements, we’re seeing a more uniform engagement throughout the auditorium…. We have plenty of volume, but it’s not overwhelming everyone with massive SPL. The presence is incredibly different which makes our people feel more immersed and connected to the service…. We’re thrilled with the results, and we couldn’t be happier with our selection.”