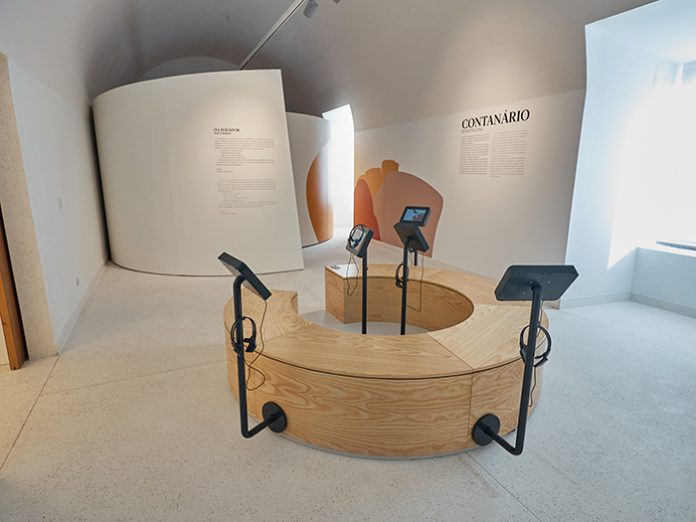 Closed to the public since 2004, the Archeology and Ethnography Museum of Elvas (Museu de Arqueologia e Etnografia de Elvas) is the largest museum of its type in Portugal’s Alentejo region. For its reopening, the administrators found a new location – a fully restored military maintenance building – and created a new exhibition that combined the collection of the António Tomás Pires Museum with the collection of the Farmers’ Guild of Elvas.

“For this project, we were asked to base the proposal on three fundamental pillars: history, time and people,” said Pedro Pereira from byAR, which oversaw the entire project. “From here was had to develop an exhibition where archaeology and ethnography could go hand in hand, adding a digital and interactive layer to the journey that would not only help to understand history and convey an educational and cultural message, but also update a museum created in the early 19th century.”

The project, totally conceived by byAR, was to build an exhibition route where the physical and the digital can interact, without overlapping.

The Augmented Book Experience – the first room in the exhibition – is a space that pays tribute to the collections and people who made the museum possible. At the back of the room there is a giant book, 140cm x 100cm, which invites visitors to browse and, in doing so, experience animated content that complements the pre-existing information. Each page has unique content and this information is recognised through video mapping and computer vision, allowing visitors to learn more about the people and institutions that made the museum possible.

“We used VIOSO’s Anyblend for the augmented book, because it is so interactive, rather than just being straight video playback,” said Pereira. “We developed our own software and used the Anyblend to distort the image projected on the book, to compensate for the distortion of image projected into an open book with an angle of 15 degrees.

The Augmented Book experience was a challenging installation due of several reasons: the projector was installed with a first reflection mirror; the book was 15º tilted; the size of the pages also created a curved distortion; the weight of the pages forced the pages to create a vertical distortion. With the VIOSO remote support it was possible to overcome all these challenges is possible to see.”

In the next area, which is dedicated to the Holy Trinity of Mediterranean gastronomy (bread, wine, and olive oil), a pair of large interactive tables were used to represent the centre of the family home.

“By touching certain points on the table, visitors will be able to access animated and illustrative content, which will give them a better understanding of the people of Elvas: how the utensils were used to prepare certain dishes, from the stone age to the present day; how the bread, wine, and olive oil triad has always been part of our diet; or the timetables and favourite dishes of the ‘Ganhões’ – the name given to the region’s land workers.”
Next up is the Interactive Wall, which was added to represent all of those who have contributed in some way to the museum itself.

“We developed an app that is projected on one of the walls at the entrance to the main exhibition,” explained Pereira. “This app is based on the drawing of the territory of Elvas, over which an interactive video mapping is projected. This was developed to help visitors to discover people and institutions that contributed to the archaeology of Elvas and contributed to the discovery of most of the objects exhibited in the rooms.”

A later room, called the Contanário, used a Sony projection system with VIOSO Player to help augment the stories played on an audio system, while several tablets were also arranged for listening to stories and consulting information.

The team from byAR chose VIOSO Player to allow them to warp the images that were to be projected the exhibition’s curved walls, which – according to Pereira – was perfect as they needed a video player that could warp the content without compromising image quality.
The final ‘Sandbox’, area invites visitors to explore their more archaeological side. Instead of sand, byAR filled the box with semolina wheat (a cereal typically grown in the region), which allows visitors to ‘excavate’ the Main Square of Elvas and discover, through more digital content, each object and the curiosities about them.

Sony projectors were used for the Augmented Book and Contanário areas, while the Interactive Table and Sandbox areas required Optoma projectors. All software and content was developed by byAR team.

The new museum was supposed to open to the public in September 2020, though the grand unveiling was postponed, until 18th May 2021, for obvious reasons. While the circumstances around this delay were certainly tragic, the longer window of time meant that the byAR team were able to ensure no logistical challenges got in the way of the installation.

“With VIOSO Anyblend was very easy to accomplish our objectives and the results are very good,” concluded Pereira. “The visitors so far have been really surprised to see this quality level outside of the main Portuguese cities. From our point of view, the software is very simple to use and almost all of the processes are automatic, so we didn’t even need to have support.

“We were introduced to VIOSO in 2017 by Sony, and the relationship has been solid ever since. We’ve been so happy with the VIOSO technology on the Elvas installation that I’m sure we will be working with them again in the near future.”