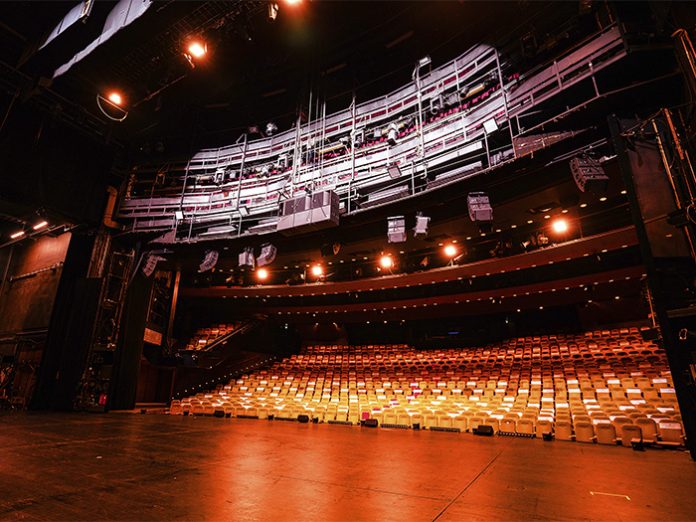 Nestled between two lakes, Näsijärvi and Pyhäjärvi, Tampere is listed on MoveHub’s world’s most popular hipster spots and, with the most saunas in one city, is considered the ‘Sauna Capital of the World’. The city is also home to the Tampereen Työväen Teatteri (Tampere Workers’ Theatre), fondly referred to by locals as the TTT-Theatre. This is one of the county’s main theatres and its recently updated sound system features L-ISA Immersive Hyperreal Sound technology, chosen both with audio excellence and the future in mind, as well as to address historic localisation issues caused by the venue’s extremely wide stage.

Originally, a standard L-C-R system had been specified for the theatre’s major audio overhaul, until Pauli Molnár, sales manager at L-Acoustics Certified Provider Distributor, Audico Systems Oy, introduced them to the concept of L-ISA and its ability to create a completely different listening experience for the theatre’s audiences.

“We did a demo for the team and they were blown away,” said Pauli. “They understood that not only would L-ISA technology deliver more than they wanted in terms of sound quality, but also that it would address some key issues with which they had been struggling.”

The curved stage lip at TTT-Theatre measures a full 20 metres wide, likely one of the widest in Finland. This means that no matter where loudspeakers are placed in a standard configuration, the sound is not properly localized for the audience. In addition to this, the audio team struggled with gain before feedback.

To address the key issue of localisation, L-Acoustics Application Engineer Oskar Meijer designed configuration using L-ISA design methodology that allows the frontal hangs to precisely follow the curve of the stage lip, while ensuring L-ISA quality mapping specs were met. “This made it possible for the loudspeakers to be in front of the actors, who would inevitably come to the front of the stage during their performance,” said Pauli.

To fulfil this requirement, local metal fabrication company, Ypäjän Metalli Oy built a bespoke arced bar from which the loudspeaker arrays were hung. “In a very short time, they designed and built a fantastic solution where the entire frontal system, all nine hangs of speakers, could be moved up or down with just a single motor,” said Pauli.

The final configuration for the frontal system comprises seven ‘Scene’ arrays of three L-Acoustics A10 in vertical mode with two additional hangs in horizontal mode to provide outfill duties. The horizontal deployment option enables sharp horizontal pattern control that minimizes spill into the spatialized L-ISA zone. The system configuration follows the stage lip, with six KS21 subs flown behind the centre hang. Ten 5XT are evenly spaced across the stage lip for frontfill.

For the surround system, 12 X8 coaxial speakers are distributed evenly around the side and rear walls of the auditorium. A further 11 X8, split into three rows of three, four, and four speakers per row, are suspended from the ceiling. Finally, two additional X8 provide balcony fill on the left and right sides.

As for the audio distribution, Pauli explained: “This is a redundant system employing AVB as the primary signal with AES for backup. We have a neat solution using the brand new LS10 Milan-certified switch from L-Acoustics to distribute AVB to the LA4X amplified controllers. Amps are located in three different positions, plus there is a separate room with a further 10 amplifiers.”

The entire installation was completed in just two weeks, with L-Acoustics performing the final calibration of the system and running training for the theatre’s team. “It felt like all the stars were aligned for this project,” said Pauli. “Everything went smoothly, and the attention to detail was incredible. Everyone realised that we were doing something special, so the entire team, both from Audico and TTT-Theatre, shared a common enthusiasm.”

“I feel like I have only scratched the surface of all the new dimensions and opportunities that L-ISA has opened up, but I can already say that we have made a great leap into the future of live sound,” added TTT Sound Designer Kalle Nytorp. “The struggle we had with our extra wide stage is now all in the past and the new system has honestly lifted our sound quality to a whole new level.”

Hamlet The Rock Musical, performed with an original Finnish score debuted at the theatre in the beginning of September and was the first show since lockdown as well as the first with L-ISA technology. World-renowned musical Kinky Boots followed at the end of September.

“When we all heard L-ISA in the venue for the very first time, it was one of those ‘goosebump’ moments,” Pauli exclaimed. “Everybody at TTT-Theatre suddenly realised exactly what they have bought. It was deeply moving to see people’s faces, all silenced and astonished by the sound quality.”

Otso Kautto, TTT’s CEO and Theatre Director, was doubly excited about the new system, as he is also acting as an artistic director for Hamlet The Rock Musical. “I was really keen for the audience to experience our new multidimensional sound,” Otso concluded. “L-ISA brings a new way of experiencing audio to the theatre and adds a refreshingly different dimension to the overall audience experience. We are delighted with the results.”