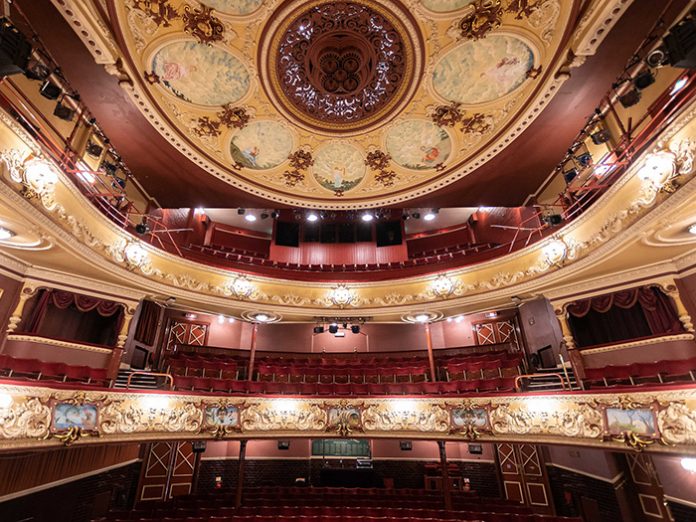 Built in 1894, Theatre Royal Wakefield is a grade II* listed, highly ornate, traditional proscenium arch theatre in the heart of Yorkshire’s cathedral city of Wakefield. The design and vision of the famous British architect, Frank Matcham and one of the smallest remaining Matcham auditoriums today, Theatre Royal Wakefield is a shining example of his ability to create a beautiful theatrical environment within a very tight space. The time had come to replace the theatre’s old and failing PA with a new, modern system that would provide high quality, even coverage across all the seats in the auditorium. Theatre Royal Wakefield’s technical manager, Ms Di Clough, turned to Huddersfield-based systems integrator, Sound and Light Concepts Ltd, who supplied and installed a full HALO-C compact line array system from EM Acoustics.
Despite its bijou proportions, Theatre Royal Wakefield nevertheless has a capacity of 499 seats and the old system was no longer providing the level of service required for a theatre of this calibre. As well as producing around half of its performances, Theatre Royal Wakefield is also a receiving house, so Di invited several local hire companies and independent sound engineers as well as the theatre’s own sound designer to be present for a number of demos from well-known manufacturers, including a comprehensive demo of the HALO-C line array.
“We were looking for a high quality system with excellent intelligibility and sufficient reserve power to meet the wide range and styles of performance we have here,” explained Di. “Budget was also a consideration, of course. However, budget aside, of all the systems we heard over several months, HALO-C was by far our favourite with an impressive throw to the rear stalls.”
Tony Bottomley, owner of Sound and Light Concepts, who assisted EM Acoustics’ Dave Kelland with the demo, confirmed that HALO-C was clearly the box of choice from a sonic perspective. “The verdict was unanimous on the sound quality, but there were several other considerations on the final spec,” he recalled.
“Being an old style theatre with very ornate plaster work, finding a suitable place to install the loudspeakers was a major challenge, especially as there were three levels to deal with,” explained Tony. “The old system had a box for each level mounted on a floor-to-ceiling boom running up the front of each proscenium arch. Fortunately, a pair of HALO-Cs at each level was small enough and light enough to directly replace the old boxes, mounting them on a horizontal boom arm off the vertical boom. This gave us a very discreet installation that didn’t impact the cosmetics of the theatre. The very accurate and controlled vertical dispersion of the HALO-C allowed us to direct the sound into each of the levels (i.e. stalls, circle and upper circle) whilst minimising any spill (hence unwanted reflections) onto the circle and upper circle fronts. As this gave full seat coverage on each level it also meant that we could do away with any under-circle fill speakers and remove any time alignment/quality issues.”
“Finally, it was decided to add a third box to each stack for the stalls just to give a little more headroom, and the system was completed with a pair of EMS-118 subs at the base of the vertical booms.”
Di confirmed that she and her team are delighted with the results. “In fact, many incoming shows have since chosen to use the new PA rather than loading in their own once they have been notified or seen what it is for themselves, and many have commented on its excellent performance,” she continued. “The local hire company now uses our system instead of their own when they are involved in productions here and are very happy with it. It’s made all the difference to the quality of experience we can provide to audiences and production companies alike.”
Sound designer John Trenouth added: “We’re very impressed with the system. After some initial tweaks, including adding slight upper-mid lift which suited our auditorium and final adjustment of speaker alignment, the results have been fantastic. The new system is very clean and effortless with loud transients, and the ability to remotely control EM’s DQ Series amplifiers from FOH made initial setting up so easy.”
emacoustics.co.uk
theatreroyalwakefield.co.uk