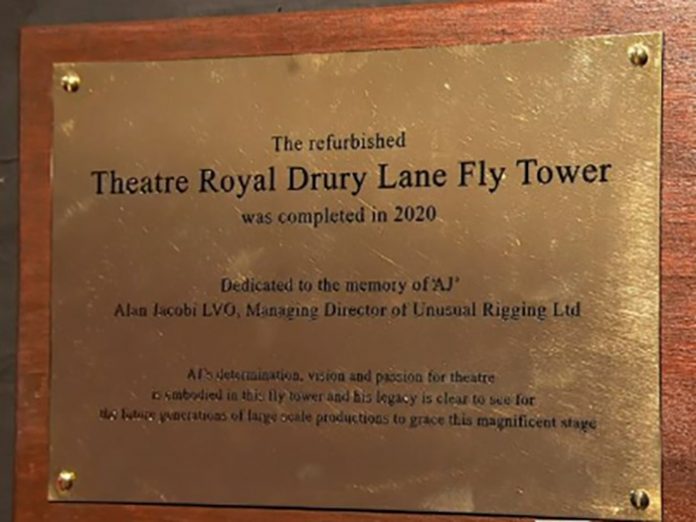 The new fly tower at Theatre Royal Drury Lane has been dedicated to Unusual Rigging Founder, Alan Jacobi, LVO, who passed away in April 2020.

Iin front of an audience of 500 friends, family, colleagues and industry peers, Jacobi’s life was celebrated on the stage of the beautifully restored Theatre Royal with tributes from those who knew him during his early years, through to royalty and his closest friends and family members who were with him in his final days.

The plaque, unveiled by Jacobi’s wife, Peta, during a live stream from the fly tower at Monday’s event, reads: ‘The refurbished Theatre Royal Drury Lane Fly Tower was completed in 2020. Dedicated to the memory of ‘AJ’ Alan Jacobi LVO, Managing Director of Unusual Rigging Ltd. AJ’s determination, vision and passion for theatre is embodied in this fly tower and his legacy is clear to see for future generations of large scale productions to grace this magnificent stage.’

The celebration concluded with a performance of Jacobi’s favourite West End musical hits from  Dynamic Vocals followed by an elaborate Abba Medley from the UK drag collective – The Globe Girls.

Jacobi’s son Tom Harper who has succeeded him as Unusual Managing Director said: “AJ’s greatest legacy is indeed embodied within the work undertaken at the Theatre Royal; to ensure another 300 years plus of exceptional theatre at Drury Lane. He had an invincible certainty that theatre must excel, with the impossible being realised on a production-by-production basis through exact engineering and rigging. This plaque will remain testament to the aspiration and dogged determination of AJ. As a company, Unusual is so very proud to have been involved with such a phenomenal project and to have the fly tower dedicated in his memory, is something that  he would have received as an immense honour. We cannot think of a more fitting way for him to be remembered and for that we are hugely grateful.”