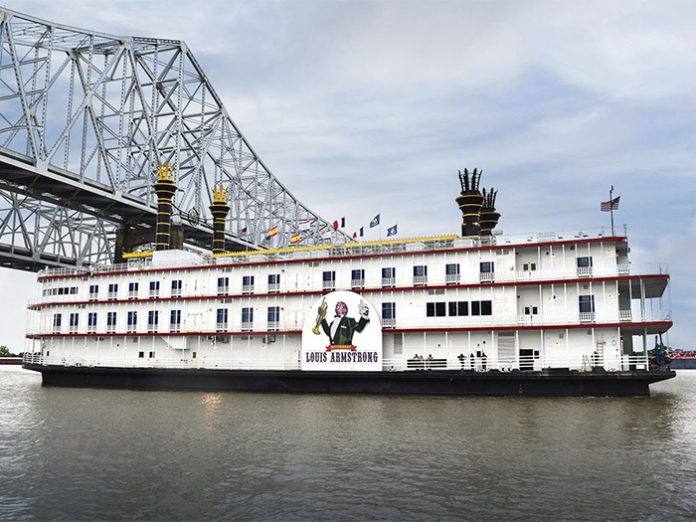 The Riverboat Louis Armstrong in New Orleans is one of the newest – and most impressive – entertainment vessels to float the Mississippi River. The 2,500-passenger riverboat – one of the largest in the region – is berthed at the Canal-Poydras Street dock and Mardi Gras World. The vessel opened for business in November 2019 with accommodations for large and small events, and the capability to keep the party dock-side or to cruise the mighty Mississippi.

And, with a name like Louis Armstrong, the riverboat also happens to be one of the best sounding locations in the city or on the river – thanks to a flexible and versatile sound system powered by Ashly Audio.

“After listening to the owner talk about his needs and then what he was hearing from other vendors I realized the other integrators were telling them they would need to put in a touring-grade system,” said Chris Brown, Managing Director at SOUNd CHeK Music, the integrator of the riverboat’s sound system. “That’s easy. Yet what I heard him say was they would be hosting a number of events here, all separated into different decks and zones. So, what the riverboat truly needed was a flexible set of systems, addressing different needs, and it needed to be intuitive so anyone on the vessel could operate it.”

The Riverboat Louis Armstrong features multiple performance and events spaces for weddings, concerts and other social gatherings. Four different decks of the riverboat have been meticulously designed to allow for multiple events to take place in one evening. The first deck is a multiuse space that can be subdivided to accommodate different types of events. The second deck provides a concert performance venue and a beautiful aft lounge. The third deck is designed with weddings in mind – but can also work for corporate meetings or other celebrations and features the Louis Armstrong Foundation Room. Finally, the veranda deck provides an open-air performance space atop the riverboat.

The riverboat is a passion project. The owner, Warren Reuther, a native-New Orleanian and established entrepreneur in the area speaks of how critical it was that he have beautiful sounding audio on the riverboat named for a jazz icon.

“When Louis was young he wasn’t allowed to play in the bars in New Orleans,” Warren said. “But he could chop it up on the docks as a deckhand. He was able to work his way on the boats in New Orleans. A really amazing piece of his story is here in this city, and I wanted to honor that. It took a few years to find the right boat. And then it took some time to find the right partners – but when I look at the sound system, what Chris Brown did here is really impressive.”

The system also provides the flexibility to share performances between any of the 6 event spaces at the touch of an iPad or wall mounted remote preset.

“I see what he’s built on this boat as a piece of art and history, and I wanted to make sure we provided a sound system that exceeded Mr. Reuther’s expectations and could remain relevant for many years,” Chris said. “Ashly products are incredibly intuitive and versatile. The riverboat is ready for any tour that comes in, and is flexible enough to accommodate any type of artist or band. But it’s also going to work for smaller events and is agile in the sense that people can use the system without any professional training. That’s the beauty of it.”

Chris said the ability to use Ashly software on an Apple iPad was a key component of offering the riverboat staff control over all aspects of the system.

“The iPad app was extremely important,” Chris said. “It works well for a house engineer as it allows them to do a sound check by walking around the room with the iPad to make adjustments. It also allows in-house staff to quickly and easily change the levels on a system for any event that might be booked. Every room can quickly and easily be set up for background music, live music, or any other type of audio you might need. And for an event space, that is critical.”

Chris said the design process was meticulous and detailed – and Ashly’s capabilities allowed for that level of precision on components such as delays based on location.

“The stairwells and aft lounge are delayed to the main stage speaker system,” Chris said. “It’s quite thorough. It sounds great everywhere.”

Warren said the sound quality has more than lived up to his expectations – and that gives him confidence in the riverboat’s name.

“When you name something Louis Armstrong you know the sound is going to be one of the most important things,” Warren said. “When I hear the sound we have on the boat I’m very happy. I expect others will be quite happy as well.”