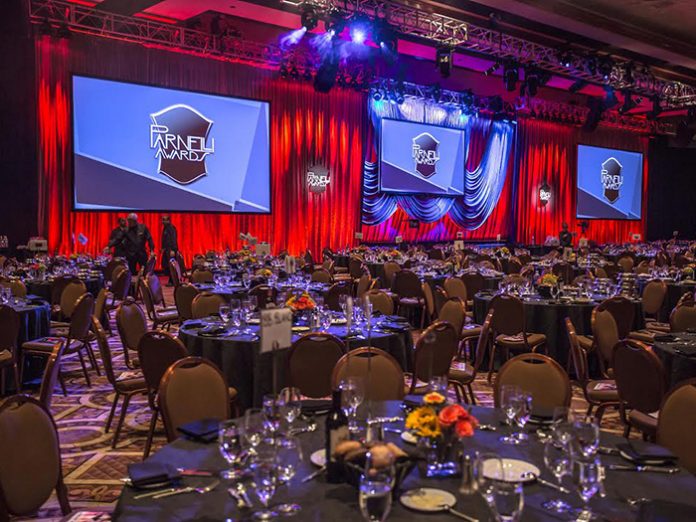 The National Association of Music Merchants (NAMM) and Timeless Communications Corp. (TCC), publisher of Projection Lights & Staging News (PLSN), FRONT of HOUSE (FOH), and Stage Directions have formed an alliance to serve the live event production community at The 2018 NAMM Show, the organisation’s annual trade-show in Anaheim, California (January 25-28). As part of the agreement, TCC will bring its premier award show for the live production community, The Parnelli Awards to The NAMM Show creating a one-stop event for industry pros.

“With our shared passion for music, we believe that the live event and production professionals are kindred spirits with the manufacturer, distributor and retail members of NAMM,” said Joe Lamond, President and CEO of NAMM. “And at the Awards, we could not be more excited to celebrate the accomplishments and contributions of the many live production professionals and companies. We look forward to welcoming this community to share in the career enhancing networking and education opportunities, and of course, to experience the amazing new sound and lighting product introductions on The NAMM Show floor.”

The annual Parnelli Awards recognise pioneering, influential professionals and companies, and their contributions to the live production industry. Founded in 2001 and named after industry luminary Rick “Parnelli” O’Brien, the awards bring together the live entertainment community in a vibrant annual gathering to recognise the best-in-class across 22 different categories such as “Lighting Designer of the Year,” “Sound Company of the Year,” and “Rigging Company of the Year,” and the coveted “Lifetime Achievement,” “Visionary,” and “Audio Innovator” awards. Past recipients include Greg Mackie (Mackie Designs, LOUD Technologies), Richard Fernandez (tour manager for The Eagles, Tom Petty, Bob Dylan, etc.) Danny O’Bryen (Screenworks co-founder), John Meyer (Meyer Sound Laboratories), Pat Quilter (QSC Founder/Quilter Amps), and many others. Notable musicians, among the likes of Tom Petty, Brooks & Dunn, Kenny Chesney, Todd Rundgren, Paul Anka, Adrian Belew, and others have also participated in the awards to honor the professionals who make live production possible. The Parnelli Awards will relocate to The NAMM Show from Las Vegas and will be held on Friday, January 26 at the Anaheim Hilton Hotel.

From school band concerts, to houses of worship, to the largest tours and festivals, seemingly every music event today has a sophisticated element of production in it, and The NAMM Show has evolved to reflect this, growing from its original gathering of 52 piano dealers in 1901 to become the stable, reliable business platform for the global music, sound and entertainment technology products industry.

For industry professionals who make their living using these products, the show has become the crossroads of the music ecosystem and the hub for industry-leading professional development. With the expansion of the Anaheim Convention Centre in 2018, The NAMM Show will be able to meet the demand coming from these sectors as a event where industry pros can expect to benefit from robust professional development and education opportunities, as well as numerous networking events on the trade show floor.

“Finally, the entire performance/production community will be together under one roof,” remarked Terry Lowe, President of Timeless Communications, Corp. “We are committing all our resources behind this to ensure this partnership’s success. And this is an especially great move for the Parnelli Awards. As we’ve watched it grow in stature and prestige over the years, we’ve known it deserves a more fitting place, and there is no other than NAMM. This move allows us to take the show to the next level.”

The NAMM Show will be held January 25-28, 2018 at the Anaheim Convention Centre.