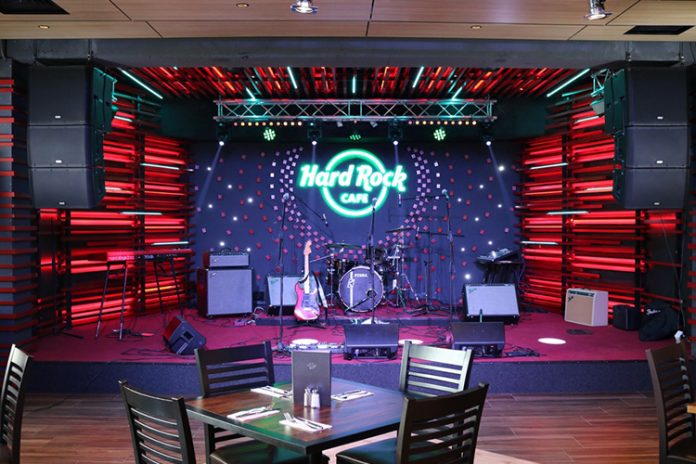 The Hard Rock Café in the capital of the Republic of Georgia recently opened its doors in a former wine factory here in the historic Vera district. The newly designed multi-level venue features a restaurant, several indoor and outdoor bar areas and a live performance stage. Companies Mifasi and PAXT teamed up to design and implement the sound system for the entire venue, which features K Series powered loudspeakers, KLA Series powered line array loudspeakers, Acoustic Design loudspeakers, and CXD Series amplifiers, with all audio routing, management and processing controlled by the Q-Sys integrated system platform.

The management team at the Tbilisi Hard Rock Café chose Mifasi, also based in the Georgian capital, who have enjoyed a high profile in the country in for their system design and installation work at Georgia’s largest football stadium, the Boris Paichadze Dinamo Arena. The stadium project was a collaboration with QSC’s United Kingdom-based sales, export, design and installation partner, PAXT, and the Tbilisi Hard Rock Café project saw PAXT and Mifasi team up again. Working jointly on the design of the system, Mifasi handled the bulk of the installation, while PAXT oversaw the final tuning of the system prior to the venue opening.

As a multi-level venue requiring several zones of audio for both pre-recorded music and live sound as well as safety announcements, designing the ideal system for the venue was challenging. “The site extends over two floors, and we were tasked with providing sound for four different areas, all of which had to be linked to a sound system that could handle music playback and also transmit paging messages and safety announcements if required,” explained James Martin, Product and Technology Specialist at PAXT. “All Hard Rock franchises have a proprietary playlist-controlled media server installed to output background music during business hours, but there had to be some way of being able to route the output of that to the different zones, process and control audio levels throughout the venue and make announcements through the installed loudspeakers when required.”

“Live music is a very important element in Georgian nightlife, so in addition to equipping the  outdoor patio and indoor restaurant and café/bar areas, there is also a performance stage, which needed PA speakers and playback monitors for the musicians, just like the stage in any music venue,” James continued. “We also had to be able to route the audio from the stage to the loudspeakers in the other parts of the venue if required.”

Mifasi and PAXT created the ideal design for the Hard Rock Café, with passive two-way Acoustic Design AD-S6T and AD-S112sw subwoofers used in the indoor restaurant and café/bar areas. Because of their resistance to weather, Acoustic Design was also deployed on the outdoor terrace. There are 16 AD-S6Ts in total, and eight AD-S112sw subs, driven by twin CXD4.3Q amplifiers. The KLA line array loudspeaker system provides consistent, even coverage for the audiences in front of the live stage, with the left and right channels each comprised of two KLA12 line-array elements with an added KLA181 subwoofer. Four K10 active loudspeakers are used on the stage as floor monitors for the live performers.

Overall control for the system is handled by the Q-Sys Integrated System Platform featuring a Core 110f processor. “While Q-Sys has always been an excellent system for large installs, the introduction of the Core 110f has made it more accessible and opened up a world of possibilities for smaller venues like this one,” explained James. “Given the zoning and routing requirements at the Hard Rock Café, Q-Sys was the obvious choice. The Hard Rock Café’s own music playback system is connected to the Core 110f, which then handles all the routing and processing throughout the venue, and also controls the two CXD amps, which drive the passive AD speakers throughout the venue.”

Master control of all of the audio sources in the venue is available to the staff via the easy-to-use Q-Sys touchscreen interface, with live audio from the stage able to be routed anywhere in the venue. The system was pre-programmed by PAXT and Mifasi to automatically vary the levels of output during various business hours, for example to automatically raise the speaker output as the venue fills up during the course of an evening and then to gradually become quieter again as closing time approaches.

“As always, it was a pleasure to work with Mifasi on this project from the initial design and quotation through to the installation and commissioning,” added Tim Pollard, PAXT’s Managing Director. “The Hard Rock Café is an excellent showcase project for QSC in Georgia and we look forward to working with Mifasi on future projects in the region.”

Mifasi Marketing Manager Levan Ostaevi concluded: “We offered the Hard Rock Cafe a complete QSC solution which would meet all their demands. The café is completely satisfied with the result, and it has been well received by staff and customers.”