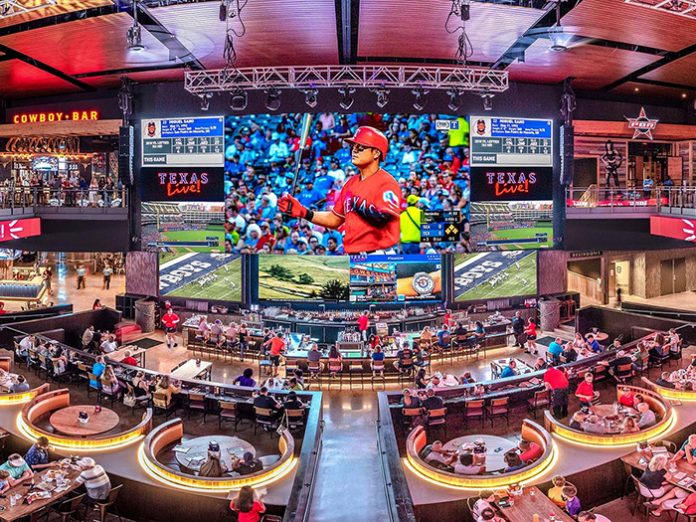 They say everything in Texas is big, and the new 200,000 sq ft Texas Live! entertainment complex certainly fits that bill with its ample array of dining, live music, and other entertainment options—and, next year, the first Live! by Loews boutique hotel. Backed by the Texas Rangers and City of Arlington, among others, the vast $250M complex recently celebrated its grand opening, an event heard loud and clear via Kara and Kiva II systems in two of its primary performance spaces networked via AVB and processed by the Lone Star State’s very first installed P1 digital audio processor.

“When looking to equip these two venues with the best possible quality sound reinforcement, we felt that L-Acoustics gave us the biggest bang for the buck,” said Dan Defendorf at Baltimore-based Cordish/ECI, which owns and operates Texas Live!, among other sports and entertainment destinations around the country. “Texas Live! hosts a lot of national touring artists, and L-Acoustics satisfies them all when it comes to rider requests, which was an important factor in the decision. Plus, the Kara and Kiva II systems are delivering ideal coverage in their respective venues and sound absolutely phenomenal. We made the right choice!”

Arlington Backyard’s system comprises 24 Kara enclosures split between two hangs on either side of the stage, each backed by five flown SB18m subs. Additionally, four coaxial X12 enclosures serve as side fills, while six X8 are used as front fill. Everything is powered by 11 LA4X amplified controllers.

“Our main reason for choosing the Kara system in Arlington Backyard, our main concert venue, was popular demand,” confirmed Texas Live! Entertainment Director and Chief Engineer Michael Roberts. “We wanted to make our artists happy and provide an unforgettable experience for our guests. No one complains or asks for anything else when I respond with our venue specs.”

Live! Arena, described as the ‘living room’ of Texas Live!, is home to 16 ultra-compact Kiva II enclosures flown eight per side with three SB15 subs atop each hang. These are buttressed by four ground-stacked KS28 subs in end-fire mode, plus eight X8 as fills, all powered by three LA12X and two LA4X amplified controllers.

“I’m extremely surprised and delighted with the output of the Kiva II system,” Michael added. “They are also very versatile; diction from TV audio is amazingly clear in such a reflective space. We struggle with this at similar venues around the country. Dan Palmer (Business Development Manager, Sports Facilities – USA and Canada) at L-Acoustics was extremely helpful in answering all of our questions, and his hospitality during our visit to the main office was first-class.”

Each venue had its own design challenges, including harmonious integration with a 100-foot LED screen. “The Live! Arena has one wall that’s entirely glass, and the owner specifically wanted to install an LED screen that’s as big as possible,” explained Jason Pritchard, senior design engineer for Coherent Design. “That set up two distinct challenges: keep the sound off the glass wall to avoid reflections while keeping the direct sound on the audience; and having speakers that were small enough to not interfere with the sightlines for the LED wall, but were also powerful enough to fill the room clearly and without distortion. The Kiva II speakers solved both of those issues: they’re quite compact but have plenty of power, and the DSP allowed us to refine the arrays’ performance with the precision needed to keep the energy off the glass on the dancefloor.”

For Arlington Backyard, the Kara speakers put plenty of energy into the room and fulfilled another stipulation by the owners, who wanted a rider-friendly brand in the house to minimise the amount of system movement as different artists passed through. However, the designers also had to be wary of LFE control. The new Live! by Loews boutique hotel would be built along one of the venue’s walls, and noise containment from the venue with respect to the hotel property was a priority. That was managed by arranging the ten SB18m subs in a custom cardioid array. “It really does confine the energy without diminishing the impact in the venue,” he said.

Biamp Tesira DSP serves as the campus-wide network backbone, which includes LA12X and LA4X networked using AVB protocol throughout the eight venues that comprise Texas Live! “The LA amps worked perfectly right out of the box,” Jason said.  That was echoed by John Van Stipdonk, engineering supervisor at AVI Systems, who noted that the inclusion of the P1 processor in the sound system vastly simplified achieving the sound and pattern control that they wanted. “With the P1 acting as a bridge between the amplified controllers, it does most of the processing work and lets the amps very efficiently focus on the task of delivering power rather than also having to provide EQ and other DSP.”

Van Stipdonk also points out that the interoperability between the LA12X, LA4X, P1, and Biamp Tesira allows music performed at either of the venues to also be routed to any of the other seven locations in Texas Live!, as well as to the plaza surrounding it. “If you have to go anywhere else in the complex—to another bar or restaurant to get your favourite whiskey, for example—you can still hear the show from the Backyard or the Arena pumped through any of those sound systems,” he said. “And the L-Acoustics systems plugged seamlessly into the AVB network—it took all of five seconds to route it and lock it. This is a big place, but between L-Acoustics and AVB, we got it covered.”