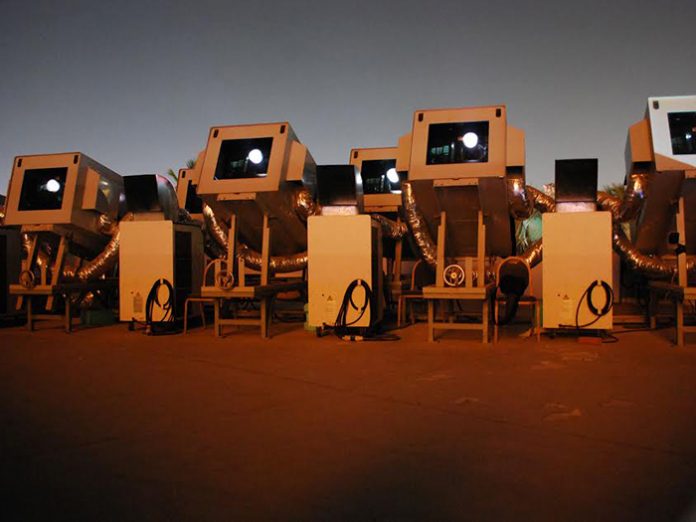 Tempest has helped to illuminate the iconic sail-shaped Burj Al Arab Jumeirah in Dubai as part of a unique projection mapping project. The world’s leading manufacturer of projector enclosures supplied Cyclone 8500 enclosures, Cyclovator Tilt Kits and the world’s first installation of its innovative AC Assist technology to protect 14 Barco HDQ-2K40 projectors from the searing Dubai heat. The system has allowed the 300 metre high building to become a jaw-dropping canvas for a spectacular video mapping show featuring animated Arabic motifs. The project will be officially opened by His Highness Shaikh Mohammad Bin Rashid Al Maktoum, Vice-President and Prime Minister of the UAE and Ruler of Dubai on UAE National Day 2nd December, 2016.

Built to resemble a billowing sail, and standing on an artificial island 280m off the coast of Jumeirah beach, the Burj Al Arab Jumeirah is one of the most iconic and luxurious hotels in the world. As part of a general refurbishment (including replacement of architectural lighting), end users Jumeirah International LLC required a video mapping solution to use on the front atrium sail wall. With temperatures reaching more than 50C in UAE, the install presented a serious challenge. IBSTempest – a partnership of Tempest Enclosures and the Middle East’s leading equipment protection solutions provider – was asked to provide a solution to protect the powerful 40,000 lumens projectors.

“The challenge for Tempest was the Dubai beachside environment – we regularly see night temperatures approaching 40C, and the humidity can be unbelievable here in summer,” says Gavin Coxon, Director of IBSTempest in Dubai. “The Barco projectors have 7,000 watt Xenon lamps, and will shut down if they see a temperature of 35C or above. At the same time, the air is full of salt, and condensation has to be avoided at all costs – what a nightmare! Tempest’s AC Assist solves all these problems by combining dehumidified cooled air with outside air when the projector lamp is running, dropping the temperature of the air entering the enclosure to a very safe 25 or so degrees.”

IBSTempest worked closely with integrators Martin Professional Middle East LLC for the project, which required the enclosures to be arrayed on two separate rooftops on the beach side of the causeway to the hotel. Tempest’s AC Assist technology has been able to reduce the air temperature going into the enclosures by 10-15C. This was developed using Outdoor Spot Cooling technology and custom inlet cowls that blend cooled and local air to minimise the risk of condensation inside the enclosure, and to allow the draw of local air when the coolers are not in use. The coolers are triggered via DMX using an RDM-R25 (Jese UK) allowing them to be controlled on the same DMX circuit as the DEC3 enclosure controllers. The coolers are setup to switch on and off simultaneously with the projectors.

A total of 14 Cyclone enclosures with 14 Cyclovators (for accurate vertical adjustment) were provided. The enclosures were customised with side access panels to allow for projector lamp maintenance without the need to lower the enclosures, and custom powder coat colours were used so the enclosures would blend in seamlessly with the areas they are located in.