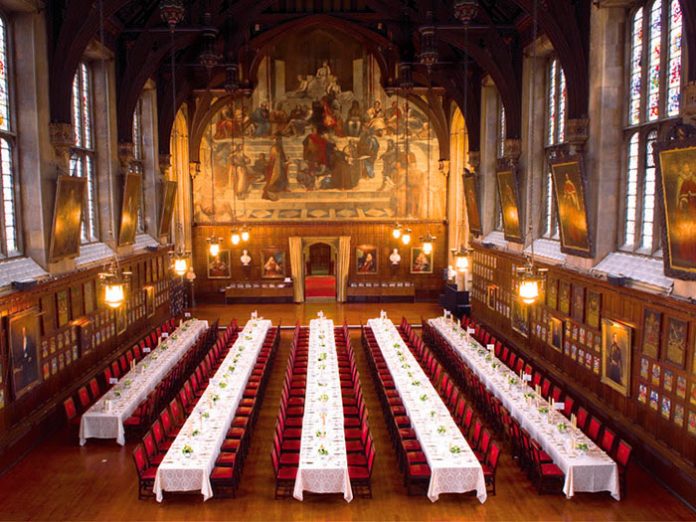 The Honourable Society of Lincoln’s Inn is one of the oldest centres of legal learning in the UK, with its origins sometime in the late 14th century when an active society of lawyers was in existence. One of the four ‘Inns of Court’, Lincoln’s Inn is situated in the cluster of historic buildings that is now Holborn, close to Westminster and the City of London.

Lincoln’s Inn is now a popular conference and banqueting centre hosting weddings, corporate events, product launches, graduation ceremonies, conferences and seminars. The Great Hall, the largest room with a dining or theatre style seating capacity of 600, was opened by Queen Victoria in 1845 and boasts a magnificent fresco depicting the world’s lawgivers from Moses to Edward I.

The Great Hall’s out-dated PA system was struggling to cope with the new and varied demands of a modern conferencing centre, and so Facilities Manager John Newson got in touch with Aura Consulting, who in turn recommended Peter Mapp Associates for a sound system solution that would be capable of adapting to a much wider range of applications. Peter’s extensive experience and specialisation in the acoustics of listed buildings such as these made him the obvious choice to consult on a project of this sensitivity.

According to John the location of the loudspeakers in the original installation were far from ideal, resulting in insufficient coverage of some areas of the Great Hall, emphasised by complaints from clients of a lack of speech clarity. What was needed was a loudspeaker system with markedly improved intelligibility properties and ability to better focus the sound where it was required with greater accuracy.

“On my first site visit it was clear to me that a specialist loudspeaker system was called for due to the long reverberation time (over 2 seconds at mid frequencies) and restrictions on placement. There was also the need for the hardware to be very unobtrusive and not detract from the building’s architecture,” said Audio Consultant Peter Mapp. “I specified the Tannoy QFlex system because of its ability to digitally steer the sound to the specific areas that we needed to cover.”

As well as a requirement for a highly intelligible sound system, the client also wanted a solution that would be straightforward to operate, be unobtrusive and have minimal impact on the Great Hall’s aesthetics.

“The layout of the building and its listed status meant that there were limited available locations to site loudspeakers and therefore the QFlex was a good choice because of its ability to deal with the challenging acoustic environment, together with a slim profile and the options to colour match to the surroundings,” commented Peter.

Extensive EASE modelling was used to help optimise the loudspeaker placement and predict the coverage and potential speech intelligibility in the Great Hall, which measures 120 ft long by 45 ft wide with a voluminous ceiling height of over 60 feet. The EASE predictions indicated that two QFlex 48 digitally steered line arrays covering the main body of the hall and two VLS 30 passive column array loudspeakers covering the dais would achieve the desired result.

London-based KEL Sound and Vision won the tender to carry out the installation, having considerable experience of challenging acoustics, and having worked with Peter on projects previously. Over the course of a week, KEL Director Chris Gutteridge and his team worked around the events still scheduled in the Great Hall to install cabling and locate the loudspeakers so as to minimise down time.

The QFlex 48 uses multiple, densely spaced, transducers arranged in a vertical steerable array within the column to provide highly intelligible speech and music reinforcement, in an architecturally sensitive housing with a range of available custom finishes. The four interconnected units that make up a single QFlex 48 line array house a total of 48 drivers, each with its own discrete channel of amplification and DSP, offering an industry leading beam steering range of plus or minus 70 degrees. The loudspeakers are custom-coloured to match the walls and are discreetly positioned at the sides of the soaring stained glass windows.

“The QFlex48s were sited above the wooden paneling, about five metres down the hall,” said Chris. “They were assembled at ground level and then lifted as one unit and fixed into position on the standard Tannoy mounting brackets about eight metres from the floor. The two passive VLS30 loudspeakers required custom brackets as we were not allowed to drill into the walls of the listed building.”

The loudspeaker system is controlled by a matrix mixer, which allows the various Sennheiser wireless microphones and Audio Technica wired microphones to be mixed and controlled according to the actual events taking place in the Great Hall.

“Using Tannoy’s BeamEngine interface we were able to specify the target areas within the venue,” explained Peter. “The system then generated beam steering algorithms which were tailored to those specific areas and then optimised using EASE.”

“We were really surprised at how good the Tannoy speakers are compared with the previous system,” said Chris. “The intelligibility is quite exceptional everywhere in the building.”

“The client is very pleased with the result,” said Peter. “It more than meets their expectations. Acoustically the system matches the EASE predictions very much as expected, and delivers very good intelligibility throughout the space.”

According to John, the improvement in sound quality is substantial, especially with regard to better coverage and vocal clarity in the opinion of the participants at Lincoln’s Inn many events. “We offer a wide variety of hospitality events from trainee barrister pupillage to memorial lectures, business events and dinners, wedding receptions, question and answer lectures, and military regiment dinners,” he commented. “We also cater for a very wide age range, from 20s to 90s, so it’s important that everyone is able to hear clearly no matter where they are in the hall.

“The sound quality is 100% improved for all the events we stage in the Great Hall,” concluded John.