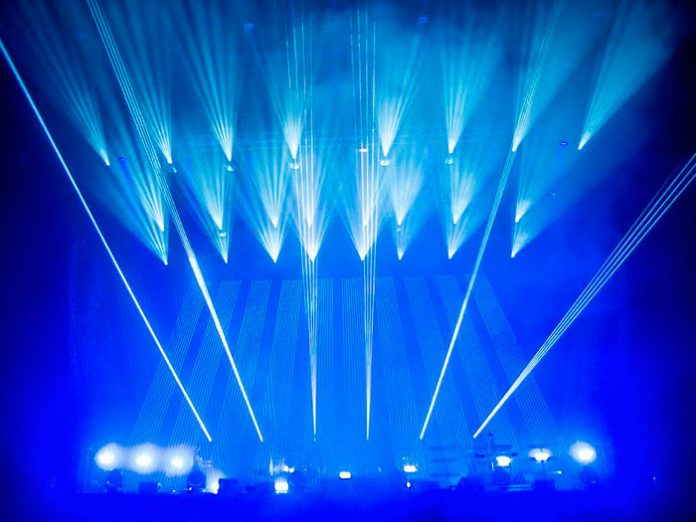 Robe BMFLs are the latest major addition to the house lighting rig at the famous Rockhal in Esch / Alzette, Luxembourg.

The country’s best known club and concert venue is located appropriately in the Avenue du Rock ‘n’ roll in the epicentre of the magnificent steelworks which once dominated the region of Esch-sur-Alzette, now the site of a 450 million Euro redevelopment project to preserve the former industrial magnificence of the disused plant, in the process transforming the area into a bustling scientific and cultural centre.

The Rockhal, opened in 2005, is also the largest major concert venue in Luxembourg and regularly hosts a string of international artists who can play its 6500 capacity main hall, a smaller club space for 1,100 people or the 250 capacity ‘The Floor’.

It also has a Music & Resources Centre with an infrastructure of rehearsal rooms, a recording studio, a media library and a team of professionals working together with the local music scene in order to guide and support them with their artistic projects.

The main hall is completely flexible, with a stage that can be configured in numerous formats. An incoming show can either be supplied with a full house PA and lighting system; they can install their own floor / specials packages underneath and use the house top rig; or they can have everything removed and take in their complete touring rig. Currently there’s around a 50/50 split of those bringing in their own production or utilising some or all elements of the house lighting.

Although the Rockhal is partly funded by the Ministry of Culture, the major part of its budget is self-generated from profit out of the day-to-day business. This is achieved by renting the space out and by acting as a promoter in its own venue, leading to a unique superstructure with a small but efficient stage for emerging acts, right up to hosting international arena productions, acting as a promoter with contacts to all the important international agencies whilst also offering space, infrastructure, knowledge and advice to artists starting their careers – in short Rockhal is a place that offers opportunities and synergies rarely found in a standard venue.
Heading up all the technicals is Technical Manager Elmar Hubert.

The Club space has always had its own lighting rig since the Rockhal opened, and the moving lights purchased at the time were Robe ColorSpot and ColorWash 575 E ATs – which – like all quality products – are still going strong.
The first equipment investment for the Main Hall happened in 2009 with the purchase of d&b J PA and d&b monitor system , after which the first Main Hall lights – also Robe – were bought in 2011, comprising 14 x ColorSpot 700E ATs, 14 x Colorwash 700E and four LED Blinders.

As the success of the Rockhal mushroomed and they were staging an increasing number of shows, the time to upgrade the lighting rig soon arrived. Elmar explained that they wanted fixtures that were brighter and more powerful than the 700 series luminaries, and at the start of 2014 started looking at what was available and what would be coming on-stream.

Lighting Designer Dan Robinet added: “We wanted a new fixture and something for the future, a unit and a brand that would be accepted by all the major artists playing here as well as one that would ideally have value as a cross-rental item.”

With nearly 18 metres of headroom in the Main Hall, obviously they also needed a large light source. A shootout was conducted between the offerings of the major brands. Robe’s reliability was already proven through their previous purchases, and although some anticipation was involved with the BMFL Spot as it was a completely new fixture, it seemed to tick all the boxes, and there was a massive amount of excitement surrounding the launch.

There was also the all-important question of support, and through past experience, they knew that this would be first class from Robe’s Benelux distributor Controllux. The BMFLs were delivered via their Luxembourg sales partner Showtrade, headed by Christian Műller.

The 16 x BMFLs, together with 16 x LEDWash 800s bought at the same time, arrived just in time for the Sonic Vision Festival, a new three day event including workshops and seminars related to rock music as well as a series of live performances. The set-up included an outdoor stage and Dan was the production designer for all areas that needed to be lit.

“The colour mixing is also great and the light is compact and easy to handle,” said Dan, also mentioning that the BMFL colours match that of the older fixtures really well and are completely compatible with LEDWash 800s.

“We know first-hand that Robe products can last over 10 years with constant hard usage,” he commented, which is a crucial consideration for their ROI which is very different from that of a rental company.

Elmar offered: “The BMFLs will work with pretty much whatever lights and set up that might be brought in as a floor package.

“This proper versatility and the capacity to stage our own shows to the highest standards of creative and technical delivery is exactly what we wanted.”

The Rockhal stages around 200 shows a year and welcomes in excess of 200,000 visitors. Recent artists appearing include Prince, Stevie Wonder, Nickelback, OneRepublic and many more.

It also serves as a rehearsal venue for international arena production – Muse, Tokio Hotel and Depeche Mode have all rehearsed there in the past, and more recently this summer, Faithless and The Chemical Brothers were among other taking advantage of all its facilities.

It is a busy schedule for a small and dynamic country that is passionate about arts, culture and live performance, and the Rockhal’s reach is far beyond the national borders and those near to France, Germany and Belgium but also on a European level.