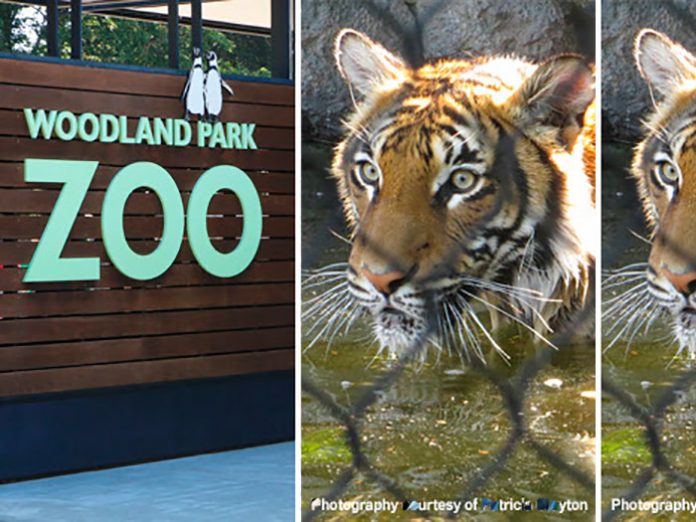 The mission of the Woodland Park Zoo is to save wild animals and their habitats. By raising awareness among over one million yearly visitors, the zoo educates and empowers people to take action on behalf of the earth and its animal inhabitants. The Banyan Wilds tiger exhibit is the most recent installation towards this effort.

Tigers at a Crossroads
There are approximately 3,000 tigers left in the wild, which puts them at a crossroads about whether or not the species will survive. Taking that theme literally, the Zoo designed the tiger pen to be located at a crossroads in the middle of the exhibit.

In order to realise the promise of this exhibit, the zoo needed an easy-to-use speaker solution that accommodated the shallow and wide dimensions, and supported a level of intimacy that enabled visitors to hear everything the tigers were doing, and that the zookeepers were saying.

The team hired to create this solution comprised AV design consultancy AEI, and integrator AVI-SPL. “We’ve worked with both AEI and AVI-SPL for about a decade and they’re really good at understanding our quirky needs,” said Jay Wallace, IT Systems Administrator for the zoo. “We’re a strange hybrid of a theme park and a naturalistic experience, and they both get that.”

Why Tannoy QFlex 16 was the Right Solution
Knowing that a successful speaker solution would allow zookeepers to address visitors at a comfortable, conversational level, while keeping the sound contained within the area, Thom Mullins, Senior Consultant with AEI, chose the Tannoy QFlex 16 speakers. “The exhibit has a limited area where zookeepers train the tigers and interact with the audience. We needed a speaker that could be relatively short, easy to mount and hide, and still provided adequate pattern control.”

As a line array, the QFlex 16 enabled the zoo to focus the audio dispersion to cover the exact area they needed it to, while not spilling over into adjacent exhibits. According to Grant Nelson of AVI-SPL: “It’s very easy to install, all the speakers are self-contained in one box for an aesthetically-pleasing design, it provides almost 180° width dispersion, beam-steering control allows the audio dispersion to be adjusted programmatically, and because this exhibit is outdoors, it was important to be able to weather-proof the speakers.”

Specifically designed as a self-contained solution to challenging acoustic environments, the Tannoy QFlex 16 is often used in Houses of Worship, transport hubs, and museums and galleries. As a compact, standalone modular unit, the QFlex 16 is a self-powered column array that produces highly-intelligible audio with a low visual impact–a key concern when naturalistic or artistic design is a priority.

Results You Can Hear
Getting visitors as close as possible to the tigers in a naturalistic habitat was important to the zoo. “Rather than create a cage or put the animals behind an artificial barrier, they chose a layered plexiglas,” said Thom. “Getting rid of the visual barriers made it possible for visitors to really feel like they’re right there with the tigers. We were able to mount the QFlex in a way that blended with the naturalistic environment, not took away from it.”

To perfect the zookeeper audio, Tannoy’s VNET software was used to steer and tune the speakers as needed for the size of the audience. Feeding the audio on the front end was a configurable DSP running on the zoo’s CobraNet/Dante network. When the zookeepers speak into their wireless microphones, the sound is brought back into the DSP, and played through the QFlex 16 speakers with comfortable clarity.

The design methodology Thom used was the same as that for concert halls: The solution needed to pick up the near fields as well as the far fields of the exhibit, so visitors could hear the tigers clearly no matter where they were in the pen. Wired microphones were placed up high around the pen, and as with the zookeeper audio, the sound was routed through the DSP and played back over a pair of loudspeakers attached to the glass.

In addition to the speaker solution, interactive experiences were distributed throughout the exhibit to further tell the story of the tigers’ struggle to survive in the wild. By installing the Tannoy QFlex 16 speakers and creating a system that blends naturalistic experience with high-quality audio, the Zoo will be able to communicate the plight of the tigers clearly and efficiently to millions of visitors every year.

“The Tannoy QFlex 16 is a very natural sounding system and it’s very easy to work with.” Thom said.

“We literally took it out of the box, turned it on, did a little tuning to control the audio dispersion, and it was ready to go. It just sounded great right out of the box.” stated Jay Wallace.