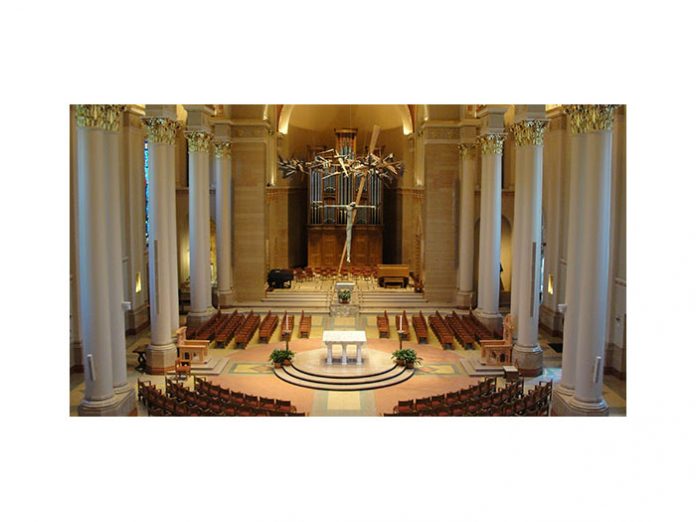 As the seat of the Archdiocese of Milwaukee for over 150 years, the Cathedral of St. John the Evangelist has not only been an important place of worship, but an enduring local landmark. Constructed in 1893, its austere grandeur has led to it being listed in the National Register of Historical Places. Consequently, the preservation of the cathedral’s elegant interior has always been a major concern and one of the reasons for the 2014 installation of a suite of TANNOY QFlex and VLS loudspeaker arrays.

When the previous sound system – installed in 2002 following the restoration of the interior – began to fail, the church engaged David Hosbach, President and Principal Design Consultant of Milwaukee’s DSH Audio Visions LLC. Initially, Hosbach provided a temporary solution to deal with the system’s unreliable processing, but there were also coverage and intelligibility issues. David stated that it became apparent that he was going to have to look at the loudspeaker layout.

Prior to 2002 the high altar was located in a traditional footprint at the Cathedral, which is lined by columns on either side. David commented about the situation: “With the artistic renovation of 2002, the altar and presiders’ chairs were moved to a more central location on opposite sides of the nave, 50-feet apart. Over time, it became clear the previous system didn’t address these changes adequately. The Archbishop and Parish Priest conduct Mass at different times, with the priest presiding most often.” David stated the old system had speakers located on the Archbishop’s side, which created an echo/surround effect when the priest led Mass that diminished clarity substantially. The new system addressed that issue.

As both a Choir Director and System Designer, Hosbach has a unique understanding of the challenges traditional liturgical spaces present, and TANNOY is among the top manufacturer’s products he’s likely to deploy for this type of application. David explained that in a cathedral, TANNOY products are one of his favourites because the coverage is extremely consistent, as they sound clear and natural, and are easy to set up.

Still, the major issue was that the congregation couldn’t hear clearly, explains Scott Eakins, St. John’s Director of Liturgy and Communications. “The loudspeakers that we used previously were also steerable arrays, but the TANNOY are much better. Often, I even forget they’re there because they’re painted the same colour as the columns. You don’t notice them.”

The Cathedral’s music program features both internationally known and local artists, but the TANNOY system is used primarily for speech reinforcement, vocal soloists and cantors in the 700-person capacity sanctuary.

David stated the room acoustics are just about perfect for music, but with an RT60 or approximately 2.5 seconds it’s less ideal for speech. The reason for the David’s usage of steerable arrays was that we wanted to keep sound from getting too far up into the airspace.

Additionally, 2 VLS 30s are deployed on either side of the organ console to cover the apse and 6 VLS 7s are mounted on columns to provide sound for congregants standing in the aisles and in areas where shadowing was an issue.

The 64s now provide the foundation for the speech coming from the ambo and the tightest, most broadband, directional control front to back.

The 64s supported by the VLS and the QFlex 48s face forward from the altar position and the 32s cover-seating areas behind the altar.

The accuracy of QFlex was key to Hosbach’s choice because he now prefers the way they steer – without creating the potential for interference zones. David explained that it’s as if aiming a traditional speaker, but with smoother coverage, which results with the performance of a large format, traditional horn and bass horn without the visual distraction.

David concluded with the following: “The VLS are equally discreet and engineered to aim sound down 10 degrees even when installed flat on a surface.” Also, they sound similar to QFlex. So it doesn’t matter where you sit, it sounds the same and is just as clear.”

Mike Jonas, Senior Project Manager at Clearwing Systems Integration, who handled the install, agrees: “We’ve used TANNOY in a variety of projects. QFlex really are a great solution for liturgical churches and TANNOY has a variety of products that work well for me.”

In addition to the TANNOY system, Hosbach designed an integrated video system, with ambient microphones, cameras and post-production capabilities, so services may be recorded and streamed to a wider audience.