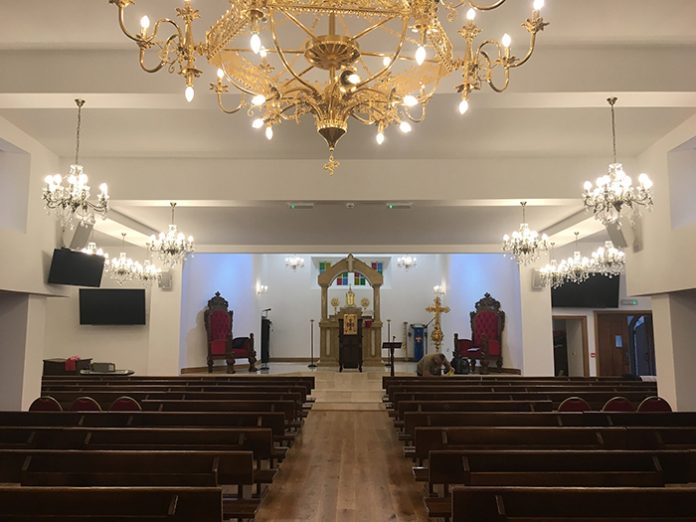 Of the many Houses of Worship visited by AV installation company, Old Barn Audio (OBA), the Syrian Orthodox Church in East Acton will rank as one of the more unusual.

Fitted out with Martin Audio’s radical CDD (Coaxial Differential Dispersion) sound reinforcement in time for its consecration in November, the church is described as “an autocephalous Oriental Orthodox church based in the Eastern Mediterranean, with members spread throughout the world.” Due to the war in Syria, the community of Syriac Orthodox Christians in Britain has grown considerably.

The Church employs the oldest surviving liturgy in Christianity, the Liturgy of St. James the Apostle, and uses Syriac, a dialect of Aramaic spoken by Jesus Christ and his Apostles, as its official and liturgical language.

OBA was one of several companies asked to tender, and was awarded the contract largely as a result of director Neil Kavanagh’s pedigree in the HoW sector. “I have fitted out more than 250 churches and have wide experience working in Grade 1-listed buildings,” he says.

This may not fall into that category but is certainly a traditional, solid built church, which has now been completely reconfigured. “Aesthetics were vitally important, and we would only specify Martin Audio for a project such as this,” states Kavanagh of a building that will accommodate up to 250 congregants.

Dividing the space into four zones, and opting for discreet white versions of the CDD, he specified six CDD8 (8”) for the main nave, two positioned either side of the altar and the remaining two pairs mounted in portrait mode down the length of the aisle, radiating sound into the congregation. With the reduced ceiling height of the side aisle, a further white CDD8 has been deployed.

A separate hall can be used either as an overspill, or with the addition of bifold doors, become an independent space, although a 50 inch LCD screen enables the activity from the main church to be relayed from the altar camera via the matrix switcher.

Meanwhile, Neil Kavanagh has turned to a pair of Martin Audio’s new Weatherised CDD, specifying a pair of CDD10-WR outside the building. These broadcast the sound of bells ringing from the church when it is in session.

Throughout the church, the speakers are set no higher than 4m above the ground and thanks to Martin Audio’s versatile wall brackets, which allow tilt and swivel between landscape and portrait modes, OBA has been able to optimise the sound for the congregation.

An inherently ‘live’ building loses much of its reverberation, with the carpets laid for the celebrants and absorption by the large number of worshippers who flock here. Inside, they are also treated to a dynamic visual experience, with two 65” UHD screens either side of the altar, along with a pair of 32” support screens (in addition to the 50” hall screen).

Provision of a Mackie DL1608 supporting wifi devices makes operation intuitive, and allows mixing to take place from anywhere in the church, zoned through the aux input on the mixer. In fact it is an EQ’d and compressed aux output from the mixer into a dedicated amplifier channel that activates the two external CDD10-WR cabs, allowing the bells to sound.

According to Kavanagh the faculty is delighted with the Martin Audio sound quality, whether reinforcing live music, spoken word — or simply listening to those bells peeling out down the street.