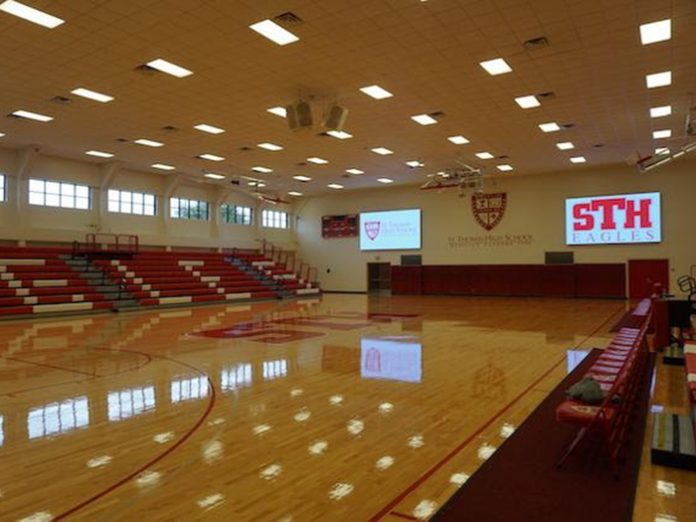 More than a century old, St. Thomas High School enjoys a gorgeous campus on prime Houston real estate. The Catholic institution’s current building dates to 2002 and includes a gymnasium with a surprising history: the gym originally was an aircraft hanger for B29 bombers, located 110 miles north of campus, until it was donated by an alumnus, moved to St. Thomas, and reassembled.

The gym’s sound system has been through changes over the years, too, culminating in a new Dante-enabled system designed and installed by Houston multimedia systems-integration firm Touch Thirty-Three. The current system features two Renkus-Heinz loudspeaker clusters managed by a Symetrix Prism 16×16 DSP, which works very well, but it didn’t all come together at once.

“This installation started out very piecemeal,” recalled Touch Thirty-Three owner and principal design consultant Bruce Coffman. “They had a terrible-sounding system here and asked us to see if we could do something to improve it. The first thing we did was to install a new AMX control system, which dramatically improved how they were able to use the old sound system. Once we made it easier to use, they recognized the limitations of the system’s sound quality.”

As a result, about three years later, St. Thomas asked Touch Thirty Three for a more extensive upgrade to the gymnasium sound system. Because it’s the largest indoor gathering space on campus, the room periodically doubles as a sanctuary for masses, hosting up to 1,200 worshippers. “For mass, they put carpet over the entire floor, they bring in folding chairs, and they have a stage that goes at the far end of the room,” Bruce reported. “It’s completely different than when the room is used for sports. Because of the room’s dual-use, we couldn’t put in a typical sound cluster over centre court, so we put a big Renkus-Heinz T15-series Reference Point Array cluster at one end of the room.”

To feed the array, Touch Thirty Three installed a Dante network, centred around the Symetrix Prism 16×16 DSP. The Prism is equipped with a Symetrix xIn 12 12-channel analogue input expander, which accommodates the school’s existing 12-channel audio snake. With this rig, noted Bruce, “If they want to have a choir or a musical ensemble, they’ve already got the wiring, and it all shows up on faders on the AMX control system.”

The Renkus-Heinz T15-series array consists of four self-powered full-range point-source loudspeakers, each with a 15-inch woofer and a Complex Conic horn. “The cluster acts like one big speaker,” Bruce observed. “You can walk the floor, and you don’t hear any seams between coverage.” Bruce also specified two Renkus-Heinz two-way, 8-inch down fills to cover the “money seats” at the edge of the main pattern from the main cluster.

The single array, managed by the Symetrix Prism 16×16, sounded great and delivered good coverage but challenges remained. During basketball and volleyball games, it seemed odd to have the sound coming from the far end of the room. And during mass, when less experienced users turned the system up to reach the back of the room, they encountered feedback problems with wireless lavalier mics and the PZM mic atop the altar. So recently, when the school was doing a major renovation, Touch Thirty-Three addressed the directionality and feedback issues by installing a second, identical Renkus-Heinz T15-series array over centre court. The central array operates as the main system for sports events and serves as a delay fill for the centre and back of the room during mass, enabling the front cluster to operate at a lower volume and averting feedback.

Adding the second array and unifying the system went smoothly, thanks in large part to the Symetrix Prism and SymNet Designer software. “The great part about Symetrix equipment, along with the AMX controller, is that we were able to give the school anything they wanted,” Bruce offered. “All we had to do to expand the system was reprogram the Prism, and Symetrix’ phenomenal support staff helped us do some of that reprogramming work. SymNet lets us tailor how the components operate together to turn it into a single, seamless system.”

Bruce especially likes the combination of Symetrix and Renkus-Heinz products. “Symetrix processors and Renkus-Heinz speakers are a great match for each other,” he asserted. “The Renkus-Heinz clusters sounded great just the way they came from the factory, so I could use SymNet to tweak the system’s functionality, rather than its sound quality. The Symetrix Prism processor determines how the components work together, depending on how the room is set up and the purpose for which it’s being used.”

One of Touch Thirty-Three’s strengths as a company noted Bruce, is making a sophisticated system, such as the one in St. Thomas High School’s gymnasium, easy to operate for the end-user. “Symetrix allows me as a system designer to do some pretty amazing stuff in the background to make the system simpler for a user,” he posited. “Whatever the school wants to do, whether for sports or mass, the Symetrix processor, Renkus-Heinz loudspeakers, and AMX controller allow them to do it seamlessly, and someone with a minimal amount of experience can get a very consistent good sound. This works very well for St. Thomas High School.”