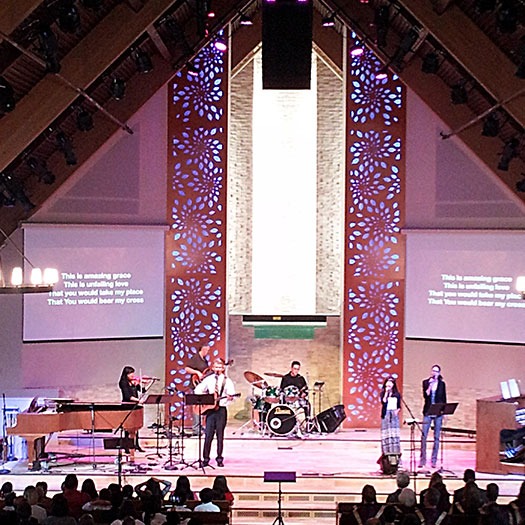 All churches serve a higher spiritual mission, and most houses of worship also strive to remain relevant to the people in their immediate communities. For the Sunnyvale Seventh-day Adventist Church, which is located less than a 15-minute drive from the world headquarters of Apple, Google, Intel, Cisco and a host of other Silicon Valley powerhouses, this commitment helped prompt a technological upgrade that included the installation of LED fixtures from Chauvet Professional.

“Being located in Silicon Valley, the church serves people who are surrounded by technology every day,” said Matt Gordon, of Legend Theatrical, which managed the lighting and video upgrades of the remodeling project. “The new lighting system and other enhancements have given the church a more contemporary look, which connects to worshippers.”

Sunnyvale Seventh-day Adventist’s technical director Greg Richmond described the changes made to the church’s lighting system. “We had a few fixed, incandescent ‘hardware store’ style flood lights controlled by on/off relays,” he said. “Now we have much more energy-efficient, DMX-controlled multicolor LED lights, some of which have remote positioning and focus to allow spot lighting of features on the church platform that change with the season and during special events.”

In addition to audio, video and lighting, the remodeling project features a reconfigured platform and screen walls, reupholstered pews, new carpeting, stonework and glass. Many of the new design elements in the church are tied together by the upgraded lighting system.

“The lighting not only illuminates the Presenters, Musicians and drama team members, but also the columns and stonewalls,” said Greg. “The new stone veneer is three dimensional, so we’re able to create a nice pattern of shadows and colour images when we uplight it with the COLORado Battens or hit it with side light from the COLORdash pars.”

Prior to the renovation, the church had one large screen in the centre of its sanctuary that wound up distracting from the visual height of the area. Now the church has screens on either side of the sanctuary to draw the eyes of worshippers to the focal point of the services.  The connection between worshippers and services is enhanced further by the flat even light field of the Ovation ellipsoidal fixtures, which are mounted on the ceiling at various points throughout the room.

Greg also plans to take advantage of the Rogue R1 Spot’s two gobo wheels and 16.5° beam angle to create custom looks for the church. “We’ll also be experimenting with various gobo messages and graphics,” he said.  “Our goal is to use proper lighting in conjunction with the various styles of worship presentations and music to increase the impact of the Gospel messages being shared.”

Based on the aesthetic balance achieved with the new lighting system, this goal has been achieved in beautiful fashion.