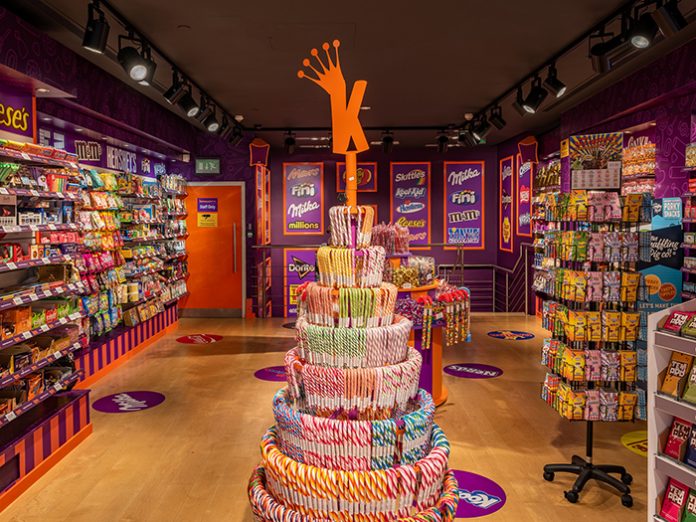 For a company better known for supplying club sound systems around the world, there has been a recent ‘sugar coated’ opportunity for Void Acoustics to make an appearance on a high street near you.

Kingdom of Sweets is a multiple retail sweet-shop operation in key cities around the UK in addition to a number of flagship stores in major European cities.

This unusual project for Void highlights a number of firsts for the company. It is the first time Void Acoustics has supplied Kingdom of Sweets with their quartet of new shop locations in Bath, Windsor, Leeds and London’s high-end Knightsbridge shopping district.

Alan Smith, Business Development Manager for AT&C takes up the story. “We’ve been aware of Void Acoustics for many years, and when we got the brief from our client, it was evident that this was a quirky and demanding project which had Void written all over it!” he recalls. “We had been asked to specify a sound system to ‘up the ante’ on the customers’ audio experience, whilst providing a bespoke design complementing the eye-catching and colourful presentation synonymous with all Kingdom of Sweets stores. Our client specifically asked for a clean sounding, bass-heavy system – with the audio reflecting the visually flamboyant experience for customers coming in to shop for their sugary goodies. It was clear that Void were the audio manufacturer to work with.”

With high streets springing back to normality, Kingdom of Sweets outlets have opened around the UK with bespoke manufactured and custom coloured Void Acoustics speakers to reflect the vibrant orange and purple pantones of the Kingdom of Sweets brand. “Alongside the unique design of Void speakers, the fact the fibreglass speakers could be custom sprayed in the corporate colours was a major selling point” continues Alan.

Void’s Head of Sales, Mike Newman was excited to be involved in the project. “This type of project couldn’t be more ‘polar opposite’ when considering the projects Void Acoustics are well known for. The Void brand is more associated with clubs and dance venues than sweet shops and so it was great to have a completely different project to introduce our systems into” he grins. “And actually, the key elements remain the same – with attention-to-design-detail, an exceptional audio quality and exacting installation values at the core of the project.”

A series of the sleek looking Air 8s, supported by Venu 212 V2 bass enclosures and the ever-reliable Bias Q2 amp were installed into the Bath store. Whilst in the smaller store in Berkshire the futuristic Indigo 6s were installed alongside the Cirrus 6.1 ceiling loudspeakers and the smaller bass Venue 112 V2 unit accompanied by the Bias Q1 amp. In Leeds, the shop’s audio system features Venu 10s and Venu 212 V2s. Meanwhile the largest London store opened with the two-floor shop being served by a number of the iconic Airten V3s and Air 8s alongside Venu 212 V2s to supply the desired bass impact. Finished off with amplification from the Bias Q2 amp and newly released WM Touch Control Panel allowing easy operation for the store staff.

As a result of the seamless collaboration between AT&C and the team at Void on these installs, there are already other projects in the pipeline. “I only have positive things to say about the Void range – which is fantastic; and the good-natured assistance of the team at Void” confirms Alan. “Mike Newman has patiently supported me as I get to grips with the capabilities and potential applications of the Void speaker and amp range. We are now in the process of fitting out a sports bar with the Venu range, and a cocktail bar with the Cyclone range. So it’s full steam ahead!”

A spokesperson for Kingdom of Sweets confirmed their delight at the outcome of the installations and the positive reaction from their customers. “The whole experience working with AT&C and Void Acoustics has been really positive throughout. The Void systems perfectly reflect our brand values of fun and high energy. Not only do the speakers look great but the performance is exceptional and have in fact way exceeded our expectations.”

“We were delighted to have partnered with AT&C on this new type of project for us, and given the incredibly positive reaction from the client, and the way the project was managed, I know we have started to build a great relationship with Alan and his team” concludes Mike.