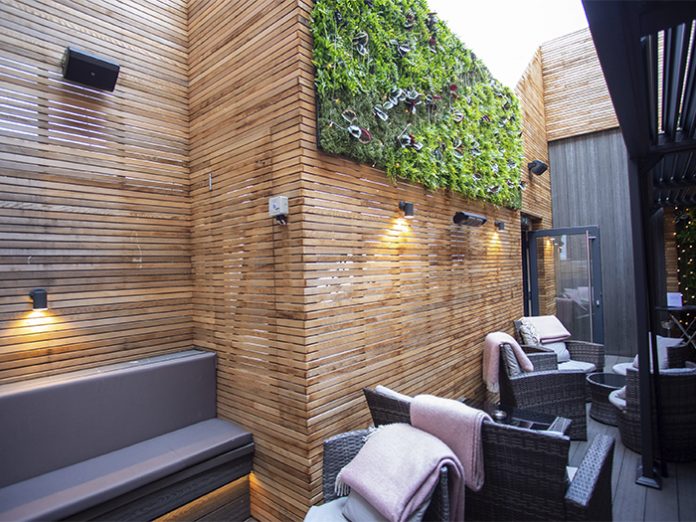 Recently established lifestyle restaurant and bar, Socialite has worked alongside Flipside Soundsystem to create an enticing musical atmosphere in the heart of Brighton’s Lanes. The building, which used to be a Cath Kidston store, benefits from an open concept layout with; a lavish cocktail bar, a private dining area, a generous performance space and topped off with a casual roof terrace. With the aim of being an all-in-one bar, the space was in need of an AV system that could occasionally simmer into the background, allowing conversation to flow, while also being able to support live music and DJ events.

“After having a brief look around the site, working out its functionality and what the concept was – I knew, pretty much from the get-go, that musicality was the main focus of this place,” recalls Flipside Managing Director, James Cooper. “From then, we knew we wanted to offer good quality audio that could perform at a high level and that could also be used in as many zones as possible, while still leaving room for expansion.”

Co-Founders of Socialite, Adam Elliott and Barry Vera had a vision for the venue to be all-encompassing; a place for guests to spend entire evenings from initial cocktails to after dinner entertainment. “People used to go to a restaurant, have their three-course meal and then move on somewhere else for their drinks and music,” explains Vera. “But previously, I’ve experienced lifestyle restaurants that are all-in-one. You’re there for more than just the food, you’re there for a full evening experience and I think the music is at the essence of that – whether it’s in the background, or at a live event, it draws people in and makes them want to stay.”

“We were pretty fortunate to come across Flipside,” adds Elliott. “I felt like we were all on the same wavelength. We basically needed a reasonable fool-proof system – one that we didn’t need to think about upgrading for a long time and could understand and control quite easily. We also wanted a system that could capture the music in a way that felt like you were still hearing it without being overwrought with high bass or tinny speakers.”

After reviewing several different design options, Flipside opted for a system based around Bosch’s Dynacord and Electro-Voice brands. Relying on the EVID-S series surface mount speakers, 8-inch and 5-inch versions were wall-mounted around the venue, with a 4-inch for the downstairs bar and IP-rated versions installed in the rooftop terrace. “The S-series speakers were the clincher of the whole set up,” Cooper states. “They sound really good, they can go pretty loud and they’re a diverse enough range to be able to go for all the different areas.”

Working towards a full Bosch solution route, the restaurant also had a Dynacord MXE5 Matrix Mix Engine installed using a TPC-1 wall panel for simple control and powered by a pair of Dynacord C-series amplifiers. “We really wanted to try the MXE5 – it’s really powerful and yet really simple to understand and easy to use. There’s plenty of control, lots of nice little touches woven into it and the TPC-1 is a brilliant wall panel – it looks great in that higher end hospitality setting. I always find myself falling back on the Dynacord C-series amplifiers as well, they are just really good value – a reliable, solid, decent sounding amp.”

The rest of the downstairs area included EVID speakers installed around the seating areas and while a restaurant wouldn’t usually require subwoofers, Flipside felt it necessary to give the DJ nights as full range as possible and installed a pair of Zx-1 subs. “You could arguably go without subwoofers and just put a bit more bass through the 8-inch EVID speakers,” Cooper says, “but personally, I think that sounds awful and no one wants a booming box up on the wall. By taking the bottom end out of the tops and putting it through some subs, the soundscape of the room is less intrusive and gives you more of a surround sound feeling which is a lot better for this kind of space.”

One of the main briefs for Flipside was for guests to be able to hold a conversation despite music being played all around them. For the upstairs ‘L’ shaped area, the speakers needed to work amongst the furniture layout of banquette seating with tables placed sporadically. “With the seating being along the wall, we simply decided to wall-mount everything because the sound ends up going over-head and more into the centre of the room,” Cooper explains. “I think it actually would’ve been trickier if there were tables in the middle in the room – this way, the music can be appreciated, and you can still be involved in a discussion.”

The final AV set up has left Socialite in a position to host events both intimate and large-scale, as Cooper is satisfied the equipment will provide all-round support. “Socialite needed something unique to them and after a few final tweaks and tests and it sounded really good,” he concludes, “It’s given me a lot of confidence in all of the equipment that we used – particularly with the EVID speakers. The reports back to us have been really encouraging, so much so, that we’re currently quoting them a new system design for another venue.”