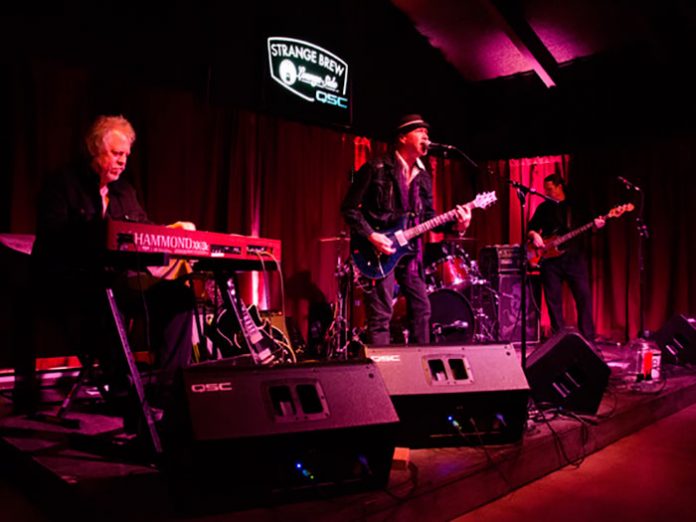 In a town known for its all-encompassing music scene and more than 250 live sound venues, Strange Brew, Lounge Side distinguishes itself with an eclectic calendar of acts ranging from local favourites to renowned artists like Patty Griffin, Christopher Cross, and the Glenn Miller Orchestra. In recent years, Strange Brew has also scored big at the Austin Music Awards, an event that kicks off the South by Southwest Music Festival here every year. With a dozen AMA awards under its belt including Best Live Music Venue, Best Acoustic Venue, Best Venue to Play, and this year’s award for Best Club Sound, Strange Brew recently added a number of K Series and KW Series loudspeakers to its all-QSC sound system.

An insurance office in 2009, the building occupied by Strange Brew today was transformed by founder Scott Ward, a man with a background in construction who helped imbue the place with its hand-hewn, uniquely South Austin vibe. As part of the property’s evolution, the Strange Brew Lounge Side opened four years ago under the same roof as the coffee shop.

“We’ve been an all-QSC venue everywhere since we opened, including outside on our patios and in the coffee house. Our guest artists—and it seems like everyone else too—have always raved about our sound right from when we first opened the doors,” said Scott. “Our recent upgrade actually represents the second incarnation of QSC sound system we’ve used on the Lounge Side.”

The newly upgraded house sound system on the Strange Brew, Lounge Side features a pair of KW Series loudspeakers flown left and right above the stage. A centre fill hang residing between these two elements incorporates another single KW153 buttressed on each side by a K8 loudspeaker. Two KW181 subs extend the low frequency response of the rig, and as a final complement, a K10 loudspeaker is employed for sidefill. Stage monitors on the Lounge Side include four KW122s and a single KW152 for the drummer. Four K12s also stand at the ready, set to be employed on an as needed basis.

“When we installed the original lounge system,” Scott added, “I didn’t think there ever would be a way to improve it. The warmth of the sound was exceptional, it did everything we wanted it to for any act night-after night for more than 5,000 shows without any problems. Then one day a group of engineers from QSC visited and said that it could indeed be even better. I have to admit, I didn’t believe them at first.”

Following a careful analysis of the room and the existing components, the QSC team created a new audio blueprint that increased the number of enclosures and drew a map of wider coverage bringing an even template of sound to every inch of the space. Headroom increased as well, with clean, transparent maximum peak levels of 134 dB becoming a reality. Along with improved dynamic range, the sound stopped Scott in his tracks when he heard it.

“I really didn’t believe my ears, but the QSC engineers were right, and our great system got even better,” he added. “We had a really big show the first night the loudspeakers were up-and-running. I walked the room and stopped at different spots, and the sound was phenomenal. The upgrade actually took our original QSC system there to another level in terms of fidelity, clarity, and coverage. We worked hard to get an AMA for Best Club Sound, and we couldn’t have done it without QSC.”