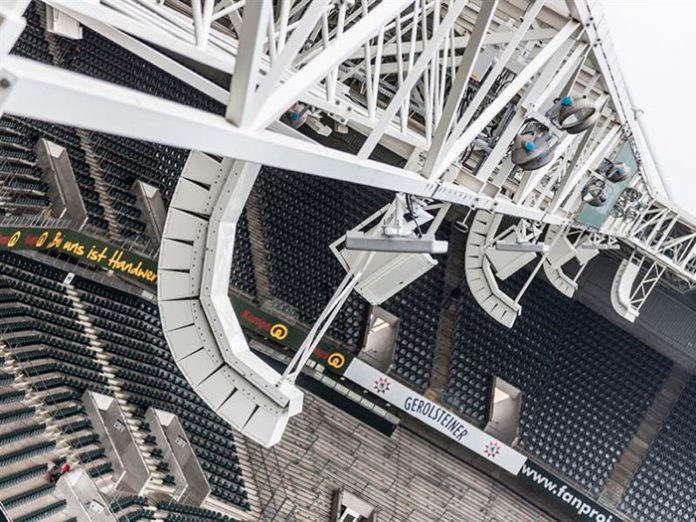 RCF has recently concluded another notable audio project in one of Europe’s main stadiums, Germany’s Borussia Park in Mönchengladbach.

Despite having been built between 2002 and 2004, until 2015 the BMG was not equipped with a sound system up to the requirements of a modern football stadium, so the project marks an important advancement in the venue’s technology.

Requirements specified in the competitive tender were direct SPL of 101 3 dB on 99% of the audience seats, and a minimum STI of 0.51 0.02 in the fully occupied stadium. RCF technicians report the system as having an average STI of 0.53 and SPL of 107, with uniform distribution on all seats. Mr. Bernd Muckl, Head of Engineering at the Borussia Park, asserted that the results at the stadium marked a brilliant achievement and a significant upgrade in the stadium’s technological equipment.

As stated by the technical staff of RCF’s German division, the concern with weather conditions played a significant role in the choice and configuration of the system. “The installation points are at the end of the roofs, leaving the system directly exposed to all weather conditions. There are no catwalks, so a passive system was preferred for reasons of maintenance simplicity,” they reported. Concerns with harsh weather and security have not only led to the choice of weatherproof passive line arrays, but also to several customisation requirements. In particular, all HL20 WP and HL2290 line arrays installed at Borussia Park were constructed from 21 mm plywood, equipped with fixed FRNC weatherproof cable and painted with a fire-resistant self-extinguishing coating. A test of the final equipment was made by the customer together with local authorities.

Perhaps the most impressive customised element of the BMG system is the tailor-made array design. Expo Engineering developed a unique cluster frame with mounting plates on both sides, in order to cope with the special climate challenges from weather and wind.

In the last few years RCF has increasingly been involved in the realisation of large projects for stadia and sports arena, such as Baku, Dortmund, Juventus and Konya Torku, just to name a few. The experience gained in customising audio systems with tailor-made features was one of the reasons for the choice of RCF by Wärtsilla Funa. Graner & Partner Engineers followed and confirmed the chosen RCF system from the initial planning to the choice of products and construction management.

The new audio system at Borussia Park was inaugurated during the Telekom Cup, a tournament with four Bundesliga teams held on 12 July last year. The Champions’ League and Bundesliga matches currently being played also enjoy the upgraded power and clarity of RCF’s sound.