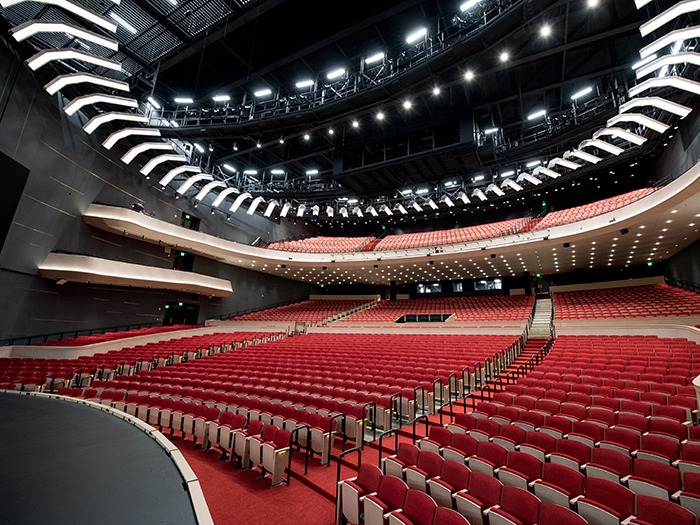 The project was both boldly ambitious and fiscally conservative. It was ambitious in that the $90 million facility would incorporate the latest technologies for acoustical and staging flexibility, allowing the venue to serve as a concert hall for symphony performances and opera, as well as an auditorium for spoken word events and a road house for touring shows from rock concerts to Broadway musicals. It was conservative, however, in that the cost was substantially less than what would be needed to build two separate venues.

“I knew from the outset that the economics would be driven by selling out touring shows, which is why we set 3,000 as our minimum capacity and designed our staging to accommodate tours well into the future,” stated Matt Brown, who as Managing Director of the Greensboro Coliseum Complex now also carries responsibility for the Tanger Center. “Yet following the demolition of the old War Memorial Auditorium, the Greensboro Symphony was in need of a new home. Our goal was to provide an optimum environment for both types of performances without compromising either.”

He continued: “The audio systems in the venue needed to have the capability and flexibility to deliver state-of-the-art sound quality for a wide variety of events. The Tanger Center will host everything from symphony classical music performances to rock concerts to lectures to Broadway to family shows and the sound systems must be able to deliver the highest level of performance for all those different types of events.”

The challenge was handed to the acoustical consultants for the project, Arup of New York, with acoustical design at various stages guided by Matthew Mahon, Christopher Darland and Ed Arenius. Arup’s recommendation was to design the hall with relatively dry physical acoustics to accommodate spoken word and amplified music with electroacoustic enhancement added as required for most other musical events.

The Greensboro Symphony Youth Orchestra took the stage at #TangerCenter today! Thank you to all the wonderful musicians! Here is a short clip of the youth symphony’s fall repertoire. pic.twitter.com/DRk2mlm8wt

“The symphony would have preferred a 1,600-seat symphonic concert hall, but Guilford College’s Bryan Series and Broadway series were selling double that number,” recalled Matt, “so we needed to acoustically accommodate both. That led to a thorough education on electroacoustic technology culminating in the selection of a Constellation system.”

Also involved early in the process was Cliff Miller, president of SE Systems, eventually selected as the AV systems integrator. Although brought on board primarily to consult on road house requirements, Cliff also helped connect key people in Greensboro to the Meyer Sound team in Berkeley.

“To a great extent, the choice of Constellation was driven by a push from Dmitry Sitkovetsky, the Music Director of the symphony,” recalled Cliff. “He visited Meyer Sound in Berkeley to hear Constellation early on when other systems were still under consideration. He also consulted with other conductors familiar with the technology before tilting strongly toward Constellation.”

Not only did Sitkovetsky hear Constellation in the audience at Meyer Sound’s Pearson Theatre, he also sat in with a string quartet, playing his Stradivarius violin. In addition, he had previously noted the acoustical improvements at Moscow’s Svetlanov Hall following installation of Constellation there. Also traveling to Berkeley to audition Constellation was Tom Philion, president and CEO of ArtsGreensboro.

Cliff Miller, also explained that the level of cooperation between the key participants in the project was considerably higher than usual, something he ascribes to the work his company has done with the city of Greensboro over the years – that relationship goes back to a sound system they installed in its Coliseum venue in 1996 – and the work SE Systems did with Parsons Electric (now Archkey Technologies) on Charlotte’s Bank of America Stadium in 2014. “Being familiar with each other definitely helped, but so does the fact that we’d have regular Monday and monthly meetings, often with all on site,” he said. “And the fact that everyone, including ARUP, was open to making changes.” Sam Trexler, SE Systems’ project manager for this job, added: “Everyone was willing to look at ideas that went beyond just the conventional ones.”

That flexibility helped with the installation of SE Systems first Meyer Sound Labs Constellation electro-acoustical system, especially since the Tanger Center was also the largest Constellation installation in the U.S. to date. While the Meyer Sound system is fully discrete from the house PA system – its main overlap that it shares with the d&b sound system is two of the five systems-core racks located on the venue’s catwalk – its installation required a high degree of interaction with certain vendors. For instance, Sam explained, the absorptive fabric used on the side walls as acoustical treatment specified by ARUP and installed by a local provider varies in thickness, between two and 12-inches, in different places in the auditorium. Those variances could impact the effectiveness of some of the 226 loudspeakers and 57 microphones embedded in the auditorium’s walls and ceiling that are used to alter the room’s acoustical response. “ARUP did the acoustical modelling of the room, and we were working from Meyer Sound’s Constellation system design, which they did from the architectural drawings,” he said. “We needed to make sure the loudspeakers and microphones were placed consistent with where Meyer said they were supposed to be, but also that somewhere underneath there wasn’t an overlap seam in the wall covering.”

Cliff added that they needed to have the same level of cooperation and coordination with the drywall contractors, who had to build recessed boxes around approximately 90 of the wall-installed loudspeakers. In other cases, a support beam might be discovered where a loudspeaker was intended to be placed, necessitating the beam’s repositioning. “The important thing for the Constellation installation was to keep the loudspeaker and microphone groups’ distribution plan intact,” he said.

Small changes were made to the system design by Meyer Sound technicians on site; for instance, one designer was able to reduce some of the amount of the cabling around the balcony areas by tweaking the conduit routing. Nonetheless, the Constellation system’s wiring still needed more than double the 31,000 ft of Belden and Windy City cabling the design originally called for. “That’s not surprising in a building this densely designed,” said Sam. “It might take 250 ft to get from point A to point B while on the drawings is says 100 ft.”