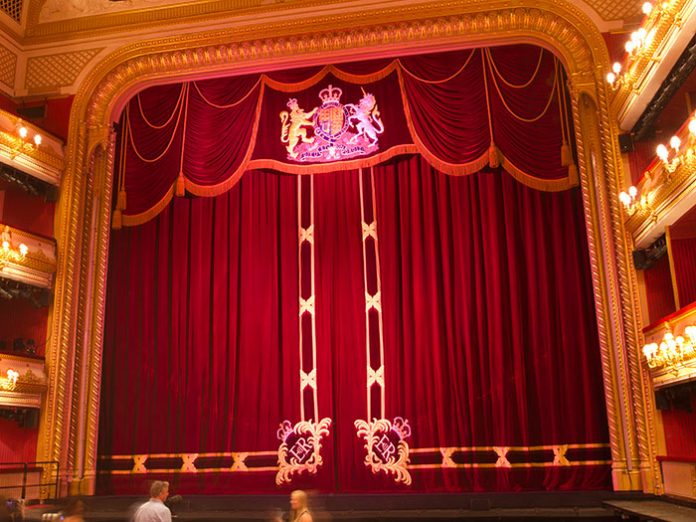 The installation is the result of an out of the blue phone call with an invitation to the opera in Verona for the Royal Opera House’s Head of Sound, Steve Zissler.

“I was asked if there was anyone I knew that I’d like to take to Italy to see the opera and listen to some sound systems,” said Jamie Gosney from Stage Electrics, who designed the system at the Royal Opera House. “I hadn’t been at Stage Electrics very long, I didn’t really know anyone then and I didn’t even know the K-array products that well. But Dave Wooster, [now part of 2B Heard, K-array’s new UK distributor], had already said that the K-array products were perfect for opera.”

Not long after, Stage Electrics took a KR402 system to the Covent Garden theatre for Steve to hear.

“They thought it was just the sort of system they’d been looking for,” said Jamie. “We didn’t know what results we’d get in the venue, but with just that one portable system, we could hear it wherever we went. It was pretty amazing.”

After discussions with Steve and his team, Jamie and Dave put a series of designs together. “We’d send them to Steve and he’d say, ‘Ah, right, but can we do this?’,” Jamie recalled. “And we redid it until we got it to the point that everyone was completely happy with.“

The first opportunity to put the system through its paces came when Anthony [of Anthony and the Johnsons] played the Royal Opera House with a small orchestra.

“Anthony’s engineer, Kevin Pruce, saw at the K-array and I noticed a look cross his face,” said Jamie. “I knew he was worrying about it, so I said, ‘why don’t you just put some music on that you know and walk round the building?”

Kevin walked the entire venue, along with system tech Mark Isbister, and decided they were more than happy to use it. “I knew then that it was going to work,” said Jamie. “They did the gig that evening and it was just mind-blowing. And he was running it really loud, which proved that the K-array system can handle anything.”

It was only a short while after that that Steve put the order in for the final system, which comprises the aforementioned KP102, precisely colour matched to the gold of the proscenium arch – “everyone said they looked pink when they were first done,” said Steve, “but in actual fact, they’re a perfect match” – with 24 KKS50 Compact Sub-Bass in six clusters of four subs, three clusters each side, eight KK102 front fills built into the new thrust stage, two KA84 four channel amplifiers powering the main proscenium L/R system, a KA84 four channel amplifier powering all six sub bass clusters and a further KA24 four channel amplifier powering the front fills.

“One of the truly amazing performance aspects of the system is the image across the room,” explained Dave. “From sitting in the very first box, round to dead centre, the stereo image is impeccable. Even if you are sitting in the first box house left, you experience a lower level of the left array due to proximity, but you also receive a strong level of house right because the distance allows the system to couple more elements. Combined with the 110 degree horizontal spread, left and right are well balanced.”

“The other benefit of this system is that due to the amount of drivers in the column you are always on axis to the system. This has a dramatic effect on the requirement for under balcony delays and the real experience of sound coming from the stage and not above your head.

“The overall performance of the system, totalling eight KP102s per side, each providing 720W from 12 drivers in each section, suddenly starts to mount up. With 96 3.15-inch drivers providing around 5,760W, a dispersion of seven degrees vertical and 100 degrees horizontal and weighing in at 96kg, this becomes as system like no other.”

“Mixing on a system like this does require a small amount of mind over matter if you constantly look at what’s in from of you, as opposed to what you’re hearing. But if you stop looking and start listening your mind will easily remember what matters; a system that has a dynamic and fast response to what it receives and accuracy in what the engineer expects and wants it to do.

“We do the a major television production here every year and I was very mindful of the fact that it’s Stewart Chaney of Plus 4 Audio gig – we’re just the venue facilitating that. I knew I had to phone him and let him know we’d changed the system to K-array and I was very keen for him to listen to it. It just so happened that it tied with a K-array demo that we were both going to and he was really complimentary about the system. In fact, he said he didn’t need to use anything else, because it covers the boxes at the sides of the auditorium beautifully as they’ve got such a wide dispersion. In actual fact, for what they needed them for they were absolutely perfect.”

“If you look back at previous shows, they have this massive lamp and shine it up at the proscenium. We had covered the previous system to match in with it and you could see the loudspeakers. This year, they still had the lamp shining up, but you didn’t even know the speakers were there – and Stewart was really complimentary,” Dave concluded.