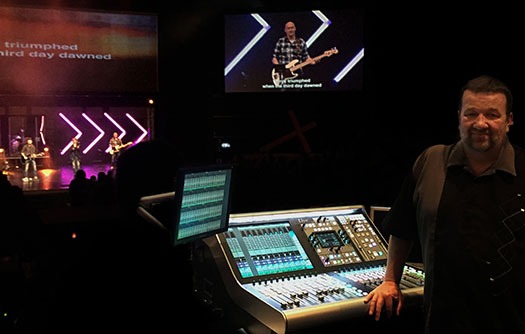 Founded in a small basement in 1970, Northside has gone from strength to strength, now serving over 5000 people each weekend. Ted W. Roberts, Administrator at the church, provides oversight of technical infrastructure, drawing on his own extensive, high-end live sound and touring experience. Most recently, Ted helped specify the new console: “It’s very different when you work with only one or two key department heads and then everybody else is a volunteer,” said Ted. “They have to be set up for success. If you don’t provide the right tools for the job, the volunteers can’t enjoy it because they sense imminent failure all the time.”

When Ted came to Northside five years ago it already had a digital console, but that was being underused, mostly because of the user interface: “They had barely scratched the surface of the console,” he explained. “There wasn’t anyone who used the console effectively because it got dicey so quickly. Everybody quit touching it – only using it at the surface level.”

It was obvious that change was required. “The console had aged,” noted Ted. “It was time for us to find the next generation.”

From the start of the decision making process it was important that the church, and the volunteers, were on-board with the plan: “For a church, it’s a big step. When you look at a high-end console you have to look at it as an investment – it impacts everything that we do in our primary mission, every week. It has to be reliable, it has to be modular enough to grow into the future with us, and it has to produce the end results that we’re looking for.”

Support too was an important aspect of the console choice: “There are certain products that we would eliminate immediately,” said Ted. “Because there’s no way to feel like we have the level of support that we want – both at the local and at the manufacturer level. We have a fantastic relationship with our local vendor, Acoustical Audio Designs and we wanted to ensure that whatever desk we were going to settle on it had to be something that they could support, and also guarantee that the manufacturer was going to be solid and supportive.”

During the decision making process, Roberts ran a shoot-out test for sound quality in the Church’s auditorium. “It was night and day,” he said. “It was one of those great confirmation moments for us. The whole team was standing there and just went ‘Wow’!”

Typically on a normal Northside service there is a complete live music mix plus spoken word to deal with. The L300 takes care of both FOH, and the monitor feeds to an Aviom in-ear monitoring system. “There are 56 channels – give or take – in constant use over a weekend,” said Ted. “As well as that, we have to deal with specialty, bigger production needs like the Christmas events… with large choirs, and whatever else our senior pastor can dream of.

“That’s a great thing about the desk – it’s easy to be flexible. The volunteers have just loved it because they’ve found that it is intuitive. Once you understand the layout and the flow it’s easy to move your way through what you want… The touch screen is awesome… Easy to understand. Everything is right where you would expect it to be when you’re looking for it.”

Moving forward, Northside Christian Church is looking at a new PA system to compliment the L300. “The console is everything we hoped it would be,” said Ted. “We’re growing what we can do because of all the functionality it provides us.”