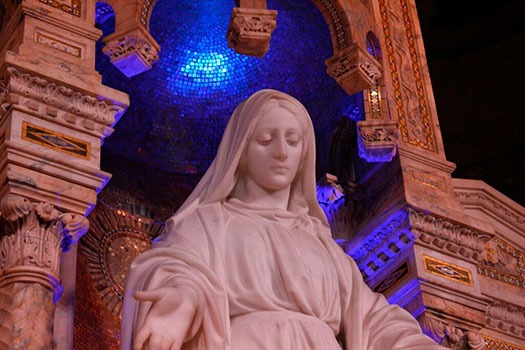 The Miraculous Medal Shrine has been inspiring the faithful since it was completed in 1927. Nestled in a domed gold leafed alcove and flanked by engaged marble columns and mosaic murals, the life-like sculpture radiates a sense of peace and spiritual renewal.
Recently, the transformative elements of the Shrine were enhanced even further with the addition of a vibrant lighting system anchored by Chauvet Professional fixtures that adds layers of depth to its surroundings and changes to reflect different times of the day.
Tyler Hoffman, the Owner and Principal Designer of Spire AVL created the new lighting system, using COLORado 1-Quad Tour pars, an Ovation C-640FC cyc light and Ovation E-190WW LED ellipsoidals, as well as three flood fixtures.  The new LED system replaced incandescent par fixtures and flood lights that were installed at the Shrine in the 1970s.
“Nick Gibboni, the Shrine’s director of operations, reached out to Spire AVL because he was looking for a company that worked with architectural lighting, themed/exhibit lighting, and theatrical lighting. He was referred to us by a Philadelphia-area architect,” said Tyler. ”What the church wanted to do was highlight the detailed mosaic artwork, gold leafing, marbled architecture, and life-like sculpture work.  The lighting fixtures they had in place at the time used inefficient lamps that were costly and needed to be replaced often.”
The LED system installed by Spire AVL did far more than bring a new level of cost-saving efficiency to the Shrine. It also added extraordinary dimensionality to the site and brought forth intricate details of the statue and its gold leafed surroundings in ways that couldn’t have been imagined when the Shrine opened nine decades ago.
As Tyler said: “There was little the old lighting did to accentuate the thousands of hours of artistic detailing that went into construction the Shrine to Mary.” The Spire AVL owner and his team rectified this shortcoming with a new design that layered light to draw people into the Shrine visually and spiritually.
“We layered the light by evenly front lighting the Shrine, by providing back lighting to the area immediately behind Mary, and by washing the ceiling of the Shrine with the Ovation C-640FC cyc fixture,” said Tyler. “The Ovation cyc was mounted behind the Mary sculpture on the back wall so it’s entirely hidden from view, yet it offers a clear sightline to the ceiling of the Shrine. This fixture highlights the intricate gold leafing on the ceiling and the figures on the ceiling, which adds an extra level of layering to the scene.”
As he did with the Ovation cyc light, Tyler took pains to position fixtures in ways that kept them from view. For example, he mounted ten COLORado fixtures on the back side of the marble pillars so they would be unseen from any sightline when outside of the Shrine. The three flood fixtures were positioned out of sight behind the Mary statue to highlight the gold leaf, while the two Ovation ellipsoidals were mounted on the high ceiling above the nave of the Cathedral to provide frontlight on the pulpit during sermons.
Although the fixtures are largely out of sight, they certainly influence the sights that visitors see at the Shrine. “Not only does the layout of the fixtures play an important role in creating this layered approach,” said Tyler, “but the programming and scene-by-scene design also uses gradients of light to pull focus to critical parts of the Shrine.”
As an example of his use of light gradients, Tyler points to the slight colour temperature variation between the top of the Mary sculpture and the bottom. “The subtle gradient adds an extra layer within the front layer of light,” he explained. “Then, immediately behind Mary, a cool blue colour is used to contrast the warm Mary and to help her back drop recede and add depth. Behind and above the Mary sculpture, the ceiling is then lit in a warm golden tone to both highlight the gold leafing and to ‘advance’ the ceiling, making it part of the scene. Basic colour theory in lighting design shows us that ‘warm advances, and cool recedes.’ By implementing this technique, lighting designers can determine how architecture is perceived by the human eye and mind.”
On either side of the room that houses the Miraculous Medal Shrine are large windows that allow copious amounts of sunlight into the area. Tyler accounts for the variation in ambient light by adjusting his LED system by time of day. “We are using a programmed lighting server that is synced with the astronomical clock and has been given the correct latitude and longitude,” he said. “It knows when the sun is rising and setting each day.  We are using an Interactive Technologies CueServer to make this happen.”
Creating this technologically advanced lighting system to fit within a church’s budget was not without its challenges. They were challenges, however, that Tyler welcomed meeting.
“Fitting a budget and maintaining artistic integrity was the largest challenge of the project,” he said. “Creating art with technology is not always the least expensive practice, but we were able to pull it off by limiting ourselves to a quantity of fixtures which allowed us to keep independent control of each area/zone on the Shrine. Satisfying our artistic endeavors and vision for each project is possible as long as we can reasonably explain a baseline of requirement and its end purpose to the client. Once they see our vision and passion, we are able to start having an open dialogue that inevitably results in a successful partnership and project.”