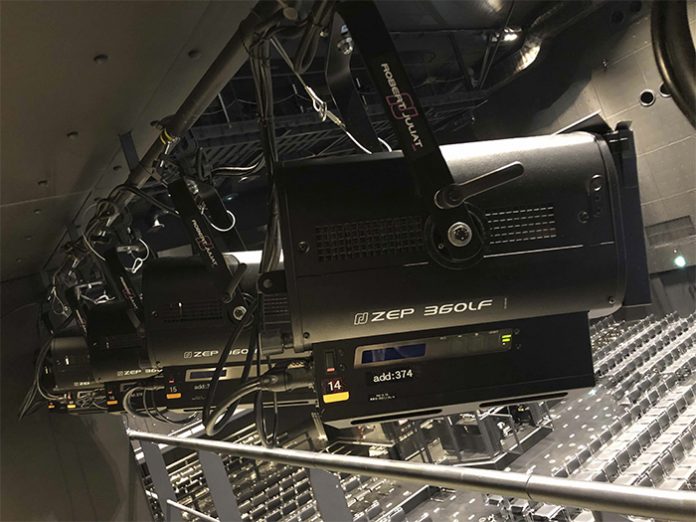 The latest project, supplied and installed by Sogo Butai, was for the 2900+ capacity Zepp Haneda in Tokyo and consists of a full complement of LED fixtures across the whole range of Robert Juliat’s LED portfolio: profile, single lens, followspots and cyclorama lights.

Sogo Butai lighting designer, Yukiteru Hayashi, carefully chose the comprehensive selection of LED fixtures to include 24 Dalis 860 cyclorama lights, 6 Tibo 533CW 115W Cool White and 4 ZEP 664SX2 300W profiles, 28 Warm White ZEP 360LF2 300W and 10 Cool White ZEP 360LF2 300W Fresnels, alongside 6 Oz 600W LED followspots. Four of the Oz followspots are sited in front-of-house positions and 2 in side positions. The profiles are rigged to a movable batten as ready-to-be-used fixures and stored in the stage right wing. The Warm White ZEP360LF2 Fresnels are rigged in side positions, 12 either side of the auditorium, and the Cool White ZEP360LF2 Fresnels are all rigged on the first downstage truss.

A subsidiary of Sony Music Entertainment (Japan), Zepp concert halls are dynamic, busy venues which are spread across all areas of Japan and beyond. The venues play host to many international tours and Japanese musicians and are also popular locations for corporate events and conventions.

With such a diversity of uses, the versatility and economy offered by LED fixtures and the quality of Robert Juliat products in particular was extremely important to this busy venue. “We’ve been using RJ fixtures for the other Zepp concert halls, so it was a natural choice for this venue as well,” said Hayashi. “This was a good opportunity for us to purchase only LED fixtures. We hope this will be a good model for other venues.”

Hayashi first specified Robert Juliat followspots in 2013 when he selected 4 Victor units for Zepp Namba and has been returning to the French brand ever since, choosing this time to go with Oz as an LED option. “I was worried at first that Oz would be hard to use for the operators who are used to other followspots, but Oz is so well-calculated ergonomically that the operators could handle them very easily. I suppose this is why Oz is so popular throughout the country. Besides, thanks to the LED source, there’s no need to change the light bulbs which saves time and energy, so we are glad to have Oz and Dalis, and all of the LED fixtures, for economic and ecological reasons too.”

Very familiar with the high quality of light produced by Dalis, Hayashi specified the award-winning cyclorama lights for Zepp Haneda, and he is delighted with his choice once again. “The brilliant, vivid colours of Dalis illuminated the stage with such beauty, and it was very moving to see the obvious quality of the lights,” stated Hayashi. “The operators told me how they loved the fact that Dalis fixtures colour the stage so smoothly, equally and beautifully with their light so vivid and aesthetically intense. I will definitely choose Dalis if there’s another occasion to purchase new fixtures.”

Sogo Butai provides installation design for theatres, concert halls, and live houses, including sales and delivery of equipment. It prides itself on servicing every demand with the best equipment available, selected with the confidence of many years of experience and skill.