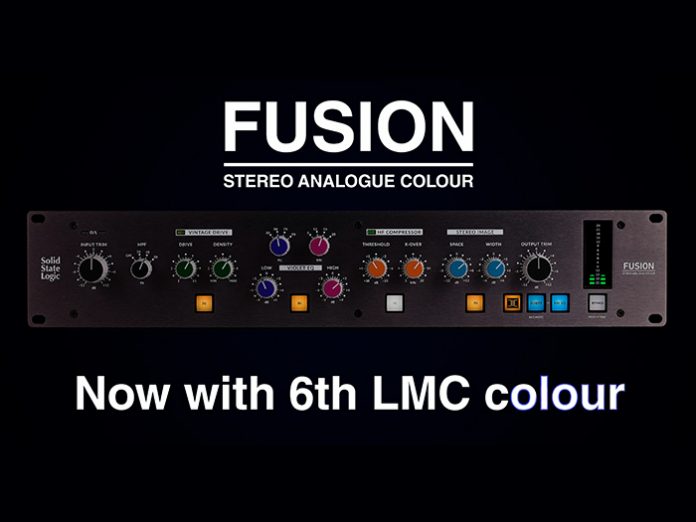 Just two years after its launch at AES in 2018, Solid State Logic’s Fusion outboard processor has become an indispensable tool for the modern hybrid studio. With an incredibly versatile set of features for tracking, mixing and mastering, Fusion introduced five distinct colours to help users realize the perfect combination of added tonal character, weight and space to stereo stems — with the detail, warmth and finesse that only real analogue circuits can provide. Now, SSL unveils a sixth colour, already present in Fusion: a full-band LMC processor with wet/dry control.

“Part of the mystique within SSL’s music creation tools is how they give back over time.” commented Andy Jackson, Studio Product Manager of Solid State Logic “During the development of FUSION, we experimented and trailed many variants of the five analogue circuits. One variant of particular interest was an alternative mode for the HF Compressor section, making it operate across the full audio spectrum. As the design of the HF Compressor section was based on the legendary SSL Listen Mic Compressor circuit, it came as no surprise that this alternative mode sounded damn cool. Two years on, it’s finally time to reveal this special audio treat to our FUSION family, giving everyone a sixth “secret” colour to get creative with.”

By pushing and holding the HF Compressor button on Fusion’s front panel for five seconds, users can unlock ‘full band LMC mode’. When in LMC mode, the X-OVER knob turns into a ‘Wet/Dry’ control — providing the ultimate LMC processing with parallel control. This feature already exists in all Fusion units, no update required.

The SSL Listen Mic Compressor — whose origins derive from the famed SSL 4000 series consoles — was a ‘secret weapon’ among producers and many say was the catalyst for that 80’s drum sound, which prominently features tracks of the era, including the classic ‘In The Air Tonight’ by Phil Collins. Originally designed to prevent overloading the return feed from a studio communications mic, the LMC’s fixed attack and release curves were soon discovered to be eminently suitable on drums, and equally interesting on guitars, vocals and many other instruments.

Everyone at SSL (especially R&D) would like to thank all the present and future Fusion owners and hope you enjoy the new LMC processing feature.