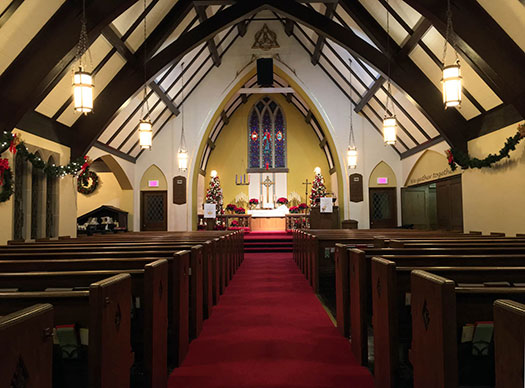 The Gothic, limestone structure of Trinity is considerably longer than it is wide, and its stained glass and ornate architecture make it a beautiful and transcendent place to worship.

These days, Trinity holds two Sunday services, one in a more traditional style and one that’s more contemporary. Though beautiful, the Sanctuary has been challenged by unintelligible sound quality and poor gain-before-feedback. In order to address these issues, the church called on Peoria-based Advanced Audio & Lighting Systems, who solved these problems with the excellent pattern control and point-source purity of a single Danley Sound Labs SM-96 loudspeaker.

“There were several challenges at Trinity Evangelical,” said Ryan Winstead, Sales and Design Consultant at Advanced Audio & Lighting Systems. “The pastor wears a wireless mic and likes to move about to engage the parishioners, and the praise band is positioned in a nook to the side in back of the platform. Regardless, the low-mid energy from the old front-loaded boxes they had been using found its way everywhere and made it impossible to get an open microphone stable at an adequate volume.”

He continued, “They really needed a design that took the acoustics into account, accomplished their goals and would fit into their budget. I did an EASE model to verify loudspeaker coverage, and it quickly became apparent that the most accommodating places to put loudspeakers were already claimed by stained glass, holy symbols, or the projection screen. That screen had the one piece of real estate we would have liked most of all, but they really didn’t have any other place to mount a screen. Truly, the only solution that would give them deep pattern control to energise the seats but not the stage, walls, or ceiling, was a Danley SM-96. It gave us perfect coverage, great fidelity, very efficient output, and worked in the available mounting location.”

Winstead gave the pastor a new Countryman E6 headset microphone with a Shure QLXD wireless system. This element had much better directionality & fidelity than his previous microphone. His team mounted the Danley SM-96 transverse to match the depth and breadth of the room. “It’s rare to need 90° vertical and only 60° wide, but the shape of Trinity Evangelical’s sanctuary demanded it,” he said. “That way, we kept energy squarely on the listeners and away from the platform, which is directly below the hang, and the band ‘nook.’” A PowerSoft M30 provides both processing and amplification for the new system.

The church is thrilled with the upgrade, which now delivers an even +/-4dB from the front of the room to the back of the room. “The congregation has been wowed, and the comments on sound quality and clarity are still coming at a steady pace (weekly)” said Jason Van Cauwenberge, who volunteers as Trinity Evangelical’s sound engineer. Winstead added, “With a system designed specifically for their space, Trinity’s parishioners now enjoy the same clear, high-quality listening experience regardless of where they sit in the Sanctuary. The unique design and pattern control of the Danley SM-96 makes this possible, even in a challenging acoustic space. ”