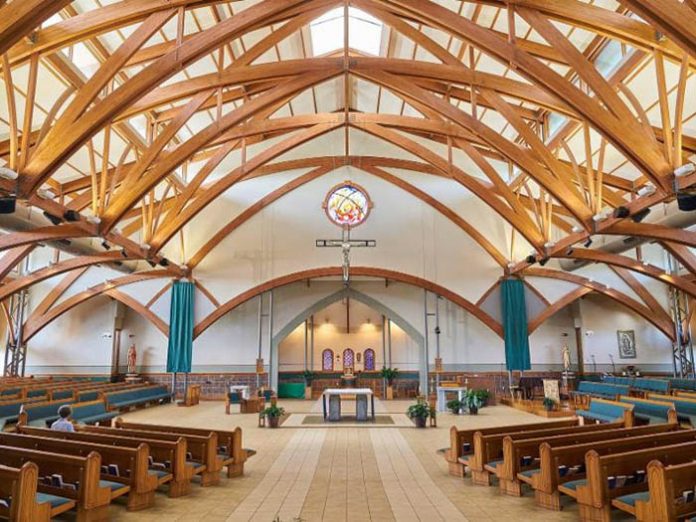 Founded in 1944 in Belton Missouri as a Catholic parish community, Saint Sabina is committed to providing faith formation for all people. In 2003, the parish dedicated an architecturally unique worship space that enables greater accessibility and versatility to serve their diverse and growing congregation. Following numerous PA upgrades, leading Kansas City AV integrator Advanced Sound & Communication (ASC) was selected to design and install a system to make Saint Sabina Church sound as remarkable as it looks.

“Previous Saint Sabina Church sound systems using line array and column speakers failed to provide clear, uniform coverage throughout the sanctuary,” explained ASC systems consultant Brent Handy. “Rather than using a long 55-foot throw to the back of the church, our approach was to get high-fidelity, point-source speakers as close to the congregation as possible to provide the same tone and sonic character to everyone.”

Brent based his design on Fulcrum Acoustic’s compact CX Series coaxial loudspeakers. To cover the centre liturgical area, he deployed four downward-firing Fulcrum CX896 8-inch coaxial speakers with 90° x 60° dispersion along the side wooden trusses. Each CX8 is backed by a CCX1265 12-inch cardioid coaxial loudspeaker on the opposite side of the truss directed at the horseshoe-shaped seating area. Two standalone CCX1265s with 60° x 45° horns provide even coverage for seating closest to the church entrance.

“Fulcrum had just launched their cardioid CCX product family, applying their patented Passive Cardioid Technology to their best-selling line of compact coaxial installation loudspeakers,” stated Brent. “The timing couldn’t have worked out better for us as this truss-speaker design approach demanded cardioid patterns to minimise LF blowback and work within the architecture rather than fight against it.”

“When Father Jeff Stephan uttered his first hello with the new system, parishioners had never heard such volume and clarity in their church,” remarked Brent. “Saint Sabina’s diverse musical styles include traditional keyboard with choir, contemporary instrumentation with praise singers, and Hispanic Ministry Masses with four guitars, two keyboards and drums playing upbeat Mexican arrangements. Church members love the musicality of their new Fulcrum system which made their older systems sound like AM radios. And as far as Father Jeff’s homilies, well, he had them at hello.”