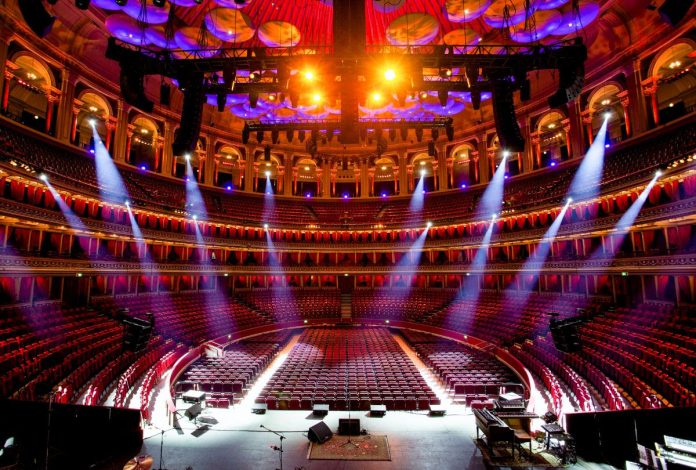 Both orders were fulfilled by theatre lighting specialists, White Light, with all Martin lighting products sourced from their UK distributors Sound Technology Ltd.

According to RAH Lighting Designer Richard Thomas, this is the third straight swap out to Martin lighting over the past four years, as prior to that a complement of MAC Vipers had also been chosen as replacement wash lights.

“However, we are not driven by brands,” he stated. “We pick the lighting based on what’s best for us. In the case of the MAC Ultras we looked at a number of top brands but this fixture ticked all the boxes.”

“I think [the RAH] was aware of just how many MAC Encores there were in the field, including installations in other key London theatres. This has given them a top-notch rig as they continue to do bigger and better things by renting their lighting to incoming shows. They have definitely made a significant investment.”

His company also has a service agreement with the venue and maintains all its equipment. “I have had a long relationship Rich Thomas and [head of production and technical] Ollie Jeffery and they have remained very loyal to White Light.”

When the concert hall was ready to retire its old halogen units back in 2019 the search began for a super bright LED replacement.

Richard Thomas takes up the story. “We wanted the functionality that the previous fixture gave us — which was special keylight for camera and lighting people’s faces. But there was no like-for-like replacement. We had actually been looking for a lower end spec, with framing and iris, and so not only did the MAC Encore’s gobos become an extra feature for us but so did the colour mixing. Another key feature was the silent running as the rig also needs to cater for orchestral events.”

The Encores, which were supplied with the heavy frost assembly, were used regularly and reliably during the season before lockdown rendered all theatres dark, from their position on downstage trusses.

“We went for the CLD version as it’s brighter than the WRM.” he continue. “For a 12m-14m throw we needed the greater output and besides, we can use the variable CTO, which is really good, for lighting faces.”

When it came to the MAC Ultras, the venue knew it needed a super-powerful and reliable LED replacement for their discharge fixture.

According to Jonathan Haynes, “The Ultras weren’t around at the time we first discussed it … but then it fell into place at exactly the right time.”

Sound Technology’s Joe East and Chris Walker arranged the site demo and again the framing spot was put through its paces and having impressed all involved, a subsequent order for 26 units was placed with White Light.

The MAC Ultras are positioned three levels up on the circle, in the gallery, and on a central circular truss.

“The MAC Ultras’ native light and quality of light is fantastic while there is also the graphic possibility of layering gobos, while maintaining a high light output.” says Richard Thomas.

“The main goal was to replace the previous fixture with LED, in the knowledge that the units also had framing and animation effects. In fact the framing is a bonus which we can use far more than before. For instance often the stairways are used as an entrance to shows so we can now frame them off.”

The incredibly low noise floor of the super-high output fixtures has proven to be a real benefit.

“Given their proximity to the audience, the MAC Ultra’s quietness is just incredible even at high output.” says Thomas. “This allows us to use them, unlike our previous fixtures, to enhance all events including orchestral concerts.

“Finally, from a Health & Safety point of view we appreciate the handles on the bottom of the yokes which makes rigging and derigging, particularly on the circle rail a lot safer.”

“We are extremely impressed so far,” summarised Richard Thomas, part of whose role at the theatre is lighting design and programming for shows that don’t bring their own tech teams. “What can I say, the MAC Utras just work! But then I wouldn’t expect anything else.”

Martin Professional is exclusively distributed in the UK by Sound Technology Ltd.