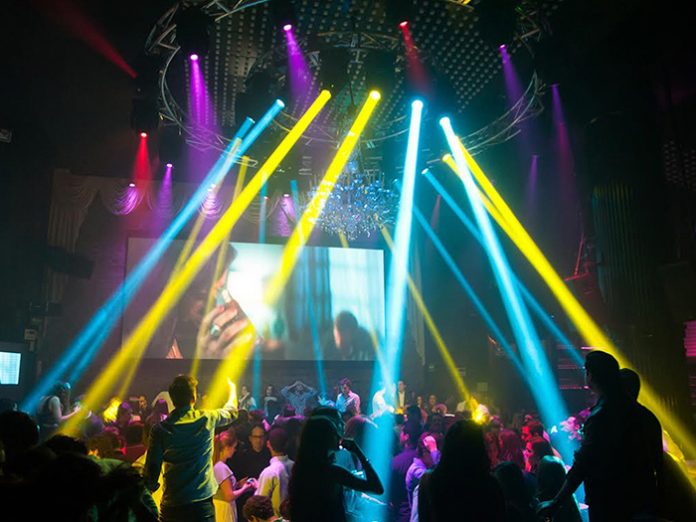 With a population bigger than New York’s and a colourful street scene that never quits, Mexico’s capital lives up to its reputation as North America’s “Maximum City.” A crown jewel of Mexico City’s club scene is Hyde, a gathering spot for beautiful people from across the globe. Decorated with LED panels and colour changing Swarovski candelabrums, the club makes a powerful visual impression. Recently that impression was ramped up even further by the installation of a new lighting system featuring 32 Rogue fixtures from Chauvet Professional.

The new lighting design is built around two concentric circular structures in the middle of the ceiling, which were positioned around a huge candelabrum/chandelier fixture. Positioned on the two circular structures, the 32 Rogue fixtures energise the club with their razor sharp beams and rapid movements.

Motorised drivers are used to change the height and tilt of the circular structures to create different layered looks during the evening. The prism layering capabilities of the Rogue RH1 Hybrid also allowed Molina and Meacham to add more depth to the club’s lighting design. Haze from a pair of Amhaze II machines accentuates the impact of the Rogue beams.

Rodrigo discussed the strategy behind the installation of the new lighting system. “The fixtures previously installed in the club were Intimidator series moving heads from Chauvet DJ, and the administration was very pleased with the performance and reliability of these lights,” he said. “When finally the decision to upgrade the lighting rig was made, moving heads of several brands were considered, including the Rogue series. The final decision was not too hard, considering the good previous experience with other fixtures of the brand, and cost-benefit relation that they offer.

“The new Rogue fixtures produce very sharp and intense beams,” continued Rodrigo. “Also, from the beginning of the process, Chauvet Mexico accompanied us and gave us all the support for the extraordinary result that we have achieved. One of the valuable ‘extras’ that we got from them, was to put us in contact with the famous LD Michael Meacham, who drew on his international design experience to create a spectacular and immersive lighting design. Michael’s sense of commitment was amazing.”

Also amazing is the end result of this collaborative effort. “We’ve gotten so many people praising the impact of the new design,” said Abraham Levit, Manager of Chauvet Mexico. “It’s nice when you see a club that’s already at the top level take steps to become even better.”